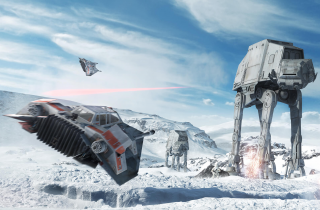 He did not have the request requisite hours in a T-47 Airspeeder, but was current and qualified in both the T-65B X-Wing and the T-16 Skyhopper.  Of note, Alliance Starfighter Command senior leadership regarded all three Incom platforms as interchangeable for training purposes, despite the widely divergent mission sets and mission environments.

During the disastrous Battle for Hoth, a locally modified version of the Incom T-47 Airspeeder was engaged in close proximity to advancing Stormtrooper infantry and heavily armored All-Terrain Armored Transport (AT-AT) units of the Imperial Army led by General Maximillian Veers. During the battle, the mishap pilot brought the mishap aircraft within close proximity of the advancing AT-ATs and often in direct line of fire of their weaponry. The mishap aircraft was eventually struck and downed, resulting in the death of the mishap gunner and the total loss of the hull.

This article by Matt Wright originally appeared on The Angry Staff Officer in 2018.

The board president found clear and convincing evidence that the cause of the mishap was due to the pilot failing heed sound crew resource management (CRM) principles and ignoring repeated warnings from the mishap gunner regarding failed mission essential systems. Furthermore, the board found other causal factors relating to poor maintenance standards and practices, and contributing factors relating to unsound tactics, techniques, and procedures (TTPs).

The mishap aircraft (MA) was a T-47 Airspeeder, built and developed by Incom and delivered to the Alliance in the base Speeder format. Upon assignment to Hoth, it was noted detachment-wide that the Speeder variant could not perform to designed standards due to the extreme cold weather prevalent on the planet. Inspection of surviving T-47’s revealed that most were modified with locally manufactured heat exchangers in proximity to the power generator units (PGU), as the PGUs reportedly would exceed designed measured generator temperature (MGT) in order to keep essential operating systems at designed temperatures. As this deficiency was not reported through proper channels, no new aircraft limitations or preflight warm-up procedures were implemented, and the effects of the unauthorized modification were not available for operational test & evaluation (OT&E). Furthermore, study into maintenance practices revealed several discrepancies. It was fortunate that the majority of the maintenance records were uploaded to the lead escape craft data banks. Several of the assigned T-47 aircraft that participated in the mission sortie had open discrepancies in their forms, most of which were mission essential items. Additionally, it was noted fleet-wide with the T-47 fleet that laser output, which were local modifications including installation of Corellian Engineering Company (CEC) AP/11 Double lasers, degraded on the platform, reducing the effectiveness against Imperial armored units. Output was sufficient to damage All Terrain Scout Transports (hereafter, Scout Walkers) but insufficient for penetration of AT-AT armor. Hoth Maintenance Group (HMXG) sent engineering disposition (ED) requests to Incom for an enterprise solution, as HMXG lacked the technical guidance and equipment for laser repair. CEC was unavailable to provide technical advice, due to the on-going occupation of Corellia by the Empire.  The EDs provided by Incom, in conjunction with CEC setbacks, granted HMXG the authority to delay calibrating laser output until the next depot maintenance input per speeder. The mishap aircraft itself had several aircrew noted discrepancies regarding electrical faults in the harpoon assembly. HMXG repeatedly refused to repair the assembly, citing the T-47 MESL as listing the assembly as not required for non-cargo movements. The discrepancy was eventually entered into the delayed discrepancies for repair during the next phase inspection. Unfortunately, the flight data recorder was not recovered, as Imperial forces maintained a small garrison on the planet after the evacuation of Echo Base. Due to this, engine and system operation parameters captured during the mishap sortie could not be analyzed.

The mishap crew (MC) consisted of the mishap pilot (MP) and mishap gunner (MG). The MP was a highly regarded pilot due to his exemplary performance during the destruction of the Death Star. He had been in Squadron Command for approximately two years at the time of mishap.  He did not have the request requisite hours in a T-47 Airspeeder, but was current and qualified in both the T-65B X-Wing and the T-16 Skyhopper. Of note, Alliance Starfighter Command senior leadership regarded all three Incom platforms as interchangeable for training purposes, despite the widely divergent mission sets and mission environments.  He was upgraded to aircraft commander and flight lead with a flight-hour waiver endorsed by several high ranking members of the Alliance. Despite his resounding technical competency as a pilot, interviews conducted by the board in the course of the investigation revealed a tendency for the MP to display four of the five hazardous attitudes of a pilot: impulsivity, antiauthority, invulnerability, and machoism. The MP executed the sortie as the flight lead for Rogue Squadron with little to no mission planning, and while executing the sortie within the parameters Attack Pattern Delta, the MP failed to consider alternate methods of attack.

The AIB had considerable difficulty in obtaining and analyzing the flight and training records of the MG due to the loss of critical Alliance Personnel Center records during the evacuation of Yavin IV. During the course of the investigation, interviews from surviving squadron members revealed the MG was technically and tactically competent. Furthermore, it was discovered that the MG repeatedly expressed concerns to squadron leadership about being assigned with the MP over consistent CRM breakdowns between the two. In a hologram interview, the MP acknowledged that the MG expressed concerns over the lack of appropriate approach path vectors for the run-in route to attack an Imperial AT-AT. The MP also stated he dismissed the concerns regarding the approach and continued the run-in, even after the MG stated additional concerns that the harpoon assembly primary fire control assembly had failed and that more time would be required to engage the auxiliary controller. Eventually, the MA was struck by enemy fire while making a head-on pass to engage the legs of the AT-AT in an attempt to bind them with the harpoon assembly. The aircraft crashed in vicinity of the AT-AT, with the MP egressing the aircraft and assaulting the AT-AT on foot, successfully destroying the enemy armor.  MG did not survive the crash, with MG’s remains remaining unrecovered due to the airframe being crushed by an advancing AT-AT.

With clear and convincing evidence, the board has determined the primary causal factor of the accident to be pilot error. Ignoring several warnings from the MG, the MP failed to break off the run-in for the planned engagement allowing time for the MG to both correct for the failed approach path solution and ensure the proper operation of the harpoon assembly. The MA’s aggressive flying and disregard for sound tactics placed the MA directly in the line of fire of enemy fire with the MG being channelized and heads down in the aircraft during a critical phase of flight, as opposed to being actively participating in the engagement and practicing sound threat clearing techniques.

As contributory factors, the board finds that the lackadaisical maintenance culture in the HMXG led to aircraft being launched that were partially to non-mission capable. While the board recognizes this sortie was an all-out defense of the facility, and that all aircraft capable to launch would sortie, had proper maintenance procedures be followed in the time prior to the invasion, the board finds that attrition rates would most likely have been lower. Also noted as a contributory factor were the poor tactics, techniques, and procedures used during the mission. Although technically in compliance with standing doctrine, it should be expected of Alliance flight leaders and pilots to adapt to a rapidly evolving battlefield to ensure mission success.

About the Author:  Matt Wright is an Air Force Reserve C-5M Flight Engineer and civilian law enforcement officer. He may not be a Star Wars expert, but he loves all things aviation and aviation-safety related. He can be found on Twitter at @C130Matt.

About the Editor: Angry Staff Officer is an Army engineer officer who is adrift in a sea of doctrine and staff operations and uses writing as a means to retain his sanity. He also collaborates on a podcast with Adin Dobkin entitled War Stories, which examines key moments in the history of warfare.

This article by Matt Wright originally appeared on The Angry Staff Officer in 2018.