How America Can Win Turkey Back from Russia by Using Syria 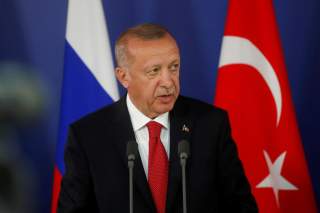 Syria’s civil war is entering yet another phase with the regime of Bashar al-Assad continuing its quest to re-conquer every inch of his country that rebelled over eight years of civil war. Now the fighting has focused on the final stronghold of Syria’s resistance, Idlib. Located in Syria’s northwest on the border with Turkey, Idlib province is home to over three million civilians and thousands of rebels, moderates and extremists alike, who oppose the Assad government.

Since September 2018, the province has been subject to a ceasefire agreed upon by Russia,and Turkey, the main benefactors for each side. For months the agreement worked to reduce violence in Idlib, but this all ended in May when Damascus, with Russian support, launched a ground offensive to reclaim the province. Since May, the fighting has killed thousands on both sides and displaced over 450,000 civilians from their homes, raising the specter of a new wave of refugees heading to Turkey for safety.

Turkey has found itself in a precarious situation since entering Syria’s quagmire. Turkish forces at observation posts set up under the ceasefire arrangement have found themselves under fire from the regime and their appeals to Moscow have done little. Officials at Russia’s Foreign Ministry have increasingly provided cover for the regime through repeatedly reiterating it’s sovereignty in response to Turkish operations across Syria. Echoing Syrian officials, Russian diplomats called on Turkey to request Damascus’ permission for any future operations on its territory and that other Turkish holdings have to be returned to the regime. This remark was pointedly directed at the cantons Turkey seized as part of its anti-YPG Operation Euphrates Shield which Russia previously greenlighted.

Additionally, Moscow accuses Ankara of not upholding its end of the bargain by failing to disarm or remove extremist elements, whose presence Assad used as a pretext to violate the Turkish-Russian ceasefire. So far, Turkey appears to be accepting the fragility of its position. Not long after a meeting in Moscow about Idlib, Erdogan referred to the ceasefire a “safe zone in name only,” a not-so subtle acknowledgement of Turkey’s failing partnership with Russia. Therein lies a golden opportunity for the United States.

For years, Turkey’s collaboration with Russia bedeviled Washington but now a rift has emerged that can push both sides towards a divorce if acted on decisively. To be sure, the Trump administration expresses mixed signals about its overall policy in Syria. President Trump himself wants to see an end to American military commitments following the defeat of the Islamic State, a move initially enacted but then retracted. Others wanted to see an American footprint remain to combat Iranian influence and ensure ISIS does not reconstitute itself following a U.S withdrawal.

Supporting Turkey in Idlib may be a tough sell in Washington, particularly after Turkish threats in the past to attack American troops in Syria and the purchasing of the Russian S-400 defense platform that ran afoul of U.S law. Despite these shortcomings, the U.S should recognise how squeezed for options Turkey is as Russia pushes Idlib towards implosion. Amidst a weakening economy and increased coolness towards Syrian migrants, Idlib’s fall and the accompanying challenges represent an existential threat to Turkish stability.

Moscow has expressed displeasure with a recent U.S-Turkey deal for a safe-zone in northeastern Syria that would de-escalate hostilities between the YPG and the Turkish military. Russia has condemned the arrangement as an infringement on Syria’s territorial sovereignty. It is no coincidence that Russia’s recent disregard for Turkey through enabling the attacks on Idlib began shortly after this deal was announced. However, in tightening the noose around Turkey, Russia is repeating the same behavior that led the Turks to seek Russian partnership in the first place.

The U.S alliance with the Kurdish YPG against ISIS was seen by Ankara as a blatant disregard of Turkish concerns because of ties between them and the Kurdistan Workers’ Party (PKK). Seeing this division, Russia was happy to acquiesce to Turkey attacks on the Kurds to deepen the freeze in its ties to America. Now the situation is reversed. Russia is the one disregarding Turkish interests by abrogating on their ceasefire in Idlib, knowing full well what it’s collapse would mean for Turkey.

The U.S should do everything possible to ensure its own deal succeeds in keeping the YPG and Turkish military apart while being careful not to be seen as catering too much to one side or the other. Through this a sense of trust can be restored in Ankara at the expense of Moscow. Already President Erdogan has shown a keen capacity to work with President Trump. In some cases it was clearly inimical to U.S interests, be it a phone call between the two that initially convinced Trump to withdraw from Syria, or a last minute meeting that stalled new American sanctions over the S-400. However, Erdogan has praised Trump’s decision to twice attack Assad’s military over the use of chemical weapons.

As Turkey announced plans for Erdogan to discuss the situation in Idlib with President Putin, it tellingly included notice that he would discuss it with President Trump as well. Trump already once warned Russia and its allies to refrain from an Idlib offensive. If the deal to separate the YPG and Turkey endures, the U.S can afford to focus more on Idlib where it's envoy to Syria Jim Jeffrey has testified that Turkish and American interests are more aligned. This can come in the form of a pledge to protect Turkey from chemical attack, which would not be without reason given that Khan Sheikoun in Idlib was the sight of the first American missile strikes against the regime in 2017.

The U.S can even declare its support to Turkey in carrying out its obligations that it previously agreed upon with Russia. A credible U.S pledge to assist and protect Turkey from attack in Idlib could do much to curtail actions that risk wider confrontation as well as encourage Russia to restrain Assad from targeting Turkish positions. It can also provide Turkey with new diplomatic leverage ahead of future meetings with Putin which could enable a renewal of the initial ceasefire.

Finally, the U.S can support Turkey by helping it target extremists within Idlib. One of the dangers that accompanies defeat in Idlib would be the migration of fighters to regions closer to or inside Turkey itself. The presence of these militants are what provide Russia and Assad their excuse for an Idlib offensive, and is what makes Turkey’s side of the initial ceasefire deal more difficult to fulfill. There is a clear interest on the part of the Americans in helping Turkey deliver on its pledges to Russia.

U.S officials have called Idlib the largest collection of al-Qaeda linked factions presently in existence and recently conducted strikes to debilitate this threat. The U.S has limited intelligence on on HTS according to defense officials, especially considering its present exclusion from Idlib because of the Turkey-Russia deal. However, both can engage in sharing information related to these groups to better enable Turkey or its proxies to dismantle or remove the group’s most dangerous elements on the ground.

Syria has in many ways been the engine of division between the United States and Turkey. It had led to a restoration of Turkish-Russian ties and pushed the two allies to the brink of confrontation. Now as the war intensifies once more, the pendulum has swung in a direction that creates favorable circumstances for a renewed U.S-Turkey partnership. While it does not clear the way of all of the tension that exists between the two, providing aid to Turkey in an hour of desperation can do much to win new influence in Syria’s aftermath and wrench Turkey further away from Russia.

Nicholas Morgan is an independent security analyst, specializing in Russia and Turkey and is presently based in New York City. Follow him on Twitter @NikMorgan10.