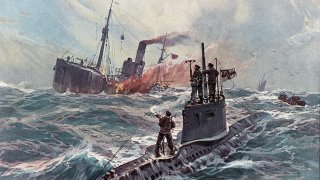 Key point: The Navy's experience was gained with blood, but it would help again against the Nazis during the Second Battle of the Atlantic.

Despite its unglamorous duties, the U.S. Navy learned valuable lessons in the Great War about employing convoys, smaller submarine-hunters and maritime patrol planes that would save many lives in the even more destructive conflict that followed two decades later.