How America Will Win the Next War (Against Russia or China?): Winning the Battle Network Challenge 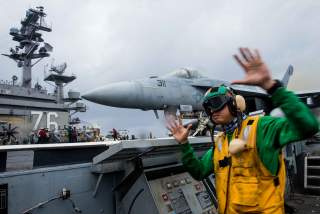 Communications are another area where destroying the enemy’s battle network may not be the most effective approach. In previous competitions exploiting communications was sometimes more useful than merely disrupting them, based in large part on the pace and tempo of operations. For example, submarine operations unfold over days or weeks, whereas air operations tend to be completed in a matter of hours. This makes it likely that adversary communications can be intercepted, decoded, analyzed, and the results transmitted to submarines or convoys in time for them to intercept or avoid the enemy, respectively. In contrast, air operations happen so quickly that the competitors able to disrupt, rather than exploit, enemy communications were more successful in previous conflicts.

What About the Future?

Our analysis also revealed some interesting findings about the future of submarine vs. ASW and air strike vs. air defense competitions. In both cases, the pace of technology moves and countermoves accelerated during periods of conflict, particularly with regard to capabilities to find and target the battle network’s central platform (e.g., submarines or aircraft). These “hider-finder” competitions were exemplified by radar vs. electronic warfare in air operations and sonar vs. sound silencing in submarine warfare. Eventually these cycles reached a pace so rapid that one side was either unable to keep up or was able to force the competition into a new “competitive regime” by reducing or eliminating the physical phenomena used to detect and localize the central platform.

An example of this dynamic is America’s development of stealth aircraft technology in the closing years of the Cold War. After decades of radar competing against active electronic warfare in the air warfare hider-finder competition, stealth aircraft shifted the competition into a new regime with active radars confronting passive radar signature reduction techniques. Today, competitors to the U.S. military, such as China and Russia, are developing their own stealth aircraft while they and other potential U.S. adversaries develop new detection technologies designed to find stealth aircraft including infrared systems, multi-static and lower-frequency radars, and electro-optical sensors. As this hider-finder competition continues, the move-countermove cycle will continue until one side or the other shifts it to a new regime. One possible new regime would be for aircraft to use electronic warfare plus stealth to avoid detection.

Until the end of World War II the submarine vs. ASW competitive regime played out in the electromagnetic (EM) spectrum. This is because submarines through the mid-1940s were submersibles rather than true submarines. They spent the majority of their time on the surface and only submerged to covertly attack or to evade ASW forces. This made them susceptible to radar detection and communications exploitation, resulting in a competition between Allied radars and Axis radar warning receivers and code making and breaking by both sides. In 1945, however, Germany was prepared to shift to a new competitive regime by fielding a new class of submarines with snorkels that would make them much less susceptible to detection by radar. This, along with better warning receivers and less-detectable “burst” radio communications, would have taken the new submarine out of the EM spectrum and compelled the Allies to rely on still-immature sonar to find submarines. Luckily for them, the war ended before Germany was able to field the new submarine in significant numbers.

American ASW forces were similarly “saved by the bell” (to use Owen Cote’s great phrase) at the end of the Cold War. The passive sonar competitive regime in place since World War II was about to give way as Soviet submarines began to approach the sound silencing levels of all but the quietest U.S. boats. But the Berlin Wall fell before the Soviets could field a meaningful number of quiet submarines. The submarine-ASW competition remained in stasis until today due to the significant U.S. advantage in submarine silencing. As U.S. rivals improve the quieting of their undersea fleets, however, this competition will eventually shift to a new regime, one exemplified by perhaps low frequency active sonar, non-acoustic detection techniques, or some as yet unexploited technology or approach.

At the turn of the last century the airplane and submarine emerged as significant military capabilities that promised to dramatically change the nature of military campaigns. Aircraft brought speed and greater visibility to the battle while submarines expanded the theater of conflict to the high seas well away from the front lines. Insights from the study of the century of competitions that ensued remain relevant today because of the enduring characteristics of submarines and aircraft and the physics involved in hiding or finding them. We should therefore focus our science and technology investments in identifying the next competitive regimes for each and beginning to develop advantages in them.

Editor’s Note: This article was inspired from the following report: “What it Takes to Win: Succeeding in 21st Century Battle Network Competitions” which is available here.