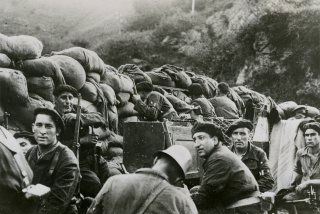 Civil Wars are anything but civil, and in many cases can make for stranger bedfellows than normal politics. This certainly could describe the situation in Spain. The Spanish Civil War (1936–39) that was considered a dress rehearsal for the Second World War where Germany tested new ways of empowering attack aircraft to support ground troops as well as terror bombing campaigns, but so too did the Soviet Union use the fields of Spain as a testing ground for armored warfare.

Today, thanks to the hindsight of history⁠—not to mention Ernest Hemingway’s For Whom the Bell Tolls—the war is remembered as the International Brigades fighting alongside the Republican forces to stop Francisco Franco and his fascist Nationalists, who were supported by Nazi Germany and Fascist Italy.

However, often overlooked is the fact that Spanish Stalinists were part of the Republican cause, and murdered priests and nuns, burned churches and purged their political rivals along the way. That hardly seems to support the argument that the Republicans were fighting for a democratic Spain.

But then there is the fact that Franco maintained that he was fighting in the name of Spanish nationalism but couldn't have won the war without that support from Germany and Italy. Moreover, Franco who also claimed to be defending the Catholic Church relied heavily on the Army of Africa. As its name suggests it wasn't exactly a Spanish national force⁠—but was made up of African troops, most of whom were Muslim!

These were certainly among the strangest bedfellows of the war, given that the Moors of North Africa had been seen for centuries as the traditional religious and racial enemy of Spain. While Franco remained one of Europe’s most adamantly Christian military leaders (and later national head of state), he propagated surprisingly positive views of the Muslim soldiers and even Islam.

Those Spanish officers who served in Spain’s African colonies had understood the tenacity of the soldiers, but also saw the potential for a Spanish-Moroccan brotherhood that was impossible with other European powers and their colonial territories and subjects.

During the Rif War, which was fought between Spain and later France against the Berber tribes of the Rif mountain region of Morocco, Spain had faced a series of setbacks. But things turned around when the Spanish government raised a force based on the French Foreign Legion. While less than 25 percent of the new Spanish Foreign Legion were in fact non-Spanish, the force was heavily disciplined and became a serious fighting force. In addition, more reliance was placed on the professional units of the Moroccan Regulares.

It was those units that helped turn the tide and ensure Spanish victory and brought defeat to the Republic of the Rif in 1927. The second-in-command of that new force was Francisco Franco, who rose through the ranks and at 33 years of age became the youngest general in Spain.

After the establishment of the Second Republic, Franco served in the Spanish Republican Army and was even elevated to Chief of Army Staff. However, after some reluctance, he joined the military coup that sparked the civil war in Spain.

While he wasn’t its leader at its start, due to the untimely death of the other Nationalist heads, he emerged as the top Nationalist general. He was able to win the support of the forces in Morocco and took charge of the some thirty thousand troops serving in the Army of Africa. It was then made up of units of the Spanish Foreign Legion and the Moroccan Regulares regiments.

He easily gained control and thus the loyalty of the largely Muslim force, but he had to get that army to Spain. After the Spanish Navy remained loyal to the Republican government, Franco reached out to Italian dictator Benito Mussolini, who offered unconditional support with arms and planes. Germany's Wilhelm Canaris, who headed the Abwehr⁠—Nazi Germany's military intelligence branch⁠—arranged for German aircraft to aid the Nationalist cause.

Some twenty-two Junkers Ju-52 transport aircraft, which was Nazi Germany’s primary troop carrier in World War II, were used to transport the Army of Africa in waves from Morocco to Spain. Upon arrival, it was split into two forces and came to be Franco's elite spearhead force known for both its professionalism and brutality. The Army of Africa played a crucial role in early Nationalist successes including the taking of Seville, Granada and Córdoba.

After the war, the colonial force maintained a higher profile in Spain than it had under the prior monarchy or republic. When Morocco gained its independence in 1956 the bulk of the Regulares transferred to the newly established Royal Moroccan Army. Yet, it is impossible to think of a Nationalist victory without its Muslim volunteer force.