This is How the Army Fights Wars "In the Dark" 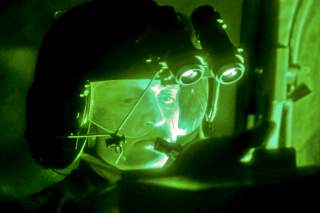 In the 2000s, the U.S. Army fielded the AN/PSQ-20 Enhanced Night Vision Goggle (ENVG I). The ENVG I combined thermal imaging and image intensification technology to give soldiers the ability to see both in the thermal spectrum and in regular night vision in a capability sometimes called “fusion” or “fused” vision. Now, this technology appears to be ready for the prime time, with most major night vision companies making optics with fusion vision technology.

But how does it work? What advantages do fusion vision optics provide?

When fusion vision first came out in the ENVG I, it was not very popular with troops. The monocle was far heavier than the PVS-14 it replaced and the advanced electronics drained batteries quickly. Unlike the PVS-15 binocular NVGs, soldiers wearing it had no depth perception.

However, the actual vision provided by the goggle was considered to be groundbreaking. Thermal imagers are great at spotting targets, but often have a relatively short range and don’t render all the terrain in an image. On the other hand, night vision renders terrain fairly clearly but can be tricked with camouflage as it still operates in the visual and near-infrared spectrum.

The ENVG I overlaid the thermal image on top of the image intensified view in a “fusion” image that allowed a soldier to spot targets while also seeing the terrain in night vision. The goggle accomplished this by having two imagers, one for the thermal image and one for image intensification. The need to drive two apertures resulted in the decreased battery life and increased bulk of the ENVG I.

The weight and power aspects were improved in the ENVG II or AN/PSQ-20A, which was fielded sometime in the late 2000s or early 2010s.

But the biggest capability increase would come in the ENVG III, or AN/PSQ-20B developed around 2015 and fielded slightly after that. Earlier iterations of the ENVG are known to have two modes, fused vision, or image intensification only. The ENVG III adds more modes to the thermal imager to enhance target detection capabilities.

In addition to image intensification and thermal only, there are three fusion modes. Overlay, which displays the hotter parts of the thermal image only; outline, where thermal signatures are highlighted in a bright white outline to make them easier to spot; and full thermal, which places the full thermal image over the full image intensification picture.

However the ENVG III truly goes above the competition in its ability to interface with the Family of Weapon Sights-Individual (FWS-I) optic, a thermal imager mounted directly to a soldier’s rifle. The ENVG III can wirelessly display the FWS-I’s view inside the goggle’s picture, with a projected crosshair, allowing the soldier to aim without even using the weapon’s sight, completely passively. A soldier can also point the rifle around obstacles to see and shoot around them without exposing him or herself.

While the rifle-mounted thermal camera capability is nothing new—the French Army has fielded it on the FELIN-FAMAS series of thermal sights and displays since the 2000s—the wireless integration with a fusion NVG with projected crosshair is a new capability that places the ENVG-III and FWS-I as the most advanced and integrated vision system for soldiers fielded today.

The U.S. Army is also already testing the ENVG-B in limited numbers, a binocular night vision device that provides all the features of the ENVG-III to both eyes and links with FWS-I.

The technology also appears to be proliferating within NATO. As stated earlier, the French Thales group makes the Minie-D/IR Fusion NVG. Combining this with the FELIN system could provide the French Army with a similar system to the ENVG/FWS-I combination at a relatively cheap price. Steiner’s clip-on thermal (COT) modules allow for current NVG users to have a thermal overlay without buying a new device. They also make a thermal weapon sight that displays the thermal picture directly over the standard picture in the glass, which highlights thermal signatures in “outline” mode.

Steiner has also mentioned that their clip-on modules can accept other inputs to act as a full-color HUD. This also opens up the possibility to display other information like compass bearing, GPS grids, distance to target, and command information. Theoretically, this could be used to automatically adjust a projected crosshair for range to target for point and shoot capability out to extended range.

Fusion technology is also popular on dedicated optics for weapons. The European firm Qioptiq manufactures the SAKER fused weapon sight, which features many advanced modes and has been around since the early 2010s. Dedicated fusion weapon sights were noted to be very effective in the Northern Wind 2019 exercise.

However, fusion vision technology still has one hurdle to overcome: utilizing the fusion vision mode still consumes an incredible amount of battery power. For the Thales Minie-D imager, runtime on just regular image intensification night vision is forty hours, but only 2.5 on fusion mode. The American ENVG-B is supposedly better, with a specification-dictated minimum runtime of 7.5 hours on fusion mode. But battery-limited runtime remains the primary weakness of fusion vision systems.