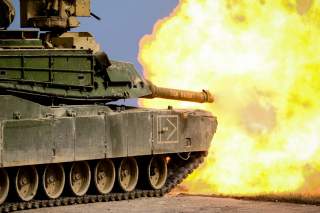 The US Army is preparing to more fully unveil its fast-moving strategic shift toward “Multi-Domain Operations” in coming weeks as part of a long-term effort to further operationalize joint-warfare techniques and tactics.

Senior Army strategists tell Warrior Maven this emerging strategic shift, which is expected to fully roll out at the upcoming annual Association of the US Army Symposium, represents a key next step in the strategic evolution beyond the often discussed “Multi-Domain Battle” initiative.

The advent of long-range sensors and precision fires on the part of potential near-peer adversaries has reinforced the need for the US military to operate in real-time across air, sea and land domains. Furthermore, the emergence of converging newer domains, such as cyber, space and the electromagnetic sphere are naturally an indispensable element of this push to operationalize cross domain warfare.

The nuances of this shift toward “operationalizing” cross-domain fires are further explained in an essay by Training and Doctrine Command Commander Gen. Steven Townsend called “Accelerating Multi-Domain Operations: Evolution of an Idea.”

“In battles, combatants can win time and space and they allow one side to take ground but they do not win wars. The world we operate in today is not defined by battles, but by persistent competition that cycles through varying rates in and out of armed conflict,” Townsend writes.

Townsend’s essay explores the unambiguous reality that modern warfare is by no means restricted to “kinetic” attacks or linear mechanized formations - but rather a mix of interwoven variables across a wide spectrum of conflict areas.

“Winning in competition is not accomplished by winning battles, but through executing integrated operations and campaigning. Operations are more encompassing, bringing together varied tactical actions,” Townsend writes.

As part of the Army’s pursuit of these strategic aims, the Army and Navy have been operating together in the Pacific over the course of this past year. The services have been collaborating to fire Army artillery from Navy ships, send targeting data to land weapons from Navy sensors and use coastal land rockets to destroy enemy ships at sea, service leaders said.

“The Army is looking at shooting artillery off of Navy ships. Innovation is taking existing things and modifying them to do something new,” Maj. Gen. John Ferrari, Director, Program Analysis and Evaluation, G-8, told Warrior Maven in an interview earlier this year.

“Part of what we do is integrate with the Navy. The Naval threat for the Pacific is one of the major threats, so the Army is doing multi-domain battle. The Pacific is inherently Joint. There is very little that we do that is not done with other services,” Ferrari said.

Much of the ongoing work involves integrating combat units which have historically operated in a more separated or “single-focused” fashion. Combing field artillery, a brigade headquarters, air defense, Navy assets and ISR units into a single operation, for instance, represents the kind of experiments now underway.

“Instead of having three battalions of artillery, you will have pieces of these things – then go out and use it,” Ferrari said.

Tactically speaking, firing precision artillery from surface ships could possibly introduce some interesting advantages. The Navy is now exploring weapons such as long-range precision-guided ammunition for its deck-mounted 5-inch guns, ship-fired offensive weapons such as the advanced Long-Range Anti-Ship Missile (LRASM), Maritime Tomahawk and an over-the-horizon weapon for the Littoral Combat Ship and Frigate.

One senior US military official explained that bringing Army artillery to surface ships to compliment existing Navy weapons could bring new dimensions to the surface attack options available to commanders. Tomahawk and LRASM, for instance, can fly lower and somewhat parallel to the surface to elude enemy defensive systems -- something which could potentially be fortified by land-fired weapons.

Land-fired artillery could also lend combat support to extensive layered defensive weapons on Navy ships such as SeaRAM, Evolved Sea Sparrow Missile and Rolling Airframe Missile, among others. These interceptors, it seems, could be strengthened by the potential use of land-fired weapons on Navy ships.

"Mixing all presents multiple dilemmas for the enemy," a senior official told Warrior.

Navy commanders have been “all in” on this as well, previously using F-18s to identify targets for land weapons in exercises in recent years such as Noble Eagle in Alaska, senior military officials have described.

As part of the cross-domain effort, the Army and Navy are looking at improving ways to connect their respective networks; senior Pentagon leaders often say that “joint effects” in combat can be challenged by a lack of integration between different services’ “tactical ISR, target acquisition and fire control systems.”

For example the Navy’s integrated sensor network known as Cooperative Engagement Capability connects targeting and ISR nodes across the force. The emphasis now is to connect these kinds of systems with, for instance, Army weapons such as ground-fired Patriot missiles and Theater High Altitude Area Defense, or THAAD, missile defense weapons.

In addition, the Army’s Integrated Battle Command Systems is itself a comparable combat theater sensor network where various radar, command and control and weapons “nodes” are networked to expedite real-time data sharing. Part of the maturation of this system, according to Army and Northrop Grumman developers, is to further extend IBCS to cue Air Force and Navy assets operating in a given theater of operations.

“It (Multi-Domain Battle) expands the targeting landscape based on the extended ranges and lethality delivered at range by integrated air defenses, cross-domain fire support, and cyber/electronic warfare systems. We must solve the physics of this expanded battlespace and understand the capabilities that each domain can provide in terms of echelon, speed, and reach.”

​Perkins and other senior Pentagon strategists have explained Multi-Domain Battle - which is now leading to “Multi-Domain Operations” -- as a modern extension of the Cold War AirLand Battle Strategy which sought to integrate air and ground attacks to counter a Soviet attack in Europe.

“AirLand Battle started developing the concept of ‘extended battlefield.’ Multi-Domain battle endeavors to integrate capabilities in such a way that to counteract one, the enemy must become more vulnerable to another, creating and exploiting temporary windows of advantage,’ Perkins writes in “Multi-Domain Battle: Joint Combined Arms Concept for the 21st Century.”

The Army and the Air Force have been working on a new, collaborative war-gaming operation to assess future combat scenarios and, ultimately, co-author a new inter-service cross-domain combat doctrine.

Operating within this concept,Army and Air Force senior Commanders are launching a new series of tabletop exercises to replicate and explore future warfare scenarios – the kind of conflicts expected to require technologically advanced Army-Air Force integration.

In a Pentagon report, the joint wargaming effort is described as something which will “turn into a doctrine and concept that we can agree on.”

“The F-35 is doing ISR and could possibly deliver a weapon on the same flight. We can then use what they can generate on the ground, fusing sensors and target acquisition with land-based assets that can deliver effects,” a senior defense official told Warrior.