How the B-52 Bomber Got Its Groove Back 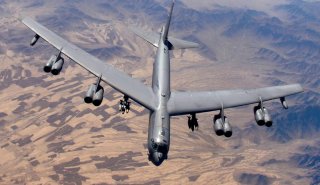 The U.S. Air Force is looking for a special blend of old and new for its future fleet as it looks to both introduce the B-21 Raider over the next few years and continue to upgrade the classic, combat-tested, decades-old B-52 Stratofortress bomber.

“We are going to keep the B-52 for a while, and the B-21 gives you stand-in stealth,” Gen. Kenneth Wilsback, Commander, Pacific Air Forces, told The Mitchell Institute for Aerospace Studies in a video interview.

The B-52 airframes, interestingly, despite emerging as far back as the 1960s, are still viable and able to function effectively in combat, due to some maintenance and sustainment efforts. Added to this, today’s B-52 bomber has been massively overhauled to the point wherein it is almost an entirely different airplane than it was years ago, as either has gotten or will soon get new engines, internal weapons bays, electronic warfare systems, intelligence and networking technologies and sensors.

The B-52 bomber’s engine replacement, for example, massively decreases the need for air-to-air refueling by virtue of integrating new, more fuel-efficient engines. The aircraft has also been receiving new low-frequency radio replacements for newer, stronger, better-hardened communications networks. New communications enable B-52 crews with the ability to receive crucial new intelligence information in flight instead of merely attacking predetermined targets. In the event that new targets emerge or intelligence data changes during the course of a flight, modern radio systems can bring data to bomber crews. The B-52 bomber has also been receiving new radar technology and, as Wilsback explained it, greatly enhanced electronics, including electronic warfare systems.

The upgrade relies upon a digital interface and a rotary launcher to increase the weapons payload. The first part of the internal weapons bay upgrade added an ability to fire a laser-guided JDAM, and subsequent upgrades have been working on adding the Joint Air-to-Surface Standoff Missile, or JASSM, JASSM Extended Range and the Miniature Air Launched Decoy. A MALD-J “jammer” variant, which will also be integrated into the B-52 bomber, can be used to jam enemy radar technologies as well.

More firepower for the B-52 bomber by arming it with new generations of advanced weapons, to even include nuclear-armed cruise missiles, will vastly increase mission scope and help the aircraft attack targets from safer standoff ranges.

“We will fly the B-52 beyond 2040. Despite being our oldest bomber, it has the most life remaining,” Gen. Mark E. Weatherington, Commander, Eighth Air Force, and Commander, Joint-Global Strike Operations Center, told The Mitchell Institute for Aerospace Studies in a video interview earlier this year.