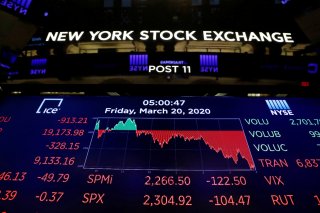 There is near unanimity among economists that the response to the coronavirus-induced recession must be aggressive. As stated by the subtitle of a new e-book on how to respond to the COVID-19 recession: “Act Fast and Do Whatever It Takes.”

Immediate implementation of a universal basic income combined with a job guarantee would help address our current economic problems and the public health crisis. The policy combination could also help us deal with climate change, which is both an ecological and economic crisis.

For now, the government of Canada has chosen to rely on expanding existing programs such as Employment Insurance and the Canada Child Benefit. But these programs have pre-existing shortcomings, as noted by Sheila Block, senior economist with the Canadian Centre for Policy Alternatives.

Not all workers in the so-called gig economy qualify for EI. And many of these workers have lost all of the gigs that kept them financially afloat.

A universal basic income could provide financially precarious people with the money they need. And it would keep money flowing through the financial system.

The 2008 global financial crisis showed what happens when the money stops flowing. Deeply interconnected financial institutions seize up and threaten to collapse.

It took massive intervention by the United States Federal Reserve to prevent a cascade of bank failures. The Fed’s actions saved the financial institutions that created the problem but did nothing for the people losing houses and jobs. A basic income plan can be part of rectifying that mistake.

Calls for a universal basic income are coming from diverse quarters. Ken Boessenkool, a Conservative activist, demands it in both Maclean’s and the Globe and Mail, although he stipulated it’s “a bad idea” in “normal times.”

Petitions demanding a basic income are circulating on social media.

The call by some conservatives for a basic income isn’t actually surprising.

Some advocates argue that it’s pro-free market policy because it prioritizes individual choice. That’s why prominent free marketeer Milton Friedman advocated a negative income tax, which is a form of universal income.

Some basic income critics argue, however, that it would justify eliminating public institutions in favour of corporations. For example, opponents of government spending could target publicly funded education as no longer necessary because individuals can use their basic income to choose among private options.

U.S. Congresswoman Alexandria Ocasio-Cortez tweeted her concern that a non-emergency basic income could harm vulnerable populations by eliminating other important government programs. Ocasio-Cortez added her advocacy for job guarantees, which she promotes as part of a Green New Deal.

A job guarantee is not a new idea. A right to employment was part of U.S. President Franklin D. Roosevelt’s economic bill of rights. The Democratic Party included full employment in its 1980 presidential platform.

In the decade since the global financial crisis, the unemployment rate in both Canada and the U.S. has steadily decreased. Until the current COVID-19-induced recession, unemployment was at a historical low. And yet, forecasted runaway inflation did not occur.

For decades before the financial crisis, the government did not intervene to increase employment. Relying on the advice of economists, they unnecessarily condemned millions of people to the misery of unemployment.n

With low unemployment and stable inflation, advocates of full employment have spurred public interest in a job guarantee. Levy Institute researcher Pavlina Tcherneva is a particularly prominent proponent. It’s also a key component of the Modern Monetary Theory that’s earned a lot of attention in debates about funding a Green New Deal.

The precautions taken to “flatten the curve” of COVID-19 have pushed millions of people out of work. Yet there is an untold number of tasks that need to be accomplished to keep society functioning.

What if we hired artists to make posters extolling the virtues of hand-washing? Or photographers to produce glamour shots of our heroic grocers? What if we hired laid-off flight attendants to help manage crowds at COVID-19 testing centres? Or hired laid-off autoworkers to deliver groceries to the quarantined?

A universal basic income ensures that no one feels forced into work. But most people want to contribute to society in a useful way. A job guarantee ensures that everyone who wants a job has one.

Dealing with the COVID-19 recession requires us to create jobs that the profit-driven private sector will not. The same is true of the climate crisis.

Much of what needs to be done to transition from our current economy to a sustainable economy will not be profitable. That means the private sector will not take it on of its own accord. Government will need to fund the transition and the incredible number of jobs needed to accomplish the task.

David Andolfatto, a vice-president at the U.S. Federal Reserve, described the economic effects of COVID-19 responses as a “planned recession.”

Decision-makers knew actions taken to deal with COVID-19 would produce a recession. Given the planning to cause the recession, it is reasonable to use planning to mitigate its harms. That mitigation will allow us to begin the economic transformation we’ll also need to address the climate crisis.