How To Beat Russia and China in a War: More F-35s and B-21 Stealth Bombers 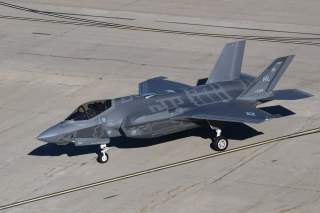 The study also suggested looking into tanker drones, which could move into lower threat zones within a contested environment, providing resources to planes in the fight without putting crews at risk.

The U.S. Air Force has revealed what it thinks it needs to dominate the world’s skies in a potential conflict with Russia or China- and a new study claims the estimates might not be enough to win the day.

In a rare move of underestimation by the notoriously money-hungry Air Force, the Center for Strategic and Budgetary Assessments (CSBA) released a study suggesting the USAF spends more than it should in order to ensure American remains ‘king of the skies.’

CSBA suggested that the USAF not only bolster its current force of fighters and bombers but also invest in stealthy drones, unmanned reconnaissance planes, and futuristic refueling tankers.

According to Defense News, the study called for a large amount of growth. It called for fighter squadrons should increase from 55 to 65, bomber squadrons expand from 9 to 24, and strike/reconnaissance drone units should ballon from 25 to 43 squadrons.

Interestingly enough, the RC-135 reconnaissance plane and RQ-4 Global Hawk surveillance drone units were selected to be cut from 40 to 33 squadrons. In addition, it was suggested that the B-1 Lancer be retired.

Several aircraft tapped for expansion include the B-21 Raider bomber, the F-22 Raptor fighter, and the F-35 Lightning II.

The CSBA did not think kindly of the F-15X and said that while it is a capable “fourth-generation-plus aircraft” the funding it will eat up will take money away from future systems. To alleviate some of the cost, it was suggested that the Super Eagles replace several F-15C/Ds currently growing long in the tooth.

While the venerable A-10 was recognized and selected to serve into the 2030s as planned the CSBA argued against developing a new Close Air Support-only platform to replace it.

“Since nearly all of its future precision-enabled combat aircraft will be capable of providing close air support to friendly forces, the Air Force should not develop a future replacement for the A-10 that would be limited to operations in permissive environments,” the study read.

The study also suggested looking into tanker drones, which could move into lower threat zones within a contested environment, providing resources to planes in the fight without putting crews at risk.