How Biden Can Win the Coming Sino-American Digital Duel 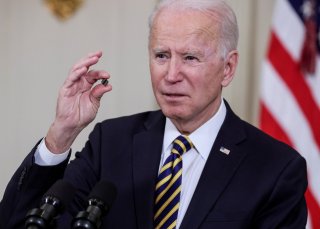 When the former Soviet Union won the space race by sending the first man into space, it was the beginning of the battle that was “going on around the world between freedom and tyranny.” It had to be won because it was “the key to our future on earth,” said President John F. Kennedy in 1961. After his historic “Man on the Moon” speech to Congress, the United States was determined to showcase the nation’s innovative and competitive spirits and did so by landing three American astronauts on the moon. Today, in a new battle between freedom and tyranny, President Joe Biden has unveiled an ambitious science and technology plan by envisioning that “America must maintain its position as the most innovative and productive nation on Earth” to race against another strategic competitor: China.

When the U.S. Senate passed the United States Innovation and Competition Act (USICA) in June 2021, it appropriated an investment of $250 billion for the science and technology sector to better counter “China’s Digital Silk Road” with America’s “Digital Marshall Plan.” President Biden called the USICA a “once in a generation investment in America itself.” The Senate bill still needs to be reviewed and passed by the House of Representatives between now and August 2021. However, the details show significant deficiencies in several vital areas—including cybersecurity, scientific research capabilities, and artificial intelligence. In particular, the bill as currently written allocates $52 billion on the enhancement of U.S. domestic semiconductor capacity.

China, on the other hand, has reportedly committed $1.4 trillion dollars’ worth of investments to develop its domestic semiconductor industry over the next five years. As a response to U.S. sanctions to cripple China’s high-tech and microchip sectors, Beijing’s determination “to achieve self-reliance in semiconductors, which power much of the global economy, is not just a strategic objective but an existential imperative.”

All Microchips Lead to Taiwan

Microchips, or Integrated Circuits (ICs), are critical building blocks of the modern economy and livelihoods everywhere. They are critical not only for the daily use of mobile phones and vehicles but also for utility infrastructure like refrigerators and microwave ovens. Along with the development of the Internet of Things (IoT) or every smart device, all are run by ICs. Most of these microchips are designed by fabless IC design houses—namely semiconductor companies without fabrication facilities—and their production is outsourced to specialized chipmakers and semiconductor foundries.

Over 60 percent of these fabless microchips are manufactured in Taiwan. More importantly, the most complicated microchips are produced by the Taiwan Semiconductor Manufacturing Company (TSMC). The recent White House supply chain security report underscores the fact that the highly concentrated production of microchips in Taiwan is very vulnerable to “geopolitical and economic competition,” especially China’s intensified military activities over the Taiwan Strait. Moreover, the White House report has identified that “the United States also lacks production capability at the most advanced technology levels. For leading-edge logic chips, the US and its allies rely primarily on facilities in Taiwan, which produces 92 percent of such chips. Our reliance on imported chips introduces new vulnerabilities into the critical semiconductor supply chain.”

Most analyses focus on TSMC’s leading role in the chipmaking industry in Taiwan. However, two different perspectives are vitally important to better understand the broader context to the evolving “tech war” unleashed by President Donald Trump.

First, the cause for the current global shortage of IC supply has less to do with the production bottleneck at TSMC, and more to do with the temporal surge of China’s microchips demands. Due to the Sino-U.S. trade war, many Chinese tech companies have switched from their former business strategy of a “Just-in-Time” operational model, which emphasizes zero backlog, to a conventional “Just-in-Case” model, which stockpiles critical components. The sudden increase of Chinese demand for computer chips has created a “Bullwhip Effect” that propagates a virtual interdependence among members of the supply chain influencing the behavior and performance of manufacturers, distributors, and consumers. From downstream, the Bullwhip Effect, which amplifies each upstream supplier’s inventory forecast of microchips along the Information and Communications Technology (ICT) supply chain, has created competition among businesses in securing available production capacities from semiconductor foundries.

Second, microchips for general purposes are often made by IC foundries other than the TSMC’s high-end production capacities. In the semiconductor industry, the general strategy for chipmakers is to make their silicon wafers bigger and use advanced nanotechnology to grow more complicated electronics circuits in each space. Although TSMC is advanced in both aspects of semiconductor manufacturing, only high-end smart devices are needed for such powerful computational abilities. This is why tiny handheld devices are not growing in size but are getting more powerful in each manufacturing cycle. Nikkei Asia in July 2021, for example, reported that both Intel and Apple wanted to be the first customers of TSMC’s latest 3-nanometer production technology.

However, foundries other than those producing high-end microchips are still valuable to the modern economy as these facilities may produce the microchips used in vehicles or electronic gadgets. Hence, U.S. sanctions on the Shanghai-based Semiconductor Manufacturing International Corporation (SMIC) are devastating for China—even though it is not technologically competitive with the West. In addition, given that the IoT devices require the deployment of less powerful ICs, industry research already suggested that China’s leading high-tech communication conglomerate Huawei is investing substantially in this area to circumvent the U.S. sanctions on exporting technologies that make high-end microchips.

The Case for Partnership

Nevertheless, semiconductor foundries are capital-heavy and technology-intensive; the advancement of an industrial ecosystem takes years of research and development. For example, the building of a new foundry in Arizona is estimated to cost at least $12 billion for TSMC. It also needs a range of immense human talent to advance and operate the facility. Therefore, when countries invest heavily in the semiconductor sector, they need to not only consider the time to market entry, but also consider if there exists business feasibility and technological competitiveness in the marketplace. For instance, before China publicly pledged to make itself self-sufficient in its 14th Five-Year Plan (2021-25), Beijing had invested many years supporting its domestic semiconductors industry. Nonetheless, the Beijing-based Tsinghua Unigroup, the fifth largest smartphone supplier in China, still faced the crisis of immediate restructuring in July 2021 after years of receiving government subsidies. This revealed that developing the semiconductor industry is a delicate endeavor—including factors beyond financial support and technological know-how.

Furthermore, the security of the semiconductor supply chain is not merely about “the actual manufacturing” of microchips—namely, the process of “fabrication” in the industrial lexicon. Creating microchips is a sophisticated collaboration and it involves a range of extensive supporting activities. This includes the silicon material, manufacturing (or fabrication), packaging, testing, and supporting materials (like gas) that are required through the whole supply chain. Given that most of the foundries are located in Japan, Korea, and Taiwan, other democratic partners from South Asia, such as India, could easily be part of the partnership of the industrial-level ecosystem after decades of research and development.

These two observations would justify minimizing the risks of a mercantilist industry approach and propose a partnership that would likely contribute to advancing the success of collective and collaborative efforts. Given that the whole semiconductor supply chain is not about TSMC only, but also about the ecosystem that includes the material, special gases for the production process, actual fabrications, testing, packaging, and equipment sales and maintenance operated by different enterprises in East Asia, the United States must recognize that the supply chain is no longer dependent on a single point. Rather it is about the security of various supplies spanning the whole semiconductor industry.

Racing Alone is Not an Option

The debate over domesticating the entire semiconductor supply chain raises significant challenges. It is scope-extensive, financially challenging, technologically difficult, and resource-intensive. There are also issues like when the Chinese temporal demand for microchips disappears in the future, whether the sudden increase of semiconductor production capacity will still be economically and financially sustainable.

Indeed, President Biden has correctly indicated in his Interim National Security Strategic Guidance that “America is back. Diplomacy is back. Alliances are back.” The past innovation and competitiveness of the United States have always been strengthened by the contributions made of a diverse group of people, who have reached the freedoms of American soil from every corner of the globe. However, unlike winning the space race against the former Soviet Union, the technological competition with China will not easily be won by the United States alone. American policymakers should contemplate deepening semiconductor cooperation with East Asia, especially with countries like Japan, Korea, and Taiwan through the recognition of formal digital framework agreements to reduce barriers to further collaboration.

These American-friendly, democratic countries are leading members of the World Trade Organization and have a strong semiconductor industrial base. By further enhancing U.S. relationships with economic entities in the areas of investments and technological joint ventures, the Biden White House would be able to better build back a stronger and more sustainable economic foundation with these like-minded democratic countries to take on Beijing’s totalitarian challenges.