How Canada's Pharmaceutical Industry Got Canada's Doctors to Promote Its Opioids 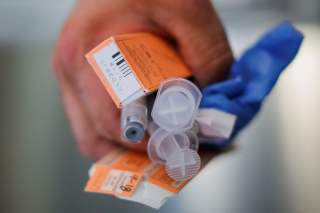 Between January 2016 and June 2019 there were over 13,900 deaths from opioid overdoses in Canada, 4,500 of which occurred in 2018. Based on information to date, 2019 is likely to have a similar mortality rate. Most deaths these days are from street drugs laced with fentanyl, carfentanil and other similar products.

But most experts agree that aggressive marketing of prescription opioids has been one of the major triggers for what we are seeing today. In 2000, OxyContin (long-acting oxycodone), made by Purdue Pharma, was added to Ontario’s drug formulary, a list of all medications covered under the Ontario Drug Benefit program. By 2004, all opioid-related deaths had gone up by 50 per cent and deaths specifically from long-acting oxycodone had increased more than five-fold.

At one point, Purdue was paying 100 doctors per year up to $2,000 per talk to go across Canada and talk about pain management to other physicians. One of those doctors was CBC radio’s Brian Goldman, host of White Coat, Black Art. In his 2010 book, Night Shift, Goldman recounts how he was treated by the companies who paid him:

“… I was put up in five-star hotels and taken to nice restaurants. When I travelled across the continent, I was invariably given a ticket in business class.”

Here in Canada, sales representatives are regulated through the Code of Ethical Practices of Innovative Medicines Canada (IMC), the lobby group representing the major pharmaceutical companies operating in Canada. The code states:

“Members must provide full and factual information on products, without misrepresentation or exaggeration. Statements must be accurate and complete. They should not be misleading, either directly or by implication.”

As researchers of pharmaceutical policy, we were interested in the extent to which these standards are upheld in practice. In 2009-10, we carried out a research project with an international team. In the Canadian side of this study, we asked general practitioners in Vancouver and Montréal who saw sales representatives, to fill out questionnaires after each visit to record what they had been told. In total this study included nearly 1,700 reports by doctors, around half in Canada and the rest in the U.S. and France. Claims about benefits of drugs were made twice as often as statements about harms. Contraindications — information on who should not use a medicine — were mentioned about 15 per cent of the time, and serious harmful effects only five to six per cent of the time.

This study was carried out at the height of opioid prescribing. We therefore went back to see what doctors reported about what sales representatives had said when they were promoting the opioids. There were 69 sales visits with opioid promotions, reported on by 54 doctors. We called this the “nuts and bolts” of opioid promotion as doctors reported on the specific messages sales representatives used to promote prescription opioids.

Even when information on harm was provided, often the aim was to reassure. For example, when one doctor raised the risk of a potentially fatal interaction between an opioid and an antidepressant, the representative answered that “the drug label does not refer to this situation as dangerous and therefore the drug is not contraindicated.”

In nine per cent of promotions, doctors said that the sales representatives had mentioned addiction or abuse. However, the only information doctors reported hearing was claims of a low addiction or abuse potential. For example, statements included: “good drug if [you are] concerned about abuse, cannot get abused” and “safer than codeine and other opiates and non-addictive,” or for “elderly patients not wanting any strong narcotics.”

Despite the inadequate safety information and the lack of warnings about the need for caution reported by the doctors, most said that they were somewhat or very likely to increase prescribing of the drug compared with before the sales visit. In nearly 60 per cent of promotions, doctors judged the quality of scientific information to be good or excellent.

Given the serious harm from overprescribing of opioids, this study highlights the need for doctors to seek out information on medicines from sources that are independent of the pharmaceutical industry, and to avoid relying on sales representatives.

The fox guarding the henhouse

Health Canada has largely turned over regulation of sales representatives’ activities to IMC, which waits for complaints before it acts. Complaints are adjudicated by representatives of member companies. Even if companies are found guilty of violating the Code, the maximum penalty is $100,000, small change for a multinational company.

Relying on the pharmaceutical industry to regulate its own marketing of medicines is a classic case of the fox guarding the henhouse. We know from the experience with opioids that there are serious consequences for public health when doctors rely on misleading information about the benefits and harms of medicines.

If we want to stop the next round of deaths from misleading promotion, Health Canada needs to start actively regulating drug promotion, including imposing meaningful sanctions.