How China Could Become a Naval Superpower: 6 Aircraft Carriers 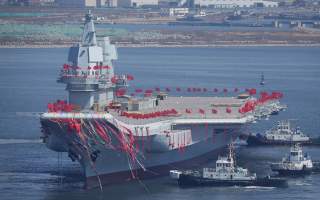 The Chinese navy could possess as many as six aircraft carriers by the mid-2030s, experts told state media.

It's unclear exactly how much a six-carrier fleet would cost China. But it would be a lot.

In 2018, each fleet possessed between 20 and 30 major surface warships, at least a dozen submarines and a handful of amphibious vessels. Just one, the Northern Theater Navy headquartered in Qingdao, operated an aircraft carrier -- Liaoning, China's refurbished, former Ukrainian flattop, which commissioned in 2012.

If China indeed builds six flattops, each fleet in theory could possess two. One always would be available for operations, assuming China follows the same kind of deployment calendar that the U.S. Navy does.

The U.S. fleet plans to deploy six of its 11 carriers within 30 days of a crisis, plus a seventh within 90 days.

Liaoning displaces 55,000 tons of water. Her powerplant is non-nuclear and, for launching planes, she features a ramp rather than American-style catapults. Sister vessel Shandong, China's first domestically-built flattop, began sea trials in 2018.

Which is not to say Liaoning and her sister ship aren't useful. "Though Liaoning has substantially less capability than a U.S. Navy carrier, it provides extended air defense coverage for at-sea task groups and is being used to develop further China’s carrier pilots, deck crews and tactics," the U.S. Defense Department noted in the 2018 edition of its annual report on the Chinese military.

A third Chinese carrier, also non-nuclear, is under construction in Shanghai. That vessel reportedly has catapults. Wang said flattops numbers five and six might also feature nuclear-propulsion, making them roughly equivalent to the U.S. Navy's own Nimitz- and Ford-class flattops, each of which displaces around 100,000 tons.

Song said China's two ramp-equipped carriers would remain close to Chinese shores, while bigger, catapult-equipped vessels sailed farther into the Pacific and Indian Oceans. On her first three training deployments in 2014 and 2017, Liaoning navigated roughly the same path from northern to southern China and back, each time skirting Taiwan.

China's own, smaller flattops surely are somewhat cheaper than that. The Royal Navy's two new carriers Queen Elizabeth and Prince of Wales, which roughly are the same size that the Chinese ships are and also are non-nuclear, cost $5 billion apiece just to build.

China spent around $200 billion on its military in 2018. The United States spent $700 billion. But a dollar goes farther in China, prompting some experts to declare that Washington and Beijing in 2018 actually spent roughly the same amount, adjusting for purchasing power.