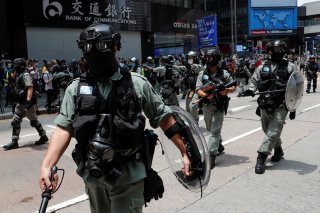 At one of the deliberation days for Occupy Central in 2013 I was reporting on, a socialist told me he would like to see an uprising overthrow the government like in Egypt. Many others present at the Left21 deliberation day criticized the leadership of the Occupy Central movement for being, in their minds, too bourgeois or too risk averse.

The movement pushing for universal suffrage was a diverse one. Deliberation days were organized throughout 2013 with groups of people from different industries, social groups, and geographic areas and housing estates across Hong Kong Island and Kowloon. There was a deliberation day attended by financial industry professionals, as well. As the process moved along, student groups began to take on a disproportionate influence and ultimately took the lead in instigating the occupation.

Now, years after the occupation movement failed to achieve its objectives, Hong Kong has been looking more and more like Egypt during the Arab Spring. Last year was marked by ongoing demonstrations, some of which included looting, arson of shops popular with Mainland tourists, destruction of metro stations, petrol bombs, and arrows fired at police from university buildings.Beijing’s decision to impose a national security law on Hong Kong after passing it through its rubber stamp National People’s Congress will result in an intensification of the unrest and violence. Such is the predictable outcome after years of stepping up pressure on Hong Kong and closing off avenues of non-violent protest.

Occupy Central was viewed by many Hong Kongers as their last chance to take ahold of their voting rights, which were promised in the Basic Law, supposedly in effect since 1997. The Basic Law proclaimed the goal of electing the Chief Executive by universal suffrage following a period of political evolution (which Hong Kong must be said to have achieved). It did maintain that the candidates for Chief Executive should be nominated by committee, but the committee should be “broadly representative.”

The text of Article 45 states:

The Chief Executive of the Hong Kong Special Administrative Region shall be selected by election or through consultations held locally and be appointed by the Central People’s Government.

The method for selecting the Chief Executive shall be specified in the light of the actual situation in the Hong Kong Special Administrative Region and in accordance with the principle of gradual and orderly progress. The ultimate aim is the selection of the Chief Executive by universal suffrage upon nomination by a broadly representative nominating committee in accordance with democratic procedures.

Permanent residents of the Hong Kong Special Administrative Region shall have the right to vote and the right to stand for election in accordance with law.

By the 2000’s, Hong Kong residents were already demanding universal suffrage in the Chief Executive elections and reforms to the LegCo elections. In 2005, the government proposed a package that was widely criticized and shot down by pan-democrats, but five years later the Democratic Party was convinced to support the government’s new proposal. The pan-democrats felt they had been promised a real election in 2017. But with no progress being made and the clock ticking down to 2047, they, and the activists and scholars who devised Occupy Central, opted to ratchet up the pressure on Beijing while they still could.

Hong Kong University law professor Benny Tai, who devised the plan in a January 2013 article, was clear in his judgment that occupying the street was illegal but that he felt it would be a case of justified civil disobedience. Afterwards, he and fellow organizers reported to the police station in peace.

Occupy Central’s failure can be partially blamed on the organizers and activists for allowing de facto leadership to be taken over by student groups with more radical and intractable viewpoints. Joshua Wong became one of the leading figures, representing the purported interests of the democrats in front of the government.

The movement, in its original conception, was supposed to solicit feedback and win broad support from the general public, but some of the activist groups flirted with class struggle and localism. They did not work well with the pan-democratic lawmakers in the LegCo, who would need to be responsible for passing any electoral reform bill. Occupy Central officially adopted a demand for civil nominations—as opposed to the “nomination by a broadly representative nominating committee” mentioned in the Basic Law. If they had focused on trying to change the composition of the nominating committee, they might have gotten further.

The central government, at the same time, was never willing to give much in any case. They never proposed a solution the pan-democrats could have agreed with. While they decried proposals for nominating mechanisms that went outside the parameters of a committee, their proposals did not uphold the requirement that the committee be “broadly representative” of Hong Kong. For the central government, it might have been viewed as positive to have the pan-democrats on the hook for voting down a “fake democracy” proposal, which would have allowed for universal suffrage beyond the controlled nomination stage, while not having to give up anything.

The central government also benefits, in the short term, from having some small but significant amount of the public to become radicalized, engaging in violent behavior during protests, and advocating for independence (as opposed to democracy). Beijing can always point to these radicals in order to smear the broader democracy movement and as an excuse for blocking any concessions or for putting new restrictions on Hong Kong, as they are doing now.

But it’s a myopic view. A majority of the Hong Kong people might not support the radicals today or tomorrow, but the longer it goes on, the more their numbers will increase. Even if the majority remains against them, the unrest will become unmanageable. And, as the 2019 District Council election results attest, a large number of the public was inspired to turn against the establishment; pan-democratic representatives increased from 124-of-the-455 councilors to 388.

Occupy Central, while being against the law, was full of remarkably peaceful and well-behaved protesters most of the way through. In Central, protesters picked up garbage, did homework on the street, and stayed off the protected grass. In the working class area of Mongkok, protests became a bit more rowdy after triads came through and assaulted protesters.

Eventually, as the occupation dragged on with no victory in sight, many Hong Kong residents whose businesses and commutes were disrupted became increasingly upset with the protesters. When the police tore down the barricades in December 2014, the number still occupying had already decreased, and public opinion had soured against them. The protesters themselves were demoralized. The Hong Kong government and central government won the battle, but they did not win the war. The failure aroused the rise of new localist groups who are increasingly unafraid to call openly for independence. The new generation is more likely to pick up a brick than a sign.

This was avoidable. Anyone who observed Hong Kong knew that national security laws are extremely unpopular across a broad spectrum of Hong Kong society. The attempt to pass one in 2003 was the death knell for the Tung Chee-hwa administration. The protests of 2019, stemming from the proposed extradition bill, had mostly wound down by now. It was already possible to punish rioters under existing laws against arson, looting, vandalism, and the like. Beijing has even shown it is capable of conducting its own extraditions in such cases it deems necessary, as the kidnappings of bookstore workers shows.

As far as universal suffrage goes, Beijing and its supportive parties in Hong Kong would have more than a fair shot of winning a contested election. The well-funded Democratic Alliance for the Betterment and Progress of Hong Kong (DAB) is the largest party in the LegCo, and the pan-establishment, as a whole, received a plurality of the vote in 2016, while the democrats split between pan-democrats and localists.

With a nominating committee in place whose composition was representative enough and with a threshold that was fair enough, Beijing could still be assured that no separatist would get through, and Beijing could survive the tenure of a moderate democratic CE if the populace of Hong Kong had not been increasingly turned against Beijing in the first place.

One year after Central was cleared, over Chinese New Year in February 2016, when the authorities arrested a vendor operating an unlicensed food stall, protesters and police squared off. Protesters threw bricks and lit fires, and one officer fired two shots in the air.