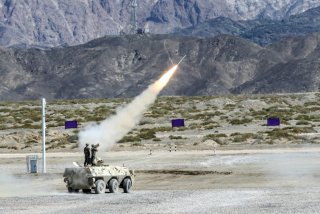 Since November 2020, a complex and tragic civil war has raged in the Tigray region of Ethiopia pitting Tigrayans, led by Ethiopia’s former ruling elite, against Ethiopia’s federal government and the Eritrean military, which has intervened in support of Addis Ababa. Fighting has already killed thousands of combatants and civilians and displaced over 1.7 million people.

Amidst reports of atrocities, indiscriminate airstrikes, regional spillover, and dramatic battlefield reversals, the escalating conflict was marked in its early days by long-distance attacks by advanced missile and artillery systems imported from China. Furthermore, there have been persistent claims of the use of armed drones which remained unverified until this summer.

While such weapons may be at the forefront of the arms race between China, Russia, and the United States, the Tigray conflict illustrates how affordable variants of these weapons are making their way into conflicts involving less wealthy actors too.

The Peace Prize that Led to War

Ethiopia is a multi-national federal republic, with Oromo and Amhara ethnicities accounting for over half of the population. But between 1991 and 2018, Ethiopia was mostly ruled in an authoritarian fashion by ethnic Tigrayans (6 percent of the population) in the TPLF party, who also nursed a deep grudge against Eritrea, which seceded from Ethiopia in 1991.

In 2018, a multi-ethnic coalition finally defeated the TPLF electorally, bringing Prime Minister Abiy Ahmed to power. He proceeded to end hostilities with Eritrea for which he received the Nobel Peace Prize.

This promising development, unfortunately, heralded the war to come, as it infuriated TPLF which Abiy increasingly sought to repress. When Abiy canceled parliamentary elections in September 2020 allegedly due to the coronavirus threat, the TPLF held a regional vote anyway. As Abiy sought to assert control over the defiant region, on November 3 Tigrayans attacked army bases in Tigray, looting many heavy weapon systems.

In response, Abiy deployed the military to crush the rebellion, assisted by aerial bombardments, Amhara militias, and even the Eritrean military. Ethiopian forces captured the Tigrayan capital of Mekelle by the end of November.

But in the following months, mounting atrocities  (massacres, ethnic cleansing, systematic mass rapes) especially by Amharan militias and Eritrean troops and indiscriminate airstrikes caused recruitment and defections to the Tigrayan rebels to surge.

Finally, in a stunning reversal, in June 2021 the TDF counterattacked, recapturing Mekelle and compelling federal troops to withdraw from Tigray. Today a two-front war rages, with the TDF still fighting Eritrean troops to the north while its forces advance southward down the B30 highway towards Gondar in the Amhara region.

Rebel Rockets Over Eritrea and Amhara

Most of the Ethiopian National Defense Force’s (ENDF) heavy weapons are of Soviet/Russian and Ukrainian origin, including T-72 tanks and Su-27 and MiG-23 jet fighters. But recent procurements have been sourced from China, including two types of 300-millimeter heavy multiple rocket launcher systems (MRLSs): the CALT A-200 and Norinco AR2. Both are modeled after the Russian BM-30 Smerch system and mounted on 8x8 by trucks which are supported by an additional reloading crane truck.

MRLSs are capable of laying down extremely lethal and widely dispersed barrages in a short amount of time. Furthermore, larger rockets can strike targets deeper behind the frontline. The 10-rocket A200 has a range of 75 miles, while 12-rocket AR2 (export model of the Chinese military Type 03 system) has a range of 81 miles. The rockets can carry regular high-explosive warheads or highly lethal fuel-air explosives or cluster bomblets, and also come in precision-strike variants guided by Beidou satellite navigation.

The A200 launcher can alternately mount two M20 ballistic missiles from China. An export model of China’s mobile DF-12 SRBM, the M20 officially boasts a range of up to 174 miles. Like Russia’s Iskander missile system, it can deploy countermeasures and maneuvers to avoid interception by air defenses, and a combination of satellite and inertial guidance results in an average accuracy of 30-50 meters of a designated target.

At the start of hostilities in November, Tigrayan forces captured at least two M20/A200 missile launchers and an AR2 MRL, as well as several loading vehicles. One of the AR2s was recaptured late in 2020 by the ENDF and eventually destroyed. An M20/A200 was also allegedly captured in July 2021.

On November 13, 2020, a Tigrayan M20 system launched strikes on airbases in Gondar and the Amharan capital of Bahir Dar further to the south, 180 miles from Mekelle. In the initial volley, a missile damaged the terminal in Gondar, while another narrowly missed the airport in Bahir Dar. Two more strikes were launched in November. Satellite photos show one of the missiles cratered the concrete apron at Bahir Dar airport.

In retaliation for Eritrean intervention in the war, the TDF also struck Eritrea’s capital of Asmara, and the city of Massawa three times in the month of November, with salvoes four and six rockets fired Nov. 27 and 28 respectively. Various accounts suggest the weapons landed on Asmara International airport, military facilities, and surrounding suburbs, but no casualties were reported. Given the shorter distance—around 50 and 75 miles respectively across the border—these may have involved MRLs instead of ballistic missiles.

Addis Ababa has extensively called upon Mi-35 helicopter gunships and around 30 MiG-23 and Su-27 jet fighters to perform airstrikes in the war.  Several air attacks reportedly caused heavy civilian casualties, most infamously on June 23 when a strike on market day in Togoga reportedly killed 64 civilians and injured 184.

TDF forces do possess some air defense systems, however. Confirmed losses attributed to Igla man-portable surface-to-air missiles include a MiG-23 jet with the pilot captured, an L-100-30 cargo plane (you can see the shootdown here), and an Mi-35 helicopter.

Drones therefore would seemingly offer a more affordable and lower-risk form of airpower. Indeed, reports that the ENDF was employing armed drones date from early in the conflict, with TDF leadership alleging that Chinese-built drones operated by the United Arab Emirates are flying missions on behalf of the Ethiopian government, without confirmation.

An EAF general did confirm the EAF is using drones, but not armed drones. Ethiopian Federal Police for example are equipped with unarmed Chinese drones, and the EAF is also known to have acquired Israeli Aerostar Tactical and WanderB surveillance drones.

Given Ethiopia’s relationship with China and the affordability of Chinese combat drones, it was assumed to be the source of such weapons, with some third-party sources claiming the EAF has large CASC CH-4B Rainbow or Wing Loong II (‘Pterodactyl’) armed drones. However visual evidence has remained elusive.

Finally, on August 3, a series of photos posted on pro-government social media showed Prime Minister Abiy walking on a tarmac of Semara airport with a large combat drone (UCAV) in the background with hardpoints under its wings seemingly carrying missiles. Satellite photos on August 2 revealed two drones at the base.

Open-source investigation site Bellingcat determined the drone’s profile appeared to be that of an Iranian Mohajer-6 UCAV. Even more suggestively, photos showing the exterior and interior of the drones’ Ground Control Station and video feed closely match Iranian images of the Mohajer-6’s control system.

The Mohajer-6 is the latest iteration of a drone family that first saw combat use by Iran in the mid-1980s, and can perform surveillance missions using a gimbaled electro-optical sensor and carry out strikes with Qaem-1 precision glide bombs. The Mohajer-6’s utility, however, would be constrained by its reported range of 124 miles, limiting its reach over Tigray. Mekelle, for example, is 155 miles away from Semera.

Nonetheless, the ongoing Tigray war demonstrates how combat drones and long-range missiles and rockets are falling into the hands of more actors across the globe, and seeing more frequent use in conflicts. Drones amount to a more deniable, risk-mitigating, and cost-efficient form of airpower, while rocket and missile artillery offers an alternate means of attacking military and civilian targets far beyond the frontlines.