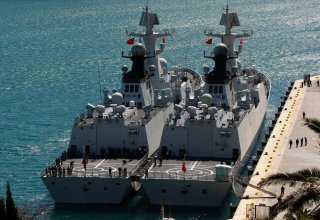 The Chinese Navy is on track to reach nearly 500 ships in less than ten years, should its current pace of expansion continue, a circumstance fortified by a strong domestic shipbuilding infrastructure and multiple new platform programs such as new amphibious assault ships, destroyers, carriers and submarines all under construction.

A newly released Navy, Coast Guard, and Marine Corps strategy document articulates concern about this Chinese expansion with a specific mind to what it cites as concerning Chinese ambitions to expand its global power and influence, control strategic waterways and access points, militarize the South China Sea and ultimately displace the United States as a global Naval leader.

The strategy, “Advantage at Sea: Prevailing with Integrated, All-Domain Naval Power,” explains that China’s Navy battle force has more than tripled in size in only two decades.  The size and scope of the Chinese build-up is naturally of concern for long-term strategic reasons when it comes to global influence and stability. Yet the strategy makes the point that China’s rapid ascent as a Naval power could introduce more pressing near-term tactical military concerns. A large, multi-layered and capable force could, for instance, seek to simply “take over” areas quickly before the U.S. had an opportunity to fashion any kind of response.

“In the event of a conflict, China and Russia will likely attempt to seize territory before the United States and its allies can mount an effective response—leading to a fait accompli,” the strategy writes.

This prospect seems to introduce particular concerns regarding the Pacific, as the strategy indicates that China’s numerically superior force is “largely concentrated in the Western Pacific.” While China’s ambitions are known to be truly global in scale and reach in terms of expansionist aims, the country’s concentrated power in the Pacific compared with a much more dispersed U.S. Naval global operational presence means some kind of “fait accompli” annexation of Taiwan or areas within the South China Sea could be difficult to counter quickly.

The Chinese expansion is intensified and further strengthened by its Coast Guard and Maritime Militia forces which will, together with Naval expansion, expand the Chinese Navy to nearly 800 ships by 2030.

The Chinese are quickly adding a new class of Type 075 amphibious assault ships, as well as carriers and Type 055 destroyers, each platform introducing a new sphere of maritime warfare technologies.

“To support its multilayered fleet, China is also developing the world’s largest missile force, with nuclear capabilities, which is designed to strike U.S. and allied forces in Guam and in the Far East with everything from ballistic missiles to maneuverable cruise and hypersonic missiles,” the strategy writes.

China’s naval expansion has long been on the radar at the Pentagon, yet it is gaining even more traction as an area of concern given China’s aggressive behavior in the region and the reported technological sophistication of its Naval force.