How to Defeat the Taliban’s Resurgence in Afghanistan 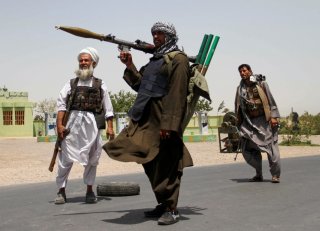 In a companion article published this week by the National Interest, I discussed four tactical, operational, strategic, and political factors that explain the rapid loss of territory to the Taliban in the wake of U.S. military departure from Afghanistan. In this writing, I lay out a four-part plan for the defeat of the Taliban’s resurgence in Afghanistan. This plan requires, above all else, political unity among Afghan leaders for its success.

Following the capturing of over 120 Afghan districts, the Taliban have committed atrocities that constitute serious war crimes, as reported by Human Rights Watch. They have burned to the ground public buildings, schools, and private property; forcibly removed women and children from their homes; demanded families offer their young daughters for forced marriage to Taliban fighters; vandalized houses, and massacred civilians as well as prisoners of war. On July 14, 2021, former President George W. Bush reacted to the Taliban’s advances by calling the U.S. withdrawal a mistake: “Afghan women and girls are going to suffer unspeakable harm. They’re going to be left behind to be slaughtered by these very brutal people, and it breaks my heart.”

To turn the situation around, the Afghan government must adopt—and the United States and other allied nations must support—a plan to defeat the Taliban’s resurgence. If implemented effectively, the following proposal will allow the Afghan National Defense and Security Forces (ANDSF) to develop the capability to take most of the lost territory back from Taliban control within three months. Within six months, the implementation of this plan would reduce the Taliban to a significantly weakened group hiding back in mountain caves. Ultimately, the Taliban must be convinced by force that they cannot win militarily and that they must embrace a negotiated settlement. Eventually, forming a nationally inclusive and participatory government that would include the Taliban would be the final output of this plan and a resulting durable peace as part of its long-term outcome.

The Afghan Air Force (AAF) has been performing very effectively in aerially bombarding and targeting Taliban positions as well as transporting special operators, delivering logistics, and conducting combat search and rescue (CSAR) missions. However, they have too large a geographic area to cover and too little equipment to operate with. At times, soldiers on the ground wait for hours or even days for air support or aerial resupply, and nothing shows up due to high demand from various parts of the country and few air assets. The United States and other allies should increase the quantity of the AAF’s equipment including helicopter gunships; transport aircraft; intelligence, surveillance, and reconnaissance (ISR) drones; and lethal unmanned aerial systems (UAS).

Turkey could deliver some of these desired capabilities. Turkey makes some robust yet cost-effective offensive armed UAS systems that the AAF could desperately use and the Turkish troops that are remaining in the country to provide security for Kabul International Airport could provide training to Afghan drone operators cost-effectively inside Afghanistan. As the United States has withdrawn its own offensive air assets from the country upon which Afghan forces relied, it makes strategic sense to provide more offensive air assets and UAS systems to the AAF. Enhancing the AAF’s capabilities would help change the outcome of the battle on the front lines in favor of the ANDSF. According to the Pentagon, the Special Missions Wing of the AAF is the only ANDSF branch with night-vision, rotary-wing air assault, and fixed-wing ISR capabilities. It’s these assets, albeit in limited quantity, that are giving the ANDSF some level of relief when they hover overhead on the battlefields. And these assets take out Taliban fighters quite effectively. Increased air capability would help ANDSF break the momentum of the Taliban, decrease ANDSF casualties, and push the Taliban back.

The only reason that all of Afghanistan has not already fallen to the Taliban is due in large part to the effectiveness of Afghan Special Forces. This is no exaggeration. Under the Ministries of Defense and Interior, the ANDSF has about 33,000 Special Security Forces (ASSF) personnel under one Special Forces Corps. Together with the AAF, the ASSF is the most capable fighting force in the ANDSF, executing about 90 percent of the offensive combat operations across the country. Given their effectiveness, ASSF numbers must increase by at least 15,000 additional combat personnel to get them close to a 50,000-end strength. Increasing the AAF’s air assets should correspond to an increase in the number of special operators in the ASSF. On July 12, 2021, President Ashraf Ghani announced that he would combine the command structure of the Special Mission Wing of AAF with that of the ASSF. As such, a corresponding increase in the number of ASSF should fit that restructuring perfectly well and help subdue Taliban advances across the country along with help from the national uprising forces.

Raising a 50,000-strong National Uprising Force (NUF) would give a much-needed boost to the ANDSF across the country. In response to Taliban atrocities, thousands of local civilians have risen in what is called an Afghan “national uprising.” Most of the NUF volunteers are anti-Taliban experienced fighters with vast knowledge of Afghan terrain whom the government disarmed and demobilized twenty years ago. In the fight for survival, the government must remobilize them as part of its armed resistance program against the Taliban. Of the 50,000 NUF forces, 30,000 should be used as a “NUF Static Force,” where they will remain in their localities and defend their districts as an auxiliary to and under the command of the ANDSF. The other 20,000 should be mobilized as “NUF Mobile Strike Force” and made readily available for national deployment where the ANDSF is under heavy pressure.

On average, the Taliban launch twenty separate offensives in about twenty different frontlines simultaneously across the country. In each major offensive, the Taliban use between 500-800 suicidal militants against ANDSF positions manned by around 100-200 soldiers. Deploying 20,000 NUF forces to these frontlines would help outnumber and outmatch Taliban fighters by around 500 ANDSF and NUF troops in each major front. This would give a tactical advantage to the ANDSF in terms of numbers and help produce strategic results—successfully defending main cities, provincial centers, border ports, and economic transit routes—and convincing the Taliban that they cannot achieve a military takeover of the country.

The government must act quickly to mobilize the NUF. Relying only on moving ANDSF troops from the south and the east, which are vulnerable areas in their own terms, to hold back Taliban advances in the north and the west will not work. It’s too late for such force realignment. After gaining massive ground in the north and the west, the Taliban are now expected to increase their advances in the south and southeast to surround the Kabul Strategic Area from all sides and lay economic siege around the country. Raising 50,000 NUF troops along with enhancements to the AAF and ASSF would help prevent the Taliban from cutting supply routes and assist ANDSF in taking back territory. To beat a guerilla force like the Taliban, you need an outmatching and determined government-backed guerilla force of your own drawn from local populations to fight the Taliban to the end.

To fashion effective NUF forces, they must go through at least one week of processing and training. They must be registered in the government database, issued properly inventoried weapons and non-camouflaged uniforms, and given a $100 monthly basic pay, which is roughly 60 percent of what a regular ANDSF soldier makes in a month. This way, the government will have management over the NUF and prevent it from turning into warlordism. This method can help the government control the NUF’s deployments and operations, supervise their conduct to ensure they respect human rights and the laws of war, increase employment in the country, and make the NUF a cost-effective auxiliary force in support of the ANDSF defensive and offensive operations—all at a cost of approximately $150 million a year, that the United States and NATO countries should fund. The fund would cost about $60 million a year for basic pay; roughly $50 million for weapons; around $2 million for non-camouflaged uniforms and boots; and approximately $40 million for logistics, food, and ammunition for the first year, totaling approximately $150 million. This small investment, along with other enhancements outlined above, would give the ANDSF the capability to increase its operational tempo, take back territory from the Taliban, and inflict debilitating casualties upon Taliban militants.

For the past three years, the ANDSF has been operating in a defensive posture—essentially lowering its operational tempo against the Taliban to encourage the militants to come to a peace agreement. This strategy has not worked. In fact, this was a highly ill-advised move. It gave the Taliban more breathing room to strengthen its capabilities and to design and launch attacks on the ANDSF without facing an offensive posture from the Afghan security forces. With the addition of 50,000 NUF forces, the ANDSF should adopt a robust offensive strategy designed to take the initiative away from the Taliban. An offensive posture would help keep the pressure on Taliban fighters, degrade their offensive capabilities, demolish their supplies, and disrupt their offensive plans before they materialize.