How Enemy Hypersonic Weapons Will Be Defeated 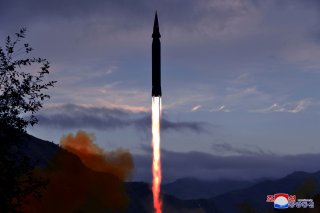 Is the seemingly impossible actually impossible? This kind of paradoxical thinking is behind some of the conceptual and design work related to tracking, stopping, and countering hypersonic missile attacks.

This question continues to drive the Defense Department’s ambitious science and technology programs and advanced research programs, which attempt to achieve the seemingly impossible. Clearly, any salvo of incoming hypersonic weapons would overwhelm defenses. This is part of why the military services are moving quickly to engineer and deploy “offensive” hypersonic weapons. Additionally, some of the military service’s six branches are invested in fast-progressing efforts to integrate “offense and defense” into a combined intercept strategy intended to thwart, derail or simply stop a hypersonic attack.

Additionally, the Defense Department has awarded development deals to Northrop Grumman, Lockheed Martin and Raytheon to advance technology and develop designs tied to the endeavor. Some people have described the Missile Defense Agency deal as an “Other Transaction Authority” that aims to accelerate the concept design required to engineer hypersonic weapons defense.

Aegis ship-based radar and weapons systems have been architected to be extremely agile and upgradeable in terms of development, meaning new software configurations change, adjust, improve and actualize new technological breakthroughs in the realm of defense. Software upgrades, such as those incorporated into what the Missile Defense Agency will accelerate, improve and streamline threat detection, radar return, fire control loop and interceptor-launch processing. These upgrades will likely make improvements to a growing number of Low- and Medium-Earth Orbit Satellites so that they are able to establish a continuous radar track of a weapon moving as quickly as five times the speed of sound. Perhaps at times it can be quickly networked and sent to the ground or ship deck through optical links and other transport layer technologies. This kind of detection is being developed through programs such as Northrop Grumman’s Hypersonic and Ballistic Tracking Space Sensor.

“We are pleased to have these contractors working with us to develop design concepts for the GPI,” said Rear Adm. Tom Druggan, the Missile Defense Agency’s Sea-Based Weapon Systems Program Office. “Multiple awards allow us to execute a