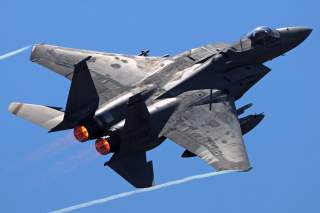 Twenty-six years after McDonnel Douglas — now part of Boeing — delivered the last single-seat F-15C to the Air Force, the flying branch is adding new sensors, communications gear and potentially weapons options that could extend the type’s operational relevance into the 2030s and beyond … as a heavily-armed “flying arsenal” supporting the stealthy F-22.

As recently as 2009, the Air Force had planned to fully replace its then-400 or so air-superiority F-15s with 381 F-22s, but Robert Gates — the defense secretary at the time — opposed spending tens of billions of dollars on high-tech stealth fighters while the military was fighting bloody ground wars in Iraq and Afghanistan.

The Defense Department ended F-22 production at 187 plus prototypes, leaving a shortfall in air-superiority fighters that, realistically, only the F-15 could fill. The Air Force began mulling upgrades to keep the twin-engine Eagles war-ready for decades to come.

Structurally, the F-15s are fine. Boeing projects that the F-15C/Ds, which average more than 30 years old, can safely fly another two decades, at least. “Right now, there is nothing life-limiting on the F-15,” Col. Gerald Swift, the Air Force’s top F-15 maintainer, said in 2011. “It is a very well-designed platform.”

But many of the F-15’s systems are dated, in particular its communications, electronic warfare gear and sensors. Newer Chinese and Russian fighters match or exceed the Eagle’s radar-detection range and tracking ability and new surface-to-air and aerial missiles threaten to outsmart the F-15’s countermeasures.

To remedy these weaknesses, the Air Force is paying Boeing and Raytheon to install new APG-63(v)3 electronically-scanned array radars on most of the surviving Eagles, at a rate of around a dozen per year and a cost of more than $5 million per installation. The flying branch awarded the contract for the next 17 new radars in late October.

And on Oct. 1, the Air Force selected BAE Systems to upgrade F-15s with the new Eagle Passive Active Warning Survivability System, a suite of all-digital radar- and missile-detectors that cues the F-15’s radar jammers, radar-spoofing chaff and flares for distracting infrared-guided missiles.

The new radar and electronic warfare gear could help the F-15 survive in a direct fight with the latest rival fighters. But a separate set of enhancements could prepare the Eagle for an arguably more-important role as an airborne missile truck supporting the F-22. Boeing is developinga pod for the Air Force that helps F-15 and F-22 pilots communicate without breaking radio silence.

The Talon HATE pod, which is still in the prototype stage, essentially “translates” the F-22’s unique radio datalink so that it can pipe information into an F-15’s cockpit — and so an F-15 can send information back. As a bonus, the Talon HATE pod includes a passive infrared sensor, allowing an F-15 to detect targets without turning on its radar and giving itself up. Using the pod, a mixed flight of F-15s and F-22s could work together, both types scanning and communicating discreetly so as to preserve the stealth qualities of the F-22, in particular.

This is important to the Air Force because the F-22, while fast and capable of avoiding detection, is not particularly heavily-armed. In stealth mode, with its weapons packed in internal bays, an F-22 carries just eight air-to-air missiles, four fewer than Russian and Chinese Sukhoi jets can carry in their heaviest configuration.

And considering that there are only around 140 combat-coded F-22s in the American inventory, any U.S. air-dominance force centered on F-22s risks flying into battle with far fewer missiles than its opponents might possess. To tilt that balance of power back toward the Americans, Boeing is proposing a new configuration for upgraded F-15Cs that it calls the “2040C,” a reference to the enhanced Eagle’s possible out-of-service date.

The 2040C, which Boeing unveiled in September, adds conformal fuel tanks as standard and equips the F-15 with new pylons that double the Eagle’s missile loadout from eight to a staggering 16. The idea is that F-22s would lead mixed flights, with the faster stealth fighters with their better passive sensors finding targets for the more heavily-laden F-15s. The F-22s would be smart “spotters.” The F-15s would be dumb “shooters.”

The effect, in theory, would be roughly the same as adding many more missiles to an F-22 without sacrificing the F-22’s stealth.

The Air Force has not committed to the 2040C upgrade, but Boeing is bullish that the flying branch will want to add the enhancements when the Eagles start cycling through the depot for deep maintenance and EPAWSS installation in the 2020s. “Doubling the number of missiles on the jet is not something that’s a current program of record,” Boeing vice president of F-15 programs Mike Gibbons said, “but it is something we know is of interest to the Air Force.”