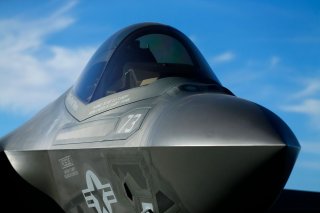 While most major Pentagon production and weapons development programs have experienced some kind of coronavirus impact, many programs have by and large sustained activity and not slipped schedules for extended amounts of time. There has, however, been some delays and impact to the construction of some major platforms, such as the F-35. In addition, there has been some difficulty for smaller suppliers and subcontractors more vulnerable to delays.

It is within this context that Lockheed is pushing to minimize delays with its massive F-35 production machine in Fort Worth, Texas. The process, which draws upon extensive production lines and engineering stations, has felt the effects. Lockheed tells The National Interest they will wind up building 18-to-24 fewer aircraft due to supplier impacts of COVID 19, but emphasize they are surging forward with successful construction and deliveries regardless. They still point to their initial pre-virus goal of delivering 141 F-35s this year. Also, the firm says it has been “adjusting some work schedules, maintaining specialized employee skills sets and accelerating payments to small suppliers,” according to Lockheed spokesman John Losinger. Losinger said Lockheed has accelerated $307 million to 1,900 supply chain partners.

It makes sense that there would be some kind of supplier impact given the elaborate construction and engineering process required to build the stealth fighters. Last year, I had the interesting experience of visiting Lockheed’s mile-long F-35 production complex in Fort Worth, Texas.

Here is some of what I saw:

Filled with stacks of fuselage panels, engine components and a wide assortment of pipes, electronics and avionics, the sprawling F-35 construction facility in Ft. Worth, Texas, resembles a small city filled with engineers, mechanics, electricians and airplanes at various stages of construction.

While some stations include vertically-hanging airplane wings, rudders, pipes and intricate collections of wires running through the fuselage, others contain little more than an assortment of seemingly disconnected small parts. Farther along the mile-long construction strip, heavily trafficked by workers, builders and engineers, there are bays with nearly completed F-35 with a light-green exterior. These “about to be finished” F-35s, roll into a separate environmentally-controlled hanger where they await a final coat of blended gray paint—giving the aircraft its color.

After watching a certain amount of varying airplane structures and configurations, to include pipes, computer parts and larger components such as wings, tails, rudders, engines or a mounted 25mm cannon—an observer can begin to discern the differences between the variants. The F-35C is the largest, built with a larger wingspan and tail for carrier landings; the F-35A includes a visible fuselage/wing-mounted 25mm cannon buried beneath a stealthy, rounded exterior blending the weapon into the body of the plane; the F-35B is, developers say, the most expensive and technically complicated of the group.

This horsepower, when combined with the LiftFan, generates the downward thrust necessary to enable the “hover” ability and vertical landing. An F-35B has what looks like a square door or opening on top of the fuselage behind the pilot and above the lift fan to maximize downward air flow. Engineers explain that the massive thrust, sufficient to propel the aircraft up to speeds beyond the sound barrier, results from a four fold process. Air ducts on either side of the nose “suck” in air to the engine, the air is then compressed before being ignited with gas—generating what looks like a controlled explosion of fire coming out of the back. The force generated through this process, enables the speed, maneuverability and acceleration of the aircraft.

Mechanical information provided by F-35B engine maker Rolls Royce states “To achieve STOVL, the lift fan component of the LiftSystem operates perpendicular to the flow of air over the aircraft.” The LiftFan can operate in crosswinds up to 288mph, Rolls Royce data explains.