How France Is Becoming a Quantum Computing Power 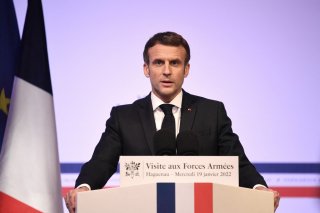 A year ago French president Emmanuel Macron announced plans to provide a framework for his nation's industrial and research forces to make the country a key player in the development of quantum technology. The "Quantum Plan" included an investment of €1.8 billion ($2 billion) over five years—a significant increase that placed France third after the United States and China.

The sector has already experienced significant growth, with patent filings doubling between 2018 and 2020, according to data and analytics company GlobalData. It is believed that the technology could potentially revolutionize areas of defense such as artificial intelligence (AI), enabling autonomous vehicles and improved targeting for precision weapons systems.

Quantum computers are not just improved computers. Rather the machines—once fully developed—could utilize the properties of quantum physics to store data and perform computations. Theoretically, a single quantum computer could complete in seconds tasks that would take classical computers thousands or even millions of years.

The first nation to achieve quantum computing could have a significant advantage, especially as the technology could render current encryption obsolete.

According to a new report from GlobalData, "Quantum Technologies in Defense," this is why many countries are concerned about falling behind in the quantum race due to the potential for the technology to revolutionize communications. Communication is a critical area for the defense sector, with quantum key distribution (QKD) having the potential to completely prevent adversaries from accessing secure communications.

Per the report: "As the existing quantum workforce is extremely small, with only a limited number of people having the capability to design and build quantum computers, countries are pushing to develop an industrial and skills base that will enable them to utilize quantum technologies."

Part of France's spending will initially be to create a platform that will allow traditional computers to access quantum processing power. "Quantum computers are expensive and extremely complex to build, so a remote platform is critical for providing the defense industry with access to quantum tools," explained William Davies, associate defense analyst at GlobalData, in an email.

"The technology is an important investment for the future of the French defense industry, and is a good move for the country to keep up with its peers," Davies continued. "Allies such as the U.S. and the UK are also investing, as well as adversaries such as China, largely to benefit their own defense interests. Further, IQM, a European quantum computer company, is opening an office in Paris in 2022 as a direct response to France increasing investment in quantum. This business investment will provide opportunities for France to expand its domestic quantum base and increase the amount of trained personnel in the sector."

Along with hypersonic weapons, stealth technology, and high-energy weapons, quantum computing could be a significant game changer. Clearly France intends not to be left behind.