How Georgia and Azerbaijan Can Help NATO and the Middle East 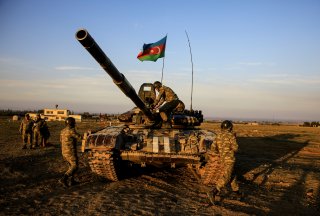 With political will and thinking outside the box, the United States could turn the tables on Iran and Russia in the Greater Middle East. To do this, the United States needs to repair its relationship with Turkey, strengthen its alliance with Israel, and recognize new allies.

Turkey is a long-time NATO member and has its second-largest army. Earlier this year, Israel was moved from U.S. European Command (Eucom) to U.S. Central Command (Centcom) which has been described as “a kind of Middle Eastern NATO.” After being absent for over a decade under Presidents Barack Obama and Donald Trump, the United States should upgrade its relationship with the South Caucasus by providing Major Non-NATO Allies status to pro-Western Georgia and Azerbaijan.

Under Presidents Bill Clinton and George W. Bush, the United States supported the GUAM Organization for Democracy and Economic Development group of pro-Western states in Eurasia. Besides Georgia and Azerbaijan, GUAM includes Ukraine and Moldova. Turkey has established a military relationship with Ukraine with whom it is jointly producing drones (unmanned aerial vehicles-UAV’s) and fighter aircraft. Turkey, which has a large Crimean Tatar population, supports Ukrainian President Volodymyr Zelensky’s Crimean Platform initiative to shed international attention on Russia’s occupation on Crimea.

Together, Turkey, Israel, Georgia, and Azerbaijan would enhance regional security, counter Russian and Iranian influence in the Greater Middle East, and strengthen U.S. power projection into an important and unstable region of the world.

Since 1991, Georgia and Azerbaijan have pursued pro-Western foreign policies and refused to join Kremlin-led integration projects in Eurasia. Georgia has never hidden its intention of joining NATO and has pursued military reforms to that effect. As an energy superpower, Azerbaijan has spent $24 billion during the last decade on building powerful armed forces, six times more than that spent by Armenia—whose population is far smaller and whose economy is not energy rich.

Azerbaijan’s longest security relationship has been with Israel—not Turkey—although it is the latter which is commonly believed to be Baku’s main ally. In the decade up to 2019, two thirds of Azerbaijan’s military equipment was imported from Israel. Israeli weapons, particularly drones and air defense systems significantly contributed to Azerbaijan’s military victory in the forty-four-day Second Karabakh War in the fall of last year.

Azerbaijan has not only built a twenty-first-century army, but it has also been trained to NATO standards by Turkey. Thirteen joint training exercises were held between Turkey and Azerbaijan in 2019 alone, the year before the forty-four-day war. NATO training and successful military experience have transformed Azerbaijan’s armed forces into an army with NATO-level standards.

Azerbaijan’s military success in the forty-four-day war was a product of Israeli military technology, successful Turkish military strategy accumulated in Syria and Libya, and “significant levels of advice from Turkey.” Turkey successful used drone warfare in Syria, where it pulverized Bashar al-Assad’s security forces, and Libya, where it halted an attempt to capture Tripoli by Field Marshal Khalifa Belqasim Haftar’s forces from the eastern region of the country. Can Kasapoglu, a researcher based at Istanbul’s Edam think tank said, “Turkey has transferred not only weaponry but also concepts of operations.”

Azerbaijan and Georgia have both long-standing records of cooperation with NATO. Azerbaijan, for example, has participated in NATO-led peacekeeping operations since 1999 in Kosovo (KFOR) and Afghanistan (ISAF, RSM). Both countries participate in NATO’s IPAP (Individual Participation Action Plan) and PfP PRP (Partnership for Peace Planning and Review Process).

NATO+ in the Greater Middle East

Azerbaijan plays a major role in regional energy networks, supplanting Russia as a gas player. The Baku-Tbilisi-Ceyhan (BTC) pipeline delivers Azerbaijani gas to Turkey and Georgia. Forty percent of Israel’s oil meanwhile is supplied by Azerbaijan with military equipment going in the other direction.

Azerbaijan’s close security ties to Israel long pre-dated President Trump policies of encouraging rapprochement between Islamic states and Israel. During his presidency, the UAE, Bahrain, Sudan, and Morocco agreed to open diplomatic relations with Israel. Other countries are likely to follow.

A successful projection of U.S. and NATO power into the greater Middle East requires Turkey and Israel to mend their relations. Azerbaijan, which has excellent relations with both countries and used both of their military technologies to win last year’s Second Karabakh War, has acted as an intermediary between Turkey and Israel. Baku has offered to host a summit of Turkey and Israel to discuss energy, military, and regional security questions.

The United States has granted Morocco and Bahrain, who have recently established diplomatic relations with Israel, Major Non-NATO Ally status. The United States should recognize the potential contribution to enhancing regional security of Azerbaijan and Georgia, which would grant them access to greater security cooperation and military assistance. Israel, Egypt, Jordan, Tunisia, and Kuwait already have this status.

The Biden administration should not miss this available opportunity to expand its allies in the Greater Middle East and thereby create a strong network of pro-Western states to counter Iran and Russia’s malign influence in the region.

Taras Kuzio is a professor in political science based at the National University of Kyiv Mohyla Academy and Non-Resident Fellow, Foreign Policy Institute, Johns Hopkins University. Routledge is to publish his book Russian Nationalism and the Russian-Ukrainian War.