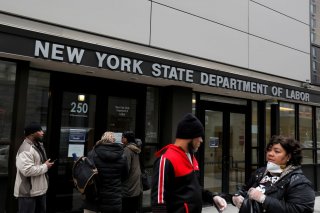 My brother Khary is a 40-year old former mechanic who has earned his living as an Uber driver in New York City for the past four years. He’s one of the millions of full-time American gig workers acutely experiencing the insecurity washing over all of us as the new coronavirus spreads and the economy reels.

I live a few hours away in Ithaca, New York, where I research how the safety net works and sometimes fails to work. Now, I’m suddenly working exclusively from home while also partnering with my husband to homeschool our kids, who are 7 and 10 years old.

Two weeks ago, when the the severity of the new coronavirus was becoming apparent, I invited Khary to hunker down here with his wife and their youngest son. He declined, reluctant to lose his only source of income.

Previously, my brother found freedom, flexibility and some fun through his ride-sharing gig. But the onset of COVID-19 is forcing him to make dire decisions.

“It seems like it’s a choice between money and your life” he told me once New York’s busy streets became eerily calm. After days of wavering, he decided to stop taking passengers, saying “I’m just going to choose my health.”

I’m relieved, and not just for him. My brother is a devoted husband and helps care for our 72-year-old mother, who requires dialysis three days a week and has advanced dementia. Together with my father and sister-in-law, my brother tends to our immunocompromised mom’s every need on a daily basis. He helps her eat, drink, take her drugs and so much more.

His decision to stop driving for Uber will help safeguard my extended family’s health. Still, I worry about what doing the right thing means for everyone’s financial fate. Though his three children are grown, he’s still helping all of them pay their bills, including his youngest son who was employed in an Amazon warehouse where workers recently tested positive for COVID-19.

In ordinary times, ride-share drivers fall through gaping holes in the safety net. They make too much money to qualify for many government benefits but also can’t count on their employers to fill the gap.

The pandemic is altering this landscape. From unemployment benefits to medical care, the government is expanding the usually flimsy social safety net enough that it may even catch those it normally excludes.

The new US$2.2 trillion stimulus package promises relief. Pending passage in the House of Representatives, gig workers like my brother will soon be eligible for unemployment benefits. Still, precisely how much they will qualify for and how quickly they will get those benefits remains unclear.

Working to make life more convenient for others

The government estimates that around 15 million people in the United States have some kind of alternative employment arrangements for their main job. That includes independent contracting, temp agency work, on-call work and freelancing. All told, these various forms of gig work range from dog walking to housecleaning to caring for the elderly.

Gig workers provide on-demand services that make modern life more convenient for lots of people. But many of them are also on the front lines of the coronavirus pandemic.

With some exceptions, such as food delivery services, I believe they are going to be among the hardest-hit from the mounting economic fallout.

Because these workers are not technically employees of the companies dispatching them, they don’t qualify for paid days off, sick time, medical insurance, retirement benefits or other resources that workers often get from employers.

They are also relatively powerless. They have trouble joining and forming unions and often get sidelined when decisions that affect them directly are being made.

In a major departure from the norm, Uber recently announced a meager sick leave benefit that pays drivers for 14 days if they fall ill with COVID-19 or must be quarantined. This likely will not come close to providing for drivers’ basic needs, especially at a time when millions of Americans are contending with a new deadly disease.

In desperation, some Uber and Lyft drivers who either can’t get work or have decided to stop driving due to social distancing have taken to GoFundMe to plea for financial help from friends, neighbors and sympathetic strangers.

Some nonprofits have set up relief programs for workers whose livelihoods are threatened by the outbreak.

But corporations, big-hearted strangers and charities can’t deliver all the help people like my brother will need to make due in these tough times. As the government steps in to assist, both emerging and existing policies may finally fill some of the holes in the safety net that have made life harder for gig workers.

The safety net is a patchwork of policies meant to catch Americans who find themselves in financial freefall. Though flawed and inadequate, it is vital during economic downturns and other disasters. Three of its largest pillars are food, housing and health care.

In 2019, the Supplemental Nutrition Assistance Program helped about 35 million low-income families to keep food on the table. But until coronavirus struck, many gig workers weren’t been eligible for SNAP benefits. With gig workers swiftly losing income and changes to the program underway more will qualify. For example, healthy adults without dependents previously faced a limit of three months of assistance within three years. The government has suspended that restriction.

Gig workers are more likely than other Americans to live in urban areas where housing costs are high. Though public housing and rental voucher programs are in short supply, there is reprieve in sight for gig workers struggling to keep their homes during the losses sustained by the coronavirus. The federal government is halting foreclosures and making it possible for homeowners to delay mortgage payments for up to a year for loans backed by the Federal Housing Administration, Fannie Mae and Freddie Mac. Texas, South Carolina, Maryland, Minnesota and many other states have issued moratoriums on evictions. Cities from New Orleans to Philadelphia to San Jose have also delayed evictions for anywhere between 30 and 90 days.

Like many gig workers, my brother has been uninsured for years. He makes too much as a ride-share driver to qualify for Medicaid but hasn’t been able to afford getting insured through New York state’s Affordable Care Act exchange. If he can’t work for a long time, he might become eligible for Medicaid, the nation’s primary program for insuring low-income Americans. That eligibility varies widely depending on where you live, but many states are exploring and implementing ways to cover more people.

To be sure, there are other programs that help people who are facing economic hardship, lending a hand with paying for phone service, water and electricity. Some of these may also be changing in the days to come.

People who want to know which options are available for them can use the government’s online benefit finder, which generates a list of federal and state government benefits for which they are eligible.