How the Glock 43 Gun Is Superior for Concealed Carry 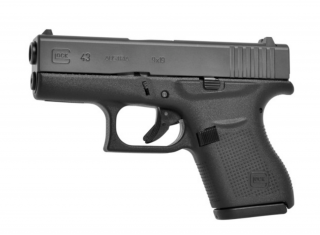 Key Point: Could this be the ultimate self-defense gun?

Both the Glock 26 and the Glock 43 are very popular small pistols, especially among those who like to carry their handgun concealed. On paper, the differences between these guns appear to be very slight, but in the real world even these slight differences can have a big impact.

The debate as to which of these pistols is better has raged for as long as they’ve both been available. The Glock 26, released in 1994, revolutionized the market for concealed carry pistols. Until that date, the go-to choice for back-up weapons for security personnel had been 5-round snubnose revolvers. The fact that the Glock 26, quickly dubbed the “Baby Glock”, offered a 10-round magazine as standard, whilst also being very easy to conceal and carry, meant that within just a few years it had become very popular among both professionals and civilians alike.

The Glock 43, released in March 2015, took the concept one step further. It managed to pack all the firepower of the 26 into an even smaller package. While the release of this ultra-concealable pistol was undoubtedly a response to the increasing popularity of concealed carry over recent years, getting reasonable performance out of such a small gun took a significant amount of research and development. Luckily, Glock had built up an enviable amount of expertise in making small pistols by this time, and the 43 was very well received.

So which should you go for?

Well, notwithstanding the standard warnings that no one review can ever recommend a gun for everyone, there are some differences between these two guns that make each more suitable for particular shooters. Today, I’ll take you through the key points of difference, so that you can make your own mind up about the best gun for you.

On paper, the differences between the two guns actually appears to be pretty minimal: 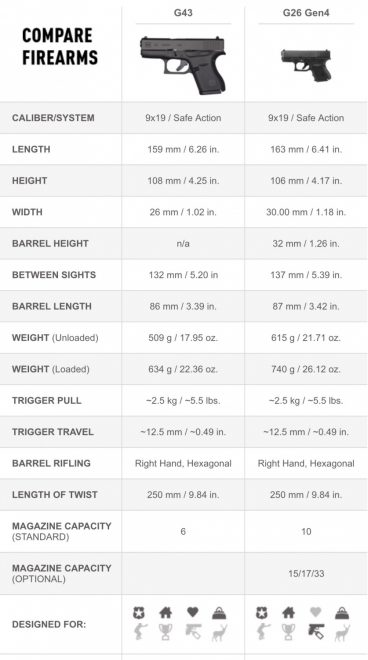 As you can see, the differences in terms of size between the two guns are pretty minimal. By far the largest area in which the two weapons are differentiated is in weight, and ammunition capacity. The 43 is about 17% lighter than the 26, but this comes at the cost of having only 6 rounds, rather than the 10 of the 26, as standard.

In fact, if you take a look at any of the endless forums discussing the merits of the two guns, this trade-off between weight and ammunition capacity is by far the most commonly raised point. In most other respects, the guns are pretty similar.

Unfortunately, it’s quite hard for me to make a definite recommendation as to which gun to get based on this difference, because what you are looking for in a concealed handgun will depend on how you are using it, and what you think will be most useful in a dangerous situation.

That said, here are my thoughts. If you are planning on carrying a concealed pistol around all day, a 17% weight saving can make all the difference. This is especially true if you live in a hot part of the country, where light clothes are the norm, because the slightly smaller size of the 43 can make the difference between your pistol printing or not. On the other hand, you might want a few more rounds than the 6-round magazine offered as standard on the 43. Whether you do or not depends, I guess, on your own perception of the risks you face.

To my mind, it is possible to get the best of both worlds by going for the smaller 43, and carrying an extra magazine. When the shooting starts, you’ve got 6 rounds as an initial volley. You can then find some cover, and snap on an after-market 12 round magazine. This also has the advantage of making the grip of the 43 into a full-sized pistol grip, which will then improve your accuracy and ability to handle your weapon.

The other major factor to consider when choosing between the 26 and the 43 is the price of each weapon. At a first glance, it appears that the 26 is the cheaper gun – it’s been around for longer, and there are many second-hand weapons on the market.

However, if you are buying a gun for self-defense purposes, I would never recommend getting a used gun. I know that there are many reputable dealers out there, and that second-hand guns can in some cases be just as good as new weapons. To my mind, though, if you are relying on a gun to save your life you need to make sure it is in the best condition possible, and this means getting a new gun.

New, there is not much to choose between the guns in terms of price. These are not budget firearms, of course – they are made by Glock – but again, if you are using a pistol for self-defense, it makes sense to get a quality weapon.

BUT WHICH IS BETTER?

Well, the gun that is right for you will depend on your own needs. However, in order to help you we took both weapons down to the range for testing. Here are our thoughts on how they performed.

Both the Glock 26 and the 43 handle very well, especially for such small guns. Glock continue to impress in this area – their experience with making compact pistols like this really show through in the way both guns feel.

In truth, there is very little to choose between the two weapons in terms of handling. The 43 is a little bit smaller, and this might annoy some people, but in reality both are small guns anyway, so if you find the 43 small you’re going to find the 26 too small also!

Bear in mind, also, that adding an aftermarket magazine to either weapon will completely change the way it handles. With such compact guns, the weight and size of a larger magazine, plus the rounds inside, can make a big difference.

The usual warnings come into play when measuring the accuracy of these guns – your ability to shoot straight with any weapon is much more dependant on your own skill, and on practice with a particular weapon, than on the gun itself.

That said, with a bit of practice both of these guns are more than accurate enough for self-defense weapons. The short barrels mean that you are not going to be able to take 400-yard sniper shots, of course, but for close-quarter combat both guns are ideal. If you miss with either, you only have yourself to blame.

Accuracy is, of course, also dependent on the other factors we’re considering here. If you find the smaller Glock 43 just a little bit too compact to handle comfortably, this is going to affect your accuracy when you use it (on the flipside, this makes it incredibly comfortable to holster inside your waistband).

Well, that to say? If you are used to shooting larger pistols, the recoil on both of these weapons is likely to surprise you. Since both are compact, they lack the weight necessary to soak up recoil, and both jump around a fair amount when firing.

In addition, both of these guns are so small that your choice of ammunition can actually be felt when firing. Using powerful rounds in these guns makes them kick quite a lot, and if you are an inexperienced shooter this can make them difficult to handle.

Choosing between these guns in terms of recoil is difficult. In truth, I think there is no difference. Some people I talked to for this review said that they thought the 43 had less recoil. However, I think this might be due to the slightly longer grip on the 43 giving the impression of less kick. With a longer grip, it can be easier to control the recoil, but I don’t think there is any less.

Both of these guns are Glocks, and most of you will know what that means when it comes to reliability. Both guns feel very solidly built, and I’m pretty confident that both will give you years of reliable service. I have friends who have been reliably shooting their Glock 26 for years, and I see no reason why the 43 shouldn’t boast the same longevity.

In our tests, both weapons performed very well. Even using the super cheap ammunition that some of us like to get from yard sales, neither gun jammed. This is quite an achievement for such tiny weapons, and I have no hesitation in recommending either as a reliable self-defense weapon. You can rely on either gun to fire at the critical moment.

And so again, in terms of reliability there is really not much difference between these two pistols. Let’s call this category a draw.

This is where the differences between the two guns really come into play. Let’s state the facts first – the Glock 26 holds 10 rounds as standard, and the Glock 43 just 6. There is therefore a real, measurable difference in this area.