How Good Is the Army's Anti-Tank "Titan" Robot 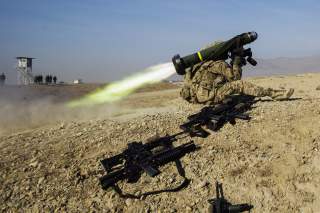 Key point: The military already has different types of robots and the deadly Javelin missile. So they figured, why not combine the two?

The test represented a big step for the U.S. military as it moves to acquire armed robots for high-end warfare.

It does have tracks, the better to traverse rough terrain and boggy ground, but it weighs just about one ton and was originally designed to haul supplies for foot troops. The missile launcher is fired by remote control — by a human, not an algorithm (although there’s targeting tech in development that has the potential to change that).

But after one shot, the robot can’t reload itself, so a human has to manhandle a new missile onto the launcher — for now. So this robot is no rival to the 70-ton M-1 tank and its 120-millimeter smoothbore gun, whose high-velocity shells no existing active protection system can stop.

But a robot tank isn’t what the Army is looking for, Freedberg explained. “Instead, it’s looking at robotic combat vehicles that could be much smaller, cheaper and more expendable than its manned vehicles — five 10, or 20 tons, officials say– allowing them to play very different tactical roles.”

The missile-firing Titan could help the Army better understand UGVs as it plans for a bigger experiment combining human soldiers and armed robots.

Soldiers riding in a specially-modified M-2 Bradley infantry fighting vehicle will control a platoon of ground robots during an exercise in Colorado in 2020.