How Good Is It? Kel Tec's KSG Shotgun Claims to Offer "the World's Fastest Reload" 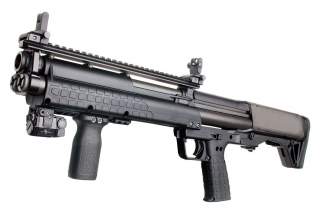 Kel-Tec’s KSG was said to be one of the most innovative shotguns to hit the market when it came out in 2011. Designed to feed from parallel magazine tubes under the barrel in a bullpup layout, the KSG packs double the capacity of standard full-length shotguns and nearly triple or quadruple the capacity of shotguns of its same length.

But the KSG was not the first shotgun to use this layout. The earlier South African Neostead 2000 designed by Tony Neophytou arguably did a better take on the same concept, with a barrel placed under the magazine tubes and an innovative pump-forwards action. But neither shotgun has seen widespread success with military or law enforcement users. Is there really merit to the concept of a dual-tube bullpup shotgun?

One of the primary selling points of the KSG is the dual magazine tubes. Kel-Tec says that this can be used to perform what they call “the world’s fastest reload” by switching tubes, or to utilize two different kinds of projectiles. While the two different types of projectiles can make sense if slugs are loaded in one tube and buckshot in another for tactical usage, that’s an incredibly niche use case. Some publications suggest that non-lethal and lethal ammo could be mixed in the same gun, but this is an incredibly bad idea, and most police departments restrict nonlethal ammo to specially painted and marked guns for good reason.

The “world’s fastest reload” is kind of a silly point as well, when both of the KSG’s competitors, the UTAS-15 and Neostead 2000 have the capability to feed alternating from both magazine tubes, preventing the need to even reload at all.

The safety of the KSG is also questionable without a vertical grip. Due to how close the pump of the shotgun is to the barrel, if one’s hand slips off the grip after pushing it forward, it could very easily end up in front of the barrel. Most shooters place a vertical foregrip on their KSGs for this reason, but it increases the bulk of the gun. The Neostead 2000 utilizes a pump forward action for that reason, as on the chambering “stroke” of the pump, the hand and pump are going rearward, so any slippage will be in a safe direction.

However, despite its flaws, the KSG has seen limited use by military forces around the world. The South Korean 707th SMB has been seen using the KSG during operations. Why they adopted it instead of the Neostead is probably down to availability and aftermarket support. The Neostead was a relative commercial failure due to the market it was launched in and the additional cost to export. It also had limited provisions for the addition of sights and other types of customization.

But the KSG comes with Picatinny rails all over the gun for easy mounting of sights and other accessories.

However, in military use, autoloading shotguns are far more common. Oddly enough, Kel-Tec takes a swipe at autoloading shotguns on their marketing materials for the KSG, stating “For well over a hundred years, pump-action shotguns have stood the test of time because of their proven reliability. Eliminating variables such as gas systems is particularly important when dealing with the vast variety of shotgun loads on the market. Pump-action puts the reliability in the hands of the user.”

For a tactical shotgun, this makes little to no sense. Most professional users use one or two shotgun loads, allowing militaries or police forces to pick a shotgun that works with the loads they use. Putting reliability back in the hands of the user is also a questionable proposition.

But even then, the role of shotguns has largely been delegated to that of a device to breach doors in Western militaries. For this, the most compact gun possible is desired, with little attention paid to capacity. The KSG is pointless in that role.

While the KSG is a compact and high capacity design, there’s little to no point to it for serious users. Regular, autoloading shotguns fulfill most roles better, and the dual mag tubes have little practical use.