How Have Prisons Dealt With Pandemics? 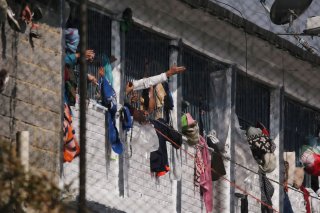 “As the COVID-19 pandemic wreaks havoc across the world, the alarm has been sounded in prisons too”, the Commonwealth Human Rights Initiative reported early in April. It wasn’t wrong. Jails are high-risk environments for disease, where pathogens are easily transmitted.

Prisoners are particularly vulnerable – the new coronavirus spreads rapidly in conditions of overcrowding, and many prisons have limited healthcare and poor levels of hygiene. Enhanced cleanliness regimes and the early release of inmates are now being considered by governments all over the world.

Such conditions were also highlighted in the late 18th century by prison reformer John Howard. His life was largely devoted to visiting prisons throughout Europe, castigating them for their chaotic governance and unhygienic conditions.

Howard’s State of the Prisons in England and Wales (1777) reported “a melancholy chronicle of damp, dark, dank, airless cells, famished prisoners, negligent authorities, apathy, corruption, disease and death”. Prisons were blighted by diseases associated with filth and overcrowding, including “gaol fever” – or typhus – that, according to Howard, destroyed more prisoners than were put to death in all the public executions in the kingdom.

Prisons were easy targets as deadly outbreaks of cholera spread across the globe in five major pandemic waves during the 19th century. Appearing to originate in India, the second pandemic of Asiatic cholera reached England in 1832 and we know from contemporary statistics that it took hold in many prisons, spreading rapidly and resulting in high mortality among prisoners already in poor states of health.

Wakefield House of Correction in Yorkshire suffered badly. It reported its first case when prisoner James Petty became ill on June 24 1832 and died the following day. Cholera raged in the prison in two successive outbreaks in 1832-3, accounting for 78 of the 158 cases in the town in the first wave alone – 21 of whom, including the prison governor, died. The overcrowded prison quickly released 75 prisoners committed for “trivial” offences.

It was only in 1854 that John Snow established that cholera was a waterborne disease, but well before this, in 1833, the water supply for Wakefield prison, which had been described as “highly loaded with animalculae and vegetable matters” was replaced, the prison diet enhanced and the building lime washed and fumigated with chlorine. Despite these measures, the disease again took hold late in that year, concentrated among prisoners committed for vagrancy who slept in one large cell. One-third of the prisoners were admitted to the prison infirmary, and a quarter of the cholera cases died.

As understandings of the causes of disease improved during the 19th century, sanitary reforms were implemented and new boards of health began collecting statistics on mortality and morbidity, including epidemic disease. Reforms also involved a vigorous programme of prison construction across Britain and its empire. Wakefield itself was rebuilt in 1847 with more than 700 separate cells, in keeping with modern prison design.

New statistics from colonial jails showed that in the 18 months following its establishment in 1858, one-third of the convicts sent to the Andaman Islands penal colony died of dysentery and diarrhoea. In Lower Bengal (India), tens of thousands of prisoners died from disease between 1843 and 1867. British and Irish prisoners in Bermuda succumbed to yellow fever in a series of outbreaks during the first half of the 19th century. Those in the Gibraltar hulks were far more susceptible than soldiers and civilians to the cholera epidemic of 1865. In most colonial locations, including Mauritius during the cholera epidemics of 1819-20 and 1867, prisoners were employed in street cleaning, transporting the dead and nursing.

As in Wakefield, the lack of social distancing in colonial jails provided an ideal environment for the communication of disease. Water supplies were often contaminated and conditions overcrowded. In Welikada and Slave Island prisons in Ceylon during the cholera epidemic of 1873-5, officials also worried about the spread of disease from prisons to the free population. As in Wakefield 40 years earlier, some low-risk prisoners, including debtors, were released – which had also happened in Barbados.

While the dangers of prisons and imprisonment during epidemic outbreaks became the subject of medical, administrative and public discourse, contemporary accounts by prisoners are rare. Among these, however, are letters written in Belfast prison in late October during the second wave of the 1918 influenza pandemic.

When “the flu” hit, the prison held 150 Irish nationalists. More than 100 fell ill. Ironically, this cohort may have been vulnerable because, as political prisoners, they had the privilege of association, both on their wing and at exercise. Their letters, usually to relatives, reveal much about the experience of all prisoners. They were frightened by the disease and, especially, the disease in prison. As Michael Stapleton wrote:

As far as possible we all should guard against panic; for that in itself leaves us liable to fall a victim. We should remain calm, cool, and confident. Although we have seen, and have helped to remove, some of our comrades on stretchers.

Jim Crowley, meanwhile, asked his mother if she could “imagine delirium while being locked up in cells for 13 hours in the dark”.

Even when prisoners were not in the middle of an outbreak the disease haunted their lives during 1918 and 1919, filling them with concern for their families outside.

While hygiene and medical care has improved in many prisons worldwide, there are many resonances between official responses to COVID-19 and the historical management of epidemics in prison, in large part because many prisons remain so overcrowded. The current crisis also reminds us of just how vulnerable the institutionalised populations we create become when epidemic disease takes hold.