How Hitler's Invasion Of Poland, Not Russia, Killed Nazi Germany 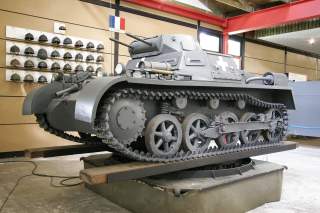 Editor’s note: This is the second in a series of five articles providing critical analysis as to how Germany Might Have Won World War Two.

In our last article, we examined some of the actions that Germany might have taken to achieve its territorial objectives without having to fight the Western Powers of Britain, France and the United States of America in World War Two. Some of the most important ways for Germany to have won the war would have been to have waited until German industries had recovered from the limitations imposed by the Versailles Treaty to maximize Germany’s military potential. It would have entailed a more prudent utilization of Germany’s limited military-industrial resources, better organization and increased mobility of her army. Here are some examples:

Due to the fact that the German rearmament program was not projected to be completed until 1943, Hitler expected the outbreak of war would not occur until then or until 1941 at the earliest. Accordingly, Hitler was completely caught off guard when Britain and France declared war against him on September 3, 1939 over his invasion of Poland. Germany’s generals warned Hitler that the army was not ready for war in 1939. Not only were one-third of Germany’s army divisions still seriously underequipped, but there was a major shortage of officers due to the massive expansion of the German Army from seven to 103 divisions during a five year period.  Due to the serious shortage of tanks armed with 37mm guns or above, the German Army was forced to employ 2,000 obsolete Panzer I and Panzer II training tanks which the Germans had never intended to use in war. While the punitive Treaty of Versailles did not end up accomplishing its purpose in keeping Germany economically destitute, militarily powerless, divided and downtrodden, let alone prevent a Second World War, its ban on Germany building tanks actually contribute toward Nazi Germany losing World War Two.

Without the Treaty of Versailles’ restrictions, German industries would not have had so many difficulties producing thousands of Panzer III and Panzer IV medium tanks (which began production way back in 1936) until 1942/1943, forcing the Germans to use inferior model tanks. By contrast, the T-34 was first produced in 1940; by 1941, over 3,000 production models were being built. Had the German Panzer III and IV tanks comprised the whole of the German tank fleet—instead of a small percentage of it—at the beginning of Germany’s invasion of Russia, it might very well have made the difference and helped German forces capture Moscow in 1941. This likely would have prompted Stalin to offer Germany even more generous peace terms than he did in actual history.

Furthermore, thanks in large part to the disarmament provisions of the Treaty of Versailles, Germany had a dearth of militarily-convertible industries which prevented them from mass producing the hundreds of thousands of trucks needed to motorize their army. Whereas the U.S. and British armies in Europe were fully motorized and the Red Army was nearly so—thanks to the 450,000 trucks provided by the United States and United Kingdom via Lend-Lease shipments—the German army was forced to move by horse carriage, foot and rail right up until the end of the war because they lacked motorized transport.

It is one of history’s greatest ironies that the nation that pioneered and most excelled at mobile Blitzkrieg warfare had the least-mobile army of all the great powers during the war. It is certainly impressive that the Germans achieved so many victories with so many quantitative disadvantages in terms of heavy weapons, supplies and transports in comparison with their enemies. One can only wonder what the German army might have achieved had it possessed a similar number of tanks and trucks as the American or the Soviet armies. Certainly, the outcome of the war would likely have been much different had Hitler waited until 1943 (as he had originally planned) when the German rearmament program was completed and the country had acquired sufficient fuel oil resources.

Begin mass production of armaments in 1939 instead of 1943

Hitler delayed starting Germany’s mass production of armaments because he anticipated a series of rapid victories against both the Western Allies and the Soviet Union ending the war by December 1941. He also feared a resulting disruption of the German economy as German leaders had done in World War One, largely resulting in the subsequent postwar German economic collapse. After his anticipated victory, the historical record reveals that he planned to reduce German armaments production in order to focus on economic, industrial and architectural pursuits such as his planned redesign of Berlin into the “world capital” of Germania.

However, if Hitler had started mass production of heavy armaments four years earlier, then by 1941 his factories might have been producing one thousand Panzer III and Panzer IV medium tanks a month. Ideally, these tanks would have been armed with long barrel 50mm and 75mm cannons. If so, by May 1941 he would have had ten thousand high-velocity gun-armed light and medium tanks (and, if at all possible, ten thousand half-tracks), which might have enabled the Germans to field over three times more tanks than the German Army was able to deploy on the Eastern Front during the entire war. Then the German Army might have succeeded in capturing Moscow in 1941 and may never have lost their hard-won quantitative superiority in tanks on the Eastern Front (which they briefly achieved following in the first two to three months following their invasion of the Soviet Union).

In his book Inside the Third Reich, which he wrote after the war, German Armaments Minister Albert Speer criticized Hitler’s decision to build 45-ton MAN-designed Panther tanks instead of Build Daimler-Benz Panthers weighing 35 tons. Furthermore, the German 57-ton Tiger tanks were much more expensive and difficult to produce than their 25-ton Panzer IVh medium tanks which weighed less than half as much (or their 45-ton Panther tanks for that matter). The effort to produce them likely prevented the Germans from building several thousand more medium tanks, which like the well-designed T-34 family of tanks produced by the Soviets, could have been mass-produced much more quickly and efficiently. The Germans should have also employed mass production techniques such as welded turrets to produce tanks as fast as the Allies did since maximizing medium tank production was the key to defeating the USSR.

In addition, German construction of heavy, rather than medium, tanks made even less sense given the desperate shortages of gasoline necessary to fuel the German war machine later in the war. For this reason, the German war effort would likely have been far better served had they averted construction of heavy Panther and Tiger tanks altogether and focused all tank production on 25-ton Panzer IVh tanks and StuG III tank destroyers to maximize their number of operational tanks during the latter half of the war.

During World War Two, Germany ended up wasting its finite military-industrial resources building under-armed Scharnhorst-class battlecruisers, giant under-armed Admiral Hipper-class heavy cruisers, over 1,156 U boats and thousands of V-1 and V-2 rockets of dubious conventional military utility. Not only did these weapons squander limited German steel and industrial resources, but they expended millions of tons of fuel oil which was desperately needed for the German Army and Air Force. Instead of building over a thousand U-boats as they did in actual history, Germany should have abandoned its unrestricted submarine warfare campaign. For just as Germany did in World War I, unrestricted submarine warfare ended up yielding far more negative than positive results, specifically in that it caused other nations to declare war against Germany after their merchant ships were sunk. Doing so would have freed up limited German military-industrial resources to enable them to focus on building more fighters to obtain air superiority over the British and Soviets, giving them a better chance of both winning the Battle of Britain and capturing Moscow in 1941 or 1942.

In addition, building a fleet of seven aircraft carriers instead of four battleships and three Admiral Hipper-class heavy cruisers, would have been a far better use of limited German arms production resources, which would have given the German Navy a chance to potentially defeat the Royal Navy in successive battles and perhaps even obtain naval superiority, ending the British starvation blockade against Germany and her allies. The Germans could have started building this aircraft carrier fleet after 1935 the Anglo-German armaments agreement was signed so that by 1941 they would have had all seven completed.

Immediately prior to the German invasion of Russia, Hitler decided to cut the number of tanks per division in half from 300 to 150 in order to double the number of Germany’s Panzer divisions on paper while diluting their actual strength, mobility and fighting power. This was a major mistake. Instead, Hitler should have refocused Germany’s military-industrial resources to attempt to make the German Army as motorized as possible. British and American forces operating in the European theater were fully-motorized, meaning they were all transported by wheeled vehicles. But the German Army, ironically given the fact that its early war victories from 1939–1941 were due to their successful use of Blitzkrieg tactics, remained mostly foot and horse-bound right up until Germany’s unconditional surrender to the Allies on May 7-8, 1945.