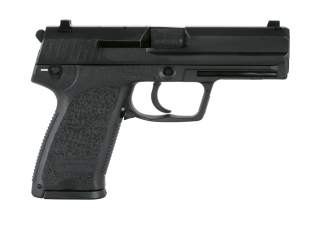 Key point: The HK USP is strikingly similar to the very popular 1911. This is why they've had such niche commercial success.

In the 1990s, U.S. Special Operations Command went looking for a new pistol. The new handgun would arm commandos from the U.S. Army, Navy and Air Force, giving them a next generation handgun with the latest technology. One outgrowth of that program was the Heckler and Koch Universal Service Pistol, a handgun available today in the U.S. domestic firearms market. Although nearly thirty years old, the USP’s feature set still makes it competitive alongside the latest pistols.

In 1991, U.S. SOCOM—the parent command for several Army, Navy, and Air Force special operations units—issued a requirement for a new handgun. SOCOM wanted a hard-hitting pistol that combined a high ammunition capacity, a variety of aiming devices, luminous sights and ambidextrous manual safety. The Offensive Handgun Weapon System (OHWS) was also to be capable of firing high-pressure +P rounds that dramatically increased muzzle velocity and energy. The contract was for up to 8,000 pistols, plus accessories, a relative rarity at a time the rest of the U.S. military was engaged in a post-Cold War drawdown.

Heckler and Koch’s submission for the OHWS was based on the company’s new Universal Service Pistol. The USP was developed in the late 1980s as a response to the wave of European “Wonder Nine” high capacity pistols flooding the American firearms market. So prevalent was the wave that even the U.S. Army adopted a foreign handgun, the M9. The USP was initially aimed at the law enforcement and commercial markets. Police and sheriff departments across the U.S. were rapidly adopting the new .40 Smith & Wesson round, so the USP was initially chambered in the new midrange round. The company later released 9 millimeter and .45 ACP versions.

The USP is 7.68 inches long with a height of 5.31 inches. It is 1.26 inches wide, making it relatively narrow among high capacity autoloaders, with even the .45 ACP version the same width. Barrel length is 4.25 inches, the same as a Colt Commander-type handgun. The .40 Smith & Wesson version could carry up to 13 rounds in a magazine, the .45 ACP version 12 rounds, and the 9-millimeter version 15 rounds.

The USP does things differently than other handguns. Rather than use the modified Browning linkless system used in the 1911 pistol, Browning Hi-Power and dozens of other 20th century guns, the USP uses a shorter recoil system with the barrel coming from a locked position in the slide. The pistol uses a polymer side stiffened with stainless steel inserts, paired with a steel slide. The barrel uses Heckler and Koch’s proprietary polygonal bore profile, which the company claims increases velocity, barrel life and makes the barrel easier to clean.

Another difference from existing handguns: magazine release lever placement. Unlike many handguns, the USP’s magazine release is a butterfly lever at the base of the trigger guard. This allows a single lever to be accessible by right or left-handed shooters. Another innovation is an oversized trigger guard that won’t cramp shooters wearing duty gloves.

Interestingly, the USP shares some features with an American classic, the 1911A1. Both pistols have large slide stops, a similar grip geometry, and a frame-mounted safety located underneath the rear sights. (The USP’s safety also doubles as a decocking lever.) The USP features Novak-style sights, as well as a rail under the barrel for attaching lights and laser aiming devices.

SOCOM eventually purchased 7,500 Heckler and Koch guns under the name Mark 23, with deliveries taking place between 1996 and 1997. It is unknown if any are still in use today. The USP, however, is still on the civilian market, where it has carved out a niche among Heckler and Koch enthusiasts. A mixture of new and familiar features, it could credibly function as a “bridge” gun between notoriously conservative 1911 owners and the new breed of polymer/steel handguns.