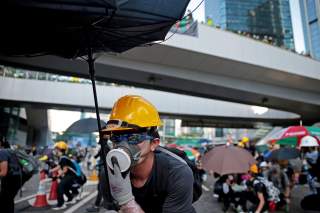 The protests in Hong Kong started over CEO Carrie Lam’s extradition bill and have turned into a defining issue for the trajectory of China as a state and a society, and for the Chinese state’s relationships internationally.

What Carrie Lam does is important, but what President Xi Jinping orders to be done is definitive.

The protests are not, as Chinese state media likes to say, about ‘escalating violence by radicals’. Some 2 million out of Hong Kong’s 7.5 million people have taken part in the demonstrations—which makes this a mass expression of views, not the efforts of a ‘tiny number of radicals’.

Footage over the past two months has shown the world that the protesters come from all walks of life and all age groups. Professionals like air-traffic controllers, civil servants, construction workers, lawyers and finance workers have joined in strikes or other protest action, disrupting essential services. Their bravery in doing so should shame all of us who mutter about Xi’s state ‘punishing us’ by holding up wine shipments. John Howard’s recent comments about our fundamental democratic values, the effects of authoritarianism and the resilience of the human spirit on display in Hong Kong remind of us of what’s really at stake here.

The violence has been perpetrated by a mix of police action, dubious thugs and exasperated protesters. For the scale of the mass movement, though, the protests have been remarkably peaceful. That might change as Hong Kong authorities fail to engage with what is driving the protests and treat them as simply a public order problem and a challenge to their own and Beijing’s authority.

The protesters certainly want more from Lam than her condemning the protests and painting them as violent radicals. They want her to withdraw the extradition bill she has suspended and they want an independent public inquiry into police actions. They’ve also called for Lam’s resignation, an end to labelling the protests ‘riots’, and universal suffrage to elect the legislative council.

Most of all, though, what’s got millions of Hong Kong residents onto the streets and disrupting services is Beijing’s and Lam’s moving away from ‘one China, two systems’ towards Hong Kong being assimilated into authoritarian China’s one-party political and legal system. So it’s ironic to hear Chinese state media talking about the protests as endangering the ‘one China’ framework.

The protesters’ fundamental call is about preserving Hong Kong’s rule of law and expanding the people’s voices in how they are governed. They want more difference in the two systems, while Beijing wants to fast-track convergence.

What must be causing sleepless nights in Beijing’s Zhongnanhai compound is what to do from here. It’s not really about Hong Kong now, but about the future of the Chinese Communist Party’s rule of the multi-ethnic empire that makes up today’s China, and about the kind of relationship Xi’s state can have with other nations.

Handled badly, Hong Kong will ripple through China, further widening the unhealed wounds from Tiananmen and showing the repressive will and brutality of the CCP and its security organs. It will make clear to any doubtful Taiwanese that unification means assimilation and doesn’t mean Taiwan’s democracy becoming one of two systems. And it will make it even harder for advocates of uncritical, deepening engagement with China under Xi to look themselves in the mirror and be credible in public.

You can sense the anxiety about internal stability and unity in China’s latest national defence white paper. It’s like hearing someone desperately telling themselves things are fine when they know they are not: ‘China continues to enjoy political stability, ethnic unity and social stability.’ That’s why China’s expenditure on internal security forces is higher even than its expenditure on the People’s Liberation Army.

In this Beijing echo chamber, problems don’t flow from the CCP’s authoritarian rule, but instead come from surprising, isolated outbreaks of ‘separatist forces’, with ‘external separatist forces’ responsible for unrest in Tibet and ‘East Turkistan’. This pretence appears to be fooling no one but the party, those without a source of news other than Chinese state media, and the wilfully blind advocates of getting hold of as much of China’s wealth as they can. It’s certainly not fooling Chinese citizens in Xinjiang, Tibet or Hong Kong about the reality of Xi’s China Dream.

But Xi and his colleagues on the CCP’s central committee and the Central Military Commission, including defence minister General Wei Fenghe, don’t have many good options given the actions they and Lam have taken to date. Had it been delivered early in the protests, a gesture of withdrawing the extradition bill could have taken momentum out of what is now a mass movement.

Done now, concessions from Hong Kong’s authorities—like withdrawing the bill and announcing a public inquiry into the use of violence by police—might split off some of the protesters and so slow momentum. It would fit with the way the CCP tries elsewhere in China to use local actions to spot and neuter dissent before it grows.

Lam’s resignation might sound like an appropriate response; however, the immediate obvious problem is what happens next. Any candidate Beijing might produce to replace her would almost certainly bring protesters back out onto the streets. A popular public Hong Kong candidate would be unacceptable to Beijing. Lam will probably stay on as a shock absorber for dissent.

Voices like Wei’s won’t help. His remarkable dose of truthfulness at June’s Shangri-La Dialogue, when he said the Tiananmen Square massacre of unarmed Chinese youths and other citizens by the military at the party leadership’s direction was ‘correct policy’, shows adherence to the CCP and ‘Xi Jinping Thought’.

The temptation to intervene has to be there, just as proved to be the case in June 1989. Well-publicised footage of PLA units stationed in Hong Kong training to do urban operations is partly about sending a message. Beijing could order in the PLA and say the incident was ‘political turbulence’ and the central government took measures to stop it. They could also order in the aptly named People’s Armed Police. That would fit with the party’s line about subversion, separatist forces and external forces fomenting unrest.

Can Xi manage Hong Kong so that it doesn’t become a petri dish example of the limits of his rule? To do so, he’ll need to shift strategy and provide some outlets for the mass public sentiments expressed by the people of Hong Kong. His instincts are probably to keep a tough line and wait things out, but Hong Kongers seem to be gaining energy from this approach, not losing it, and the stakes for Xi are increasing as this happens.

If Xi sends in the PLA or People’s Armed Police, it will be a crystallising moment for all people, governments, companies and universities engaging with the Chinese state and economy.

In 1989, a similar use of force by Xi’s predecessor led Australia’s Bob Hawke to grant asylum to 20,000 Chinese students and families living in Australia. Just as it did then, the Chinese state’s use of lethal force against its own people will split the international community.

There will be states and individuals who will downplay even the most egregious violence—talking airily and in abstract terms about the importance of ‘stability’. There will be voices saying we should separate trade from foreign and defence policy and turn a blind eye to actions against our deepest values and our interests. But Xi’s China Dream of win–win peaceful development and resolution of disputes will be an artefact of propaganda that can be stored with back copies of ‘Xi Jinping Thought’.

Xi will have demonstrated that the PLA remains the party’s armed wing, to be used against his people and any other enemies of the party. Trade deals and investments will have a bald new context. The term ‘trade war’ will be exposed for the overblown label it is in light of real violence. Xi will be at war with his own people and the question for the rest of us will be, ‘Whose side are you on?’

This article by Michael Shoebridge was originally published on ASPI's The Strategist.