This Is How I Ended Up in Conversion Therapy 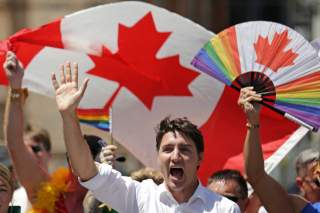 The Trudeau government introduced legislation this week to amend the Criminal Code to ban conversion therapy, a controversial practice that aims to change the sexual orientation, gender identity or expression of LGBTQ+ people.

The move marks the first concrete step towards the fulfilment of a Liberal election promise. A federal ban of conversion therapy is important but we are still negotiating the social conditions that permitted such harmful practices in the first place.

I should know. I am a survivor of conversion therapy and I know first-hand how harmful it is. At 16, I decided to self-enrol in conversion therapy out of a desire to be “straight” and act in more masculine ways. My formative years were filled with invalidating experiences and heteronormative pressures that led me to the point of thinking that being queer was something that was incompatible with living in our society, forcing me to want to consider changing, or worse, take my own life.

I’m telling my story because I believe no other youth should go through what I, and so many others, have experienced.

Conversion therapy should be criminalized

I am now a health researcher and an advocate of LGBTQ+ equity working on a project at Simon Fraser University led by social epidemiologist Travis Salway. The study hopes to understand experiences of survivors and to recommend healing methods.

While I am using the official term, conversion therapy, there are actually many ways — both formal and informal — that people use to try to get LGBTQ+ people to “go straight.” This is broadly known as SOGIECE (sexual orientation and gender identity and expression change efforts).

Conversion therapy has been proven to be ineffective and harmful. It is so harmful, it should be criminalized. Despite advanced queer and trans rights, LGBTQ+ people continue to face explicit and covert aggressions that are invalidating and that stop us from embracing our identities.

A federal ban on conversion therapy will not eradicate the social conditions that allowed such harmful practices — conditions that value straight, cis and binary ways of being through heterosexism and cissexism.

The legal framework of Canada — like other western nations — is under-girded by Christian religious doctrines that condemn and pathologize sexual and gender diversity.

Social contexts have also set the stage for change efforts to exist both formally and informally. Even though conversion therapy will now be banned, it will likely continue in more covert ways, whether it’s religious leaders condemning people, educators invalidating identities or children being told to be more this way and less that way in their homes.

LGBTQ+ people have come a long way, but homo- and trans-phobia are embedded within many aspects of our lives where everyday interactions let us know we are different. I never saw myself reflected in the TV shows or movies I watched. The educational material I was given assumed heterosexuality and I was told being gay was sinful by peers and religious leaders. I often heard queer people compared to criminals. I was made to think there was something seriously wrong with me.

Evidence supports that this discrimination occurs in our communities and at home. Queer and trans people experience significantly higher stress levels due to hostile social environments (minority stress), leading to disproportionate rates of mental illness.

Further, and related to this, 40 per cent of homeless youth are queer or trans.

Survivors and allies can get involved

As one way to engage with the debate, I encourage survivors to write to their local members of Parliament or ministers of the legislative assembly to share how provincial and municipal protections are also needed to protect against the covert ways that change efforts operate in your community. Also, tell them what you need in order to heal from the trauma you’ve experienced.

To the broader community, begin to recognize practices in your circles that delegitimize or erase queer and trans identities.

A ban is only a start to repairing the damage that has been done and continues to occur. We need to acknowledge the poor social supports for queer and trans people, the limited positive representation, and the social and health inequities they face.

When I was 16, the social pressures to be straight and masculine were too profound for me to navigate or fight back. I was conditioned by my family, friends and community to think my only option was to change, or take my life. I had no access to safe spaces for queer youth, inclusive health education, representation in any aspect of suburban life or exposure to queer values. This social milieu established conversion therapy as a viable or even necessary option to me.

So far, four provinces — Nova Scotia, P.E.I., Manitoba and Ontario — have adopted measures to bar the practice from their health-care systems. At least three major cities — Vancouver, Calgary and Edmonton — have also blocked the therapy. In the United States, 20 states have banned the harmful practice.

Conversion therapy, in all its forms, threatens our health and human rights. The addition of conversion therapy to the criminal code is a good first step but must come with education efforts to change the structures and social attitudes that underlie such practices. The contexts I grew up in still persist.