How Interwar Treaties Changed the Course of USS Wyoming’s Career 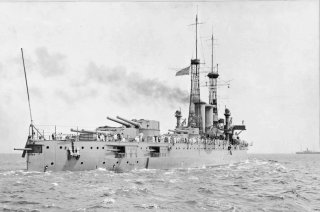 The United States Navy authorized the construction of a new class of dreadnought battleships prior to the outbreak of World War I. The new Wyoming-class’ armament featured more powerful twelve-inch (305mm)/50 caliber Mark 7 guns than those on the preceding Florida class. The Wyoming class also included an additional sixth twin-gun turret as well as improved armor protection. This new battleship class was the last design to use twelve-inch guns, but was also the first to utilize a torpedo bulkhead on an American battleship.

The Wyoming class was also the first U.S. battleship design to mount twelve heavy guns. It featured two forward main gun turrets and an impressive four aft. Two of the battleships were eventually completed: USS Wyoming (BB-32) and USS Arkansas (BB-33). The two ships, which were 554 feet (169 meters) long at the waterline and 562 feet (171 meters) overall, were both completed in 1912 and often served together. In April 1914, USS Arkansas took part in the occupation of Veracruz during the Mexican Revolution, during which two of her crew earned the Medal of Honor for their actions during the initial occupation of the city. USS Wyoming arrived later to support the operations.

Both vessels were deployed to British waters after the United States entered the war in the spring of 1917, where they were used to reinforce the Royal Navy's Grand Fleet. They were both present at the surrender of the German High Seas Fleet at Scapa Flow on November 21, 1918. While neither took part in combat operations during the war, it was determined during training operations that the five-inch (127mm) guns casemate-mounted right after at the main deck level and the foremost pair on either side of the first turret were essentially unusable in bad weather. As a result, they were removed along with the two five-inch (127mm) guns in the unprotected positions on the bridge superstructure.

Both Wyoming-class ships, as well as the older Florida-class and New York-class battleships, were heavily modified during the 1920s. All six were converted to oil-fired boilers, which proved to be far more efficient than the coal-fired models the ships had been constructed with. Oil-fired boilers also allowed for much greater cruising range.

However, the greatest change came to the USS Wyoming due to the 1930 London Naval Treaty. The warship was "demilitarized" and became a training ship with the hull number AG-19. Her side armor, torpedo bulges, conning tower, and one boiler were removed. After 1935, she regularly embarked U.S. Marines for training in amphibious assault landings.

The Wyoming was again modernized during the Second World War. Her last remaining 12-inch gun turrets were removed and replaced with four twin and two single-enclosed mounts for 5-inch/38 caliber guns. New fire control radars were also installed. These modifications allowed the warship to train anti-aircraft gunners with modern equipment that would be used in combat. In July 1945 she became an experimental gunnery ship with the Operational Development Force. She served in that capacity until August 1947, when she was decommissioned and sold for scrap.

Unlike her sister ship, USS Arkansas wasn't demilitarized. The warship was used in training operations in the 1930s, but later was used in a full military capacity. She escorted American occupation forces to Iceland, and was also among the U.S. Navy vessels present when President Franklin Roosevelt met with British Prime Minister Winston Churchill at the Atlantic Charter Conference in 1941.

After the United States entered the Second World War, she was employed escorting Atlantic convoys, and later supported the Normandy invasion in June 1944. She also participated in the invasion of Southern France later that same year before being sent to the Pacific. She supported the invasions of Iwo Jima and Okinawa.

After World War II she was used as a target ship for atomic bomb tests at the Bikini Atoll, and was sunk during such a test on July 25, 1946. She is still at the bottom of the atoll.