How Iran Tries to Intimidate the U.S. Navy’s Smaller Ships 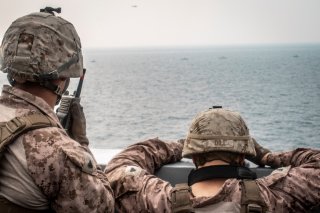 Iran is once again exhibiting threatening and provocative behavior in the Strait of Hormuz. The country has used its small boats to flex its military prowess as U.S. and Coast Guard ships recently transited the area.

As many as thirteen Iranian Revolutionary Guard Corps Navy fast-in-shore attack craft came within just several hundred yards of a small contingent of U.S. Navy and U.S. Coast Guard ships transiting the region, traveling at dangerous speeds greater than thirty-three knots, according to a Navy report.

Did the Iranians think they could successfully intimate smaller Navy patrol craft—especially since they are not large warships? Certainly, the Iranians know that the Navy coastal ships are armed; however, Iranian provocateurs may be less familiar with substantial upgrades the Navy has made to its patrol fleet in recent years, equipping them with a much greater degree of lethality, weaponry and attack range, in part to address and deter this kind of small-boat threat.

In recent years, the Navy has been arming its patrol ships with Raytheon-built Griffin B surface-launched, laser-guided missiles able to hit targets four kilometers away. The idea is to give the 179-foot long, shallow-water patrol ships the ability to destroy targets at ranges farther than their onboard guns can reach, Therefore, a Griffin-armed ship would be in a position to target and destroy approaching Iranian small boats at much greater standoff ranges and with much higher assured destruction.

Extended-range offensive firepower is intended to give the patrol ships enhanced surface warfare technology to position the craft for modern surface and shallow water threats. Laser-guided Griffin missiles, reaching what Raytheon developers describe as “beyond gun range,” give the boats the ability to strike threats such as swarming small boats at greater standoff distances. The attack capability enhancements, fortified by advanced sensors, better enable patrol ships to simultaneously address multiple threats or respond to approaching enemy fire more quickly. The Griffin can provide 360-degree coverage for the ship.

The weapons adjustments are particularly well suited for the Navy’s 5th Fleet area of operations, which covers much of the Middle East including flashpoint areas such as the Straits of Hormuz. The U.S. Navy is certainly no stranger to these kinds of Iranian provocations in the area, as it is something Iranian small boats have done on multiple occasions.

The twenty-five-foot wide patrol ships have an eight-foot draft and can reach speeds up to thirty-five knots. With a crew of twenty-eight, the ships are equipped to stay at sea for periods up to ten days. Many patrol ships stationed at 5th fleet headquarters in Bahrain are equipped with enhanced communication suites, improved navigation systems and an improved diesel engine control system. They also have two stabilized, electro-optic twenty-five-millimeter gun mounts, Navy data explains.