How Israel Is Helping Make America's Tanks Even Deadlier 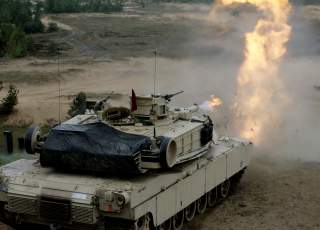 According to an industry announcement last week, the U.S. Army has received its first delivery of the Israeli-made Trophy Active Protection System (APS), which the Army plans to install on many of its M1 Abrams Main Battle Tanks to protect them against incoming rockets and missiles. The shipment represents the latest example of the Department of Defense expeditiously acquiring cutting-edge Israeli technology to address urgent operational threats, thereby buying time for the development of a domestic U.S. capability.

Trophy has been operational since 2011 and represents one of the most advanced designs currently in use. Today, it can be found on Israel’s Merkava tanks and Namer Infantry Fighting Vehicles. There are approximately 1,000 Trophy systems in active use by the Israel Defense Forces (IDF).

Like the IDF, the U.S. Army has identified the APS as a key capability, launching the “Modular Active Protection Systems” program to develop a common, layered, and networked APS. However, as of last year, this U.S. program was not as mature as Trophy.

In May 2018 testimony before Congress, General Mark Milley, then-Army chief of staff, suggested that the U.S. was behind Russia and Israel in the development of APS capabilities. Milley affirmed that the Army’s ultimate goal is to equip its entire force of fighting vehicles, tanks, and future combat vehicles with APS. In the hearing, Milley acknowledged that U.S. companies were “not ready yet for full rate production.”

In the meantime, Israeli systems are helping fill the capability gap.

In addition to equipping its M1 Abrams with Trophy APS, the Army has also examined the applicability of such systems to the M2 Bradley Infantry Fighting Vehicle and the Stryker Armored Personnel Carrier. Based on these trials, the Army chose a rival Israeli APS known as Iron Fist for its M2 Bradleys.

Last year, the Pentagon awarded Rafael, the maker of Trophy, a contract worth roughly $200 million to install the APS on American Abrams tanks. In total, the U.S. Army plans to equip tanks in four armored brigades with the system. According to the House Armed Services Committee, one of these four armored brigades includes a brigade in U.S. European Command’s prepositioned stocks.

While the U.S. procurement of the Trophy APS represents a positive step, the Army will need to train crews on its effective employment and maintenance. The acquisition of Trophy and Iron Fist provides an opportunity for U.S. and Israeli ground forces to pursue mutually beneficial cooperation in the development of tactics, operational concepts, and doctrine, given the IDF’s extensive experience utilizing APS in combat.

The Army’s acquisition of the Trophy APS is an example of how the U.S. benefits from its continued partnership with Israel. As the U.S. and Israel undertake generational reforms in military doctrine and weapons development, both countries might benefit from deeper security cooperation.

Purchasing finished weapons systems, such as Trophy, from one another that the other country develops independently is positive. However, deeper defense cooperation between the two nations could yield increased benefits. For example, if the U.S. and Israel had combined efforts on APS years ago, then DOD could have avoided the current capability gap it is now scrambling to fill. Therefore, the U.S. and Israel should consider establishing more systematic combined weapons research and development projects to together develop an array of cutting-edge military capabilities.

Bradley Bowman is senior director for the Center on Military and Political Power (CMPP) at the Foundation for Defense of Democracies (FDD), where Andrew Gabel is a research analyst. Follow Bradley and Andrew on Twitter at @Brad_L_Bowman and @Andrew_B_Gabel. Follow FDD on Twitter @FDD and @FDD_CMPP. FDD is a Washington, DC-based, nonpartisan research institute focusing on national security and foreign policy.

This article originally appeared at the Foundation for Defense of Democracies.