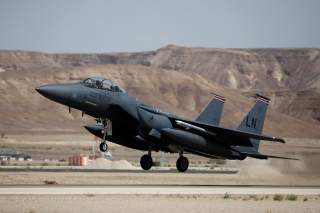 On Mar. 3, 2002 the first BLU-118/B was used against cave complexes in which al-Qaeda and Taliban fighters had taken refuge in the Gardez region of Afghanistan.​

Developed to meet the U.S. Air Force (USAF) requirement for air-to-ground missions, the F-15E Strike Eagle can carry 23,000 pounds of air-to-ground and air-to-air weapons and is equipped with an advanced navigation and an infrared targeting system, protecting it from enemy defenses.

Thanks to its capabilities the F-15E has been at the centre of every conflict in which the USAF has been involved since 1990 from Desert Shield to Operation Inherent Resolve.

Lauded by the international press as a grisly weapon that burned the oxygen from the lungs of its victims, the thermobaric bomb was seen as a solution to the Coalition’s main problem at that time — flushing out Taliban fighters hidden deep inside a complex cave network built into the mountains.

As told by Steve Davies in his book F-15E Strike Eagle Units in Combat 1990-2005, the BLU-118/B is a penetrating warhead filled with an advanced thermobaric explosive that generates sustained blast pressures in confined spaces such as tunnels and underground facilities. The fill is made up of PBXIH-135, which is one of the US Navy‘s insensitive polymer-bonded explosives, and HAS-13, or SFAE (solid fuel air explosive). It is fused by the Fuse Munition Unit 143J/B, which has been modified with a new booster and a 120-millisecond delay. The BLU-118/B uses the same penetrator body as the standard BLU-109 weapon, and all BLU-109 weapon employment options warheads are compatible with the new BLU-118/B. The bomb’s body can be attached to a variety of laser guidance system packages, including the GBU-15, -24, -27 and -28, as well as the AGM-130.

Employment techniques are said to include the following — vertical delivery, with the bomb detonated at or just outside the cave entrance; vertical delivery to penetrate and detonate inside the tunnel or adit; skip bombing with a short fuse to allow detonation at first- or second-impact (i.e. once inside the cave); and skip bombing with a longer fuse to allow penetration of a bunker door and maximum distance down a cave or adit.

On Mar. 3, 2002 the first BLU-118/B was used against cave complexes in which al-Qaeda and Taliban fighters had taken refuge in the Gardez region of Afghanistan. Attached to the GBU-24 guidance and control kit, the weapon was assigned the GBU-24H/B designation. Unfortunately, the weapon missed the cave entrance and was unsuccessful, although this was not reported to the media. Planning the mission had revealed that the weapon’s trajectory would have to be absolutely precise if it were to avoid a ridge that partly obscured the cave entrance. 4th FW pilot Capt Randall Haskin recalled;

`The margin for error was anticipated to be only 25 degrees. That margin was pretty small, all things considered. My Ops officer was at the CAOC when the mission was being planned, and they knew that there was a pretty significant possibility that it wouldn’t work — a 50 per cent chance, if I remember correctly, was what he told the Commander who was overseeing the operation.

`The pilot performed a last second bunt to delay bomb release so that the WSO could get a better view of the DMPI — that’s a normal thing for us to do with a standard LGB. With a Paveway III, however, the bunt put the bomb into a flight mode that was different to the one that had been planned, thus the bomb didn’t follow the planned flight profile and smacked the ridgeline instead of the cave entrance.’

The automatic change of delivery occurred when the bomb sensed that it was no longer going to be dropped from a level attitude. Even though altitude had been lost in the bunt, it was the change in attitude from level flight to greater than five degrees nose-down pitch that caused the mode change and resulted in the ridgeline impact.

F-15E Strike Eagle Units in Combat 1990-2005 is published by Osprey Publishing and is available to order here.