How Joe Biden Came Back from the Brink 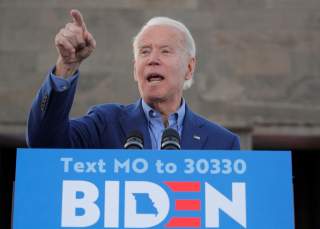 In late February, Joe Biden got emotional about the deaths of family members, in a strikingly moving conversation with Rev. Anthony Thompson, whose wife Myra was killed by a white supremacist.

Those public performances – one speaking off the cuff, and the other delivering material written by a speechwriter – are two reasons Biden was able to turn his campaign around. As a scholar of political rhetoric, the literature in my field suggests political candidates need to master both improvisation and authentic presentation of prepared remarks.

Biden’s abilities will help determine the course of his campaign, as President Donald Trump’s skills at public speaking will influence his reelection bid.

Two thousand years ago, Quintilian, the ancient Roman orator, first established the ideal that a good speaker needed to be able to write and deliver an effective speech as well as to improvise.

Both forms of public speaking hold advantages and dangers.

Improvisation requires a speaker to be his or her own speechwriter, which can reveal their internal thoughts and emotional constitution. But improvisation can also lead to incoherence.

Similarly, there are moments in public speaking that require the precision and discipline of the written text. But the demands of the written text delivered orally can, for some speakers, destroy the connection between the speaker and the audience.

Before the South Carolina primary, Biden had been ineffective, both when speaking off the cuff and when delivering speeches written for him.

In a campaign stop in New Hampshire, for example, he ignored his teleprompter and meandered from his main points.

But he turned that around in late February. In his response to Thompson, Biden spoke from the heart about the loss of his first wife, daughter and, more recently, his son. In doing so, he displayed a deep sense of empathy. By all accounts, his audience found him to be authentic.

Then, in his victory speech, he coherently delivered the words written by his speechwriters, with the pacing, tone, volume and eloquence he had lacked in earlier speeches.

It remains to be seen whether he can sustain that performance, or whether he returns to his normal lackluster performance in moments requiring improvisation and when reading written texts.

Trump is an improviser

Research I have done with speech scholar William Keith shows that Donald Trump is most effective when he improvises. His teleprompter-based scripted speeches are stilted and flat.

For example, his Jan. 8, 2020, address on Iran was delivered in a monotone, with slurred words.

Trump often resists the discipline of a script with riffs that do not complement his main message, even targeting the teleprompter as a source of inauthentic speech. When speaking to the Conservative Political Action Conference in March 2019, Trump declared: “You know, I’m totally off script now … And this is how I got elected, by being off script. And if we don’t go off script, our country is in big trouble.”

He’s right: Speechwriters Corey Lewandowski and George Gigicos spent two days writing Trump’s June 16, 2015, presidential announcement speech. As Lewandwoski and David Bossie relate in their 2017 book “Let Trump Be Trump,” “Trump gave a quick look at the sheet of paper Corey handed him, folded it up, and put it in his breast pocket, never to look at it again. Then he delivered what is arguably the most memorable announcement speech of any candidate for office in history. It was a forty-five-minute freestyle soliloquy.”

From the very beginning of his campaign in June 2015, Donald Trump has focused on impromptu speeches, rather than scripted ones. AP Photo/Richard Drew

Connecting with the people

Trump has honed his ability to engage in “freestyle soliloquy” in the more than 430 rallies he has held since his first one in Manchester, New Hampshire, on June 17, 2015.

“It’s nice to just hear somebody say exactly what they think,” Cheryl Caza-Tobey, a Hooksett, New Hampshire, resident who attended that Manchester rally told a RealClearPolitics reporter. “I thought, ‘Well, he’s just saying it like it is.’ A lot of us are thinking the same exact thing. I hate to say it, but every four years somebody comes up and they say the same things over and over again, and nothing changes.”

Caza-Tobey was representative of Republican voters who found Trump authentic. Unlike other candidates, Trump was transparent, making public his internal thinking and ideas, even if they were socially taboo. Those who dislike Trump and haven’t witnessed or listened to a full rally of his dismiss his improvisations and digressions as incoherent and his message as cheap entertainment.

Those judgments miss the power of his persuasive energies. How well the candidates present themselves, both in scripted and offhand ways, can turn campaigns’ fortunes for good, or for ill.

David A. Frank, Professor of Rhetoric, University of Oregon