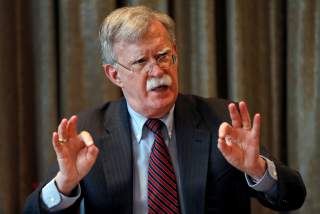 Key point: Bolton promoted a hardline on nearly everything. But with him out of the picture, there is a chance for more peaceful, nuanced policies to be pursued.

U.S. President Donald Trump tweeted Sept. 10 that he had informed national security adviser John Bolton that his services were no longer needed. Trump added, "I disagreed strongly with many of his suggestions, as did others in the Administration, and therefore I asked John for his resignation." Bolton's removal raises questions about several foreign policy issues marked by either policy inconsistencies or disagreements among Trump administration officials. The decision to dismiss Bolton comes as Trump is struggling to remove political distractions, avoid military confrontation and demonstrate some foreign policy wins as he heads into the 2020 U.S. presidential race.

Bolton's departure may have several geopolitical ramifications. These include:

The departure of Bolton removes a strong advocate of Iranian regime change and the architect of the U.S. withdrawal from the Iran nuclear deal and the maximum-pressure sanctions campaign against Tehran, which had raised the specter of another costly conflict in the Middle East that Trump very much wants to avoid. It will be important to watch if Trump eases his position on Iran by, for example, showing a willingness to offer some oil waivers to allow a French proposal on an Iranian credit line to move forward in return for a de-escalation of nuclear and military tensions. If Trump relaxes his position, this could ease the way for a face-to-face meeting between Trump and Iranian President Hasan Rouhani at the U.N. General Assembly later this month. But if Trump does not budge on sanctions, Bolton's departure might make Iran calculate it can act more aggressively against the United States to break another stalemate if Tehran can be more confident following Bolton's removal that Trump has no appetite for conflict.

Bolton was the primary administration critic of the legacy arms control framework, playing a critical role in the quick decision by the United States to withdraw from the 1987 Intermediate-Range Nuclear Forces (INF) treaty and spearheading much of the opposition on the issue of the New START's renewal, and his exit may lessen visceral opposition within the administration to arms control efforts like New START. Still, it remains to be seen whether the White House will substantially shift its position on arms control following Bolton's departure. A big driver for the U.S. withdrawal from the INF treaty was to more effectively compete with China's development of ground-based long-range intermediate missiles. Moreover, Trump himself advocates including China in any new arms control treaties, which Beijing will continue to resist. Unless the White House moderates its demands on China's inclusion or on its stringent demands on Russia, negotiations for New START due to expire in 2021 will likely remain stagnant

Bolton had opposed Pompeo's efforts to negotiate a peace deal with the Taliban, a plan that involved an initial drawdown of 5,000 U.S. troops in exchange for counterterrorism commitments by the Taliban against al Qaeda and the Islamic State, and Trump called off his administration's nearly yearlong dialogue with the Taliban on Sept. 7 and canceled a secret summit at Camp David that would have involved separate meetings with the Taliban and Afghan President Ashraf Ghani. But Trump, who hasn't ruled out a troop drawdown, understands that a political settlement is the most realistic way to end the conflict. With Bolton gone — and the 2020 elections fast approaching — Trump could eventually revive the Pompeo-backed peace plan as he eyes a foreign policy victory to tout on the campaign trail.

Bolton's exit removes a major White House voice against a compromise deal with North Korea. Although Bolton had been sidelined as the administration pursued an approach of outreach, he had contributed to the failure in February of the U.S.-North Korea summit in the Vietnamese capital of Hanoi. His firing will send a strong signal to Pyongyang ahead of potential late September bilateral meetings. Given that North Korea won't be inclined to offer much in the way of concessions, the United States will find any interim deal with Pyongyang unpalatable. Even so, the two sides might still strike a bargain, however imperfect, to avoid renewed confrontation.

Bolton's influence on U.S. policy on Venezuela, where he had advocated military intervention, had already waned in the wake of the unsuccessful coup attempt by Venezuelan opposition leader Juan Guaido that began April 30 — an attempt on which Bolton had helped shape U.S. policy. The White House is likely to continue to rely on sanctions pressure rather than entertain military options against Venezuela given a host of other U.S. foreign policy priorities.

How Bolton's Removal as U.S. National Security Adviser Will Shape U.S. Foreign Policy is republished with the permission of Stratfor Worldview, a geopolitical intelligence and advisory firm.