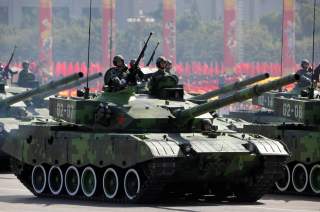 Key point: A drone tank that can help with sea invasions sounds dangerous, but how good is Beijing's technology? So far, China's claims sound just too grandiose.

China has unveiled what it claims is the world’s first armed robot amphibious vehicle.

The Marine Lizard sounds essentially like a robotic, amphibious tank that can lead amphibious invasions and provide fire support for the assault troops.

But is this a robotic revolution, or is the vehicle too good to be true?

Chinese media describes a boat/tank of astounding capabilities. “In ship form, the 12-meter-long [39.3 foot] Marine Lizard is a trimaran propelled by a diesel-powered hydrojet and can reach a maximum speed of 50 knots while maintaining stealth,” according to China’s Global Times newspaper. “When approaching land, the amphibious drone ship can release four continuous track units hidden under its belly, and travel at 20 kilometers [12.4 miles] an hour on land.” The vehicle can travel even faster if larger tracks are installed.

The Marine Lizard is equipped with two machine guns, a vertical launch system for anti-ship and anti-aircraft missiles, as well as radar and optical sensors, an official with the vehicle’s manufacturer, Wuchang Shipbuilding Industry Group, a subsidiary of China Shipbuilding Industry Corporation, told Chinese media.

The Marine Lizard has a range of 1,200 kilometers [746 miles]. The vehicle can travel autonomously, with an AI that can avoid obstacles, and navigate using China’s Beidou GPS satellite system.

Chinese military experts told Global Times that the Marine Lizard could be used to seize and defend islands, such as in the South China Sea. “This amphibious drone boat is suitable for island assault operations as a swarm of such drone ships could lead an attack following a first wave of artillery and air strikes,” Global Times said. “Approaching land from the sea is a dangerous task, and the Marine Lizard can take advantage of its unmanned nature to discover enemy positions and provide suppressive fire as troops follow.”

The vehicle could also be used for coastal defense. The Wuchang manager “said it can remain dormant on an uninhabited island for up to eight months before engaging in combat once it receives orders.”

Chinese experts suggested the Marine Lizard could form part of an all-robot task force, working in an integrated team with aerial drones and other robotic warships.

That’s quite an impressive list of capabilities – or marketing hype. First, what should the Marine Lizard be compared to? The U.S. Marine Corp’s AAV-P7, a lightly armed and armored amphibious transport vehicle, is about 26 feet long and weighs a little over 30 tons. The Cold War Soviet PT-76 amphibious light tank, lightly armored and equipped with a 76-millimeter cannon, was about 25 feet long and weighed about 15 tons.

The Marine Lizard appears to be larger than either of those vehicles (photos of the Marine Lizard vaguely resemble an AAV-P7). Because a combat robot doesn’t need to carry passengers and crew, its internal and external space can be totally devoted to weapons, fuel and sensors. A vehicle with a long, flat deck could accommodate the sort of vertical launch system fitted to modern warships, in which missiles are fired from tubes set into the deck.

Still, before anyone succumbs to visions of Chinese robot armadas storming South China Sea islands, it’s worth remembering the old axiom that if it’s too good to be true, it probably is. For example, one hazard for amphibious vehicles is being swamped by heavy seas. It’s not clear how well the Marine Lizard will function in choppy waters.

As a combat vehicle, it’s also not clear how thickly armored and survivable the Marine Lizard is, or the accurate is the description of its missile and sensor capabilities. If it is armed with anti-ship missiles, this suggests the vehicle either has powerful sensors to detect vessels far out to sea, or it is being fed targeting data from other platforms.

Also interesting is the assertion that the Marine Lizard could be left unattended on islands for months. Killer robots hidden on Pacific islands like some sort of automated pillbox or land mine could trigger international protests or incidents, especially if weapons are fired accidentally. And who controls those weapons? If human operators must be in the loop for Marine Lizard to fire, then the vehicle is dependent on reliable data links with its control station. If the Marine Lizard’s AI can autonomously fire its weapons, then this raises some truly frightening possibilities for foe and friend alike.