How Many Americans Will Be Killed by the Coronavirus? 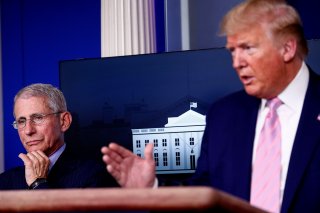 This morning, April 2, the death toll in the United States stemming from the coronavirus pandemic crossed 5,700. Over 1,000 deaths were recorded from the disease in the previous twenty-four hours. Recently, Dr. Anthony Fauci, Director of the National Institute of Allergy and Infectious Diseases and one of President Donald Trump’s top advisors during this crisis, said that the United States should be prepared to face at least 100,000 deaths by the time the virus was under control.

“As sobering a number as that is, we should be prepared for it,” Dr. Fauci said at a presidential press briefing. “Is it going to be that much? I hope not. And I think the more we push on the mitigation, the less likelihood it would be that number. But as being realistic, we need to prepare ourselves that that is a possibility, that that is what we will see.”

“No one is denying the fact that we’re going through a difficult time right now,” Fauci concluded.

Dr. Deborah Birx, the coordinator for the White House Coronavirus Task Force and President Trump’s other top medical advisor, clarified that the 100,000-death minimum was a prediction extrapolated from current death rates in New York, New Jersey, and Connecticut.

These states are the site of the largest coronavirus outbreaks in the country. New York state has suffered roughly 40% of the nation’s coronavirus deaths, over 2,300. And most of those are headquartered in and around New York City.

“We are losing people every day,” said Mayor Bill de Blasio, New York City’s mayor. “The next few months will be painful and stress our health care system like never before.”

New Jersey is in second place, with 537 deaths currently. Their Governor, Phil Murphy, has had one of the strictest responses to the pandemic, threatening to use the police to break up gatherings larger than ten people and fining the participants.

Dr. Birx said that if other cities remained steady in their containment policies and were able to keep their numbers below the curves seen in New York and other urban centers on the East Coast, then the national death toll could be “significantly lower.”

On the other hand, while 100,000 is considered the low end, the body count could be as high as 240,000 if social distancing is not followed. Originally President Trump had mused whether he should call for the lifting of restrictions by Easter, but instead decided to extend the recommendations until April 30.

Most public health officials believe that the pandemic will last much longer. It will be difficult to develop a vaccine before the end of 2020. President Trump described the situation as a “great national trial unlike any we have ever faced before.”

“It’s a matter of life and death, frankly,” the president summarized.