How the Marine Corps Plans to Implement Its Strategic Firepower Plan 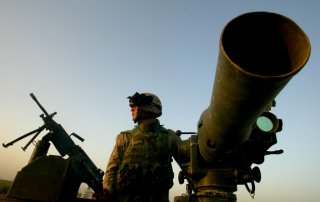 The U.S. Marine Corps is divesting itself of heavy, hard-to-transport tanks and massively arming its smaller, lighter and more deployable assets with heavy anti-armor firepower to ensure it remains capable of mechanized armored warfare in a changing threat environment.

The Marine Corps is fast progressing with a broad strategic and tactical pivot toward its maritime roots and extensively shifting focus toward preparations for major-power warfare, seabasing, sea-control and multi-domain amphibious attack against technologically sophisticated adversaries. A huge part of this, particularly given that it is removing tanks from its arsenal, the Marine Corps is incrementally adding advanced, extremely powerful, yet highly expeditionary and mobile anti-armor weapons, rockets and missiles.

This transition, evolving out of what were primarily land engagements for nearly two-decades, is articulated in an interesting paper called the “Marine Corps Vision and Strategy 2025.”

“We will practice a self-disciplined approach to force design and development. These efforts will strike a balance between being heavy enough to sustain expeditionary warfare and light enough to facilitate rapid deployment,” the essay explains.

More light tactical vehicles are being armed with mobile anti-tank guided missiles such as Raytheon Javelins and tube-launched, optically tracked, wire-guided (TOW) missiles. These missiles along with new weapons innovations are intended to increase speed and lethality at sea and ashore. As part of this, the Marine Corps is now fielding a new reloadable, recoilless rocket called the M3A1 Multi-Role Anti-Armor Anti-Personnel Weapons System (MAAWS) to infantry Marines in Camp Lejeune, North Carolina, according to a Marine Corps report.

“All Fleet Marines will receive the MAAWS by the end of 2023 and Reserve Marines by 2024. He projects every Marine Corps battalion to have the weapon in their arsenal by 2025.

Built by Raytheon and Saab, MAAWS is Intended to support maneuvering infantry with expeditionary firepower against enemy armored vehicles, fortifications and structures with precision and at longer ranges than previous weapons. Interestingly, the weapon is engineered with an advanced ability to fire airburst rounds, munitions which are programmed to detonate, fragment and explode at a designated point in the air, therefore hitting otherwise hidden or obscured targets in defilade. It can also fire penetrating rounds intended to pierce armor protection before detonating to increase lethality effects.

“The system consists of the M3A1 Carl Gustaf Recoilless Rifle, a fire-control system and a backup reflex sight Marines can use if the primary optic malfunctions. It includes munitions that provide obscuration, illumination, anti-personnel, armor penetration, bunker- and hardened-facility penetration, and other destruction capabilities,” the Marine Corps report said.

As an extended attack capability beyond what’s possible with the Marine Corps’ existing Mk153 Shoulder-Launched Multipurpose Assault Weapon, the MAAWS can hit targets at further ranges and hit moving targets with a new generation of fire-control technology.

The Marine Corps report added that the MAAWS will also supplement the explosive power of the M72 Light Anti-Tank Weapon, a portable, one-shot anti-tank weapon..

“We combine maneuver with firepower to produce a violent and lethal outcome for the adversary. We seek to concentrate our strength against enemy weakness, exploiting his critical vulnerabilities while minimizing and protecting our own. We believe our decision cycle is faster than the enemy’s, allowing us to exploit the advantages of speed, focus, tempo, shock, and surprise,” the Marine Corps report states.