How the Media Shields Hamas’ Terrorism Against Israel 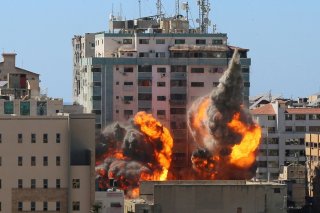 On May 15, an Israeli airstrike wiped out a twelve-story al-Jalaa building in Gaza City that housed several media outlets, including the offices of the Associated Press and Al-Jazeera. The Israeli Defense Forces (IDF) maintain that Hamas, the U.S. designated terror group, used the building as a headquarters to obtain military intelligence and weapons developments.

IDF spokesperson Lieutenant Colonel Jonathan Conricus defended the airstrike by declaring the fundamental function of this media tower was not journalistic, but rather a significant military installation used by Hamas. Conricus indicated that the terror group used this building to collect and analyze military intelligence, research and develop weapons, and store technological tools. Conricus also emphasized the IDF’s efforts to warn civilians and journalists of the impending assault. According to the IDF and AP/Al-Jazeera personnel, journalists in the building were given an hour to collect essential reporting equipment and to evacuate from the premises.

Following the take-down of the al-Jalaa complex, major international news outlets have condemned Israel’s actions as “disturbing” and “barbaric.” In a public statement, the CEO and President of AP Gary Pruitt announced that “we (AP) are shocked and horrified that the Israeli military would destroy this building… We have had no indication Hamas was in the building or active in the building.”  A statement from Al-Jazeera mirrored this rhetoric. “Al Jazeera condemns in the strongest terms the bombing and destruction of its offices by the Israeli military in Gaza and views this as a clear act to stop journalists from conducting their sacred duty to inform the world and report events on the ground.”

Both Al-Jazeera and the Associated Press are calling for an independent investigation into this airstrike, citing a lack of Israeli evidence. Conricus confirmed the Israeli military was compiling evidence for the United States.

Hamas has a long history of using civilians and residential areas to dissuade Israeli attacks, and the media has a long history of ignoring it. In an Atlantic article published shortly after the 2014 Gaza war, former AP report Matti Friedman meticulously denotes how the foreign press corps reframed the Israeli-Palestinian conflict. Friedman calls out the Western press in Israel, who are trusted by the world to explain complicated events that unfold across the globe, for reporting based on a pre-conceived narrative and not reality.

Among the myriad of examples Friedman provides detailing the unethical behavior of the press is a poignant reference to his former employer. “The AP staff in Gaza City would witness a rocket launch right beside their office, endangering reporters and other civilians nearby—and the AP wouldn’t report it, not even in AP articles about Israeli claims that Hamas was launching rockets from residential areas. (This happened.) Hamas fighters would burst into the AP’s Gaza bureau and threaten the staff—and the AP wouldn’t report it. (This also happened.)”

In its most recent statement condemning Israel’s al-Jalaa airstrike, the AP fails to mention the detailed evidence that exists describing Hamas’ continued use of civilians and residential areas in conflict. Following the 2014 Gaza war, the AP itself reported that there was “growing evidence that Hamas militants used residential areas as covers for launching attacks at Israel, at least at times.” This piece was published days after UNRWA, the United Nations Relief and Works Agency for Palestinian Refugees in the Near East, found rockets hidden in a school in Gaza for the second time.

Israel seems to always function as the aggressor in the eyes of the media, even if their foe in conflict is a designated terrorist organization. The leadership of Hamas and Palestinian Islamic Jihad (PIJ) have reaped the benefits of having the international media on their side. Hamas’ indiscriminate rocket attacks targeting populated cities in Israel cannot be justified. Hamas’ use of human shields and civilian structures in conflict cannot be defended. Hamas can carry out acts of war against Israel first and not be deemed the “aggressor.” Rationalizing the behavior of this terrorist organization will only lead to greater death tolls and the sustained suppression of Palestinians in Gaza. And it is extremely implausible that the Associated Press and other international news services were unaware of this and Hamas’ presence in the 12-story al-Jalaa building in Gaza City that Israeli jets destroyed on May 15.