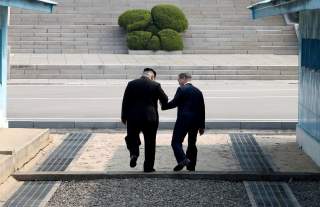 “He just doesn’t care who gets the credit. That’s the truth.”

That’s what a senior South Korean government official said recently when I asked what President Moon Jae-in thought of how people perceive his role in helping to craft a lasting peace on the Korean Peninsula, and specifically how much credit he deserves. “I would say Moon’s philosophy is that he doesn’t care who gets credit, a Nobel Prize, awards, fame or recognition for the changes we are seeing here in Korea. All he wants is a day where the thought of war on the peninsula is impossible to fathom.”

We might just as well call President Moon Mr. Impossible. That’s the best way to describe what is taking place today in Northeast Asia—a shift that at the end of 2017 would have seemed inconceivable. North Korea has not fired an intercontinental ballistic missile (ICBM) in over a year nor tested a nuclear weapon. There have been three inter-Korean summits with a fourth likely coming soon. Moreover, there have been two U.S.-North Korea summits counting the one about to happen in Vietnam. There seems to be a once-in-a-generation chance to forge a different relationship with the Hermit Kingdom, with Moon being essentially the man in the middle between Pyongyang and Washington.

That’s no easy task. While it was clear Moon entered office seeking a new beginning with his brethren in the north, South Korean officials in Seoul right around this time a year ago always made it a point to explain that Moon did not want to be perceived as a mere go-between when it came to U.S.-North Korea ties. As one official based in Seoul explained: “Our job is not to be seen as carrying water for Washington or Pyongyang. That could get complicated and unstable. We are happy to help as we can, but that can’t be our role.”

How times have changed—and for the better. In a strange mix of fate, time, and circumstance, Moon has emerged as perhaps the only person who understands on the most intimate level what President Donald Trump and Chairman Kim Jong-un are actually thinking about the difficult issues that impede better relations. Thanks to the January 2018 New Year’s Day speech opening the door to talks, Moon jumped at the chance and leveraged the Olympic Games in South Korea to his advantage, clearing the way for much-needed dialogue. Those successful games paved the way for the first inter-Korean summit, where Kim and Moon met at the Demilitarized Zone, with Moon making history crossing into North Korea and shaking hands with Chairman Kim.

And let’s not gloss over the rough patches Moon has had to smooth over. Don’t forget how a piece of North Korean propaganda nearly scuttled the first Trump-Kim summit, with Washington canceling the summit in retaliation. Absent Moon’s efforts, holding what can only be called a snap summit with Kim to break the impasse, we might not be talking about a Hanoi Summit after all.

Of course, while Moon’s motives are to foster peace and prosperity as well as an end to decades of hostile relations between Washington and Pyongyang, there is a much deeper driving force at work. I suspect Moon looks at the north with a mixture of hope and fear all wrapped into one, and that goes way beyond denuclearization. He likely is concerned that:

-North Korea’s “new way,” as laid out in Kim’s 2019 New Year’s Day Address, could mean that if talks with Washington hit an impasse, Kim will simply decide to go all in on Chinese economic aid and assistance at some point. Seoul looks at the north, knowing it has few options for large scale economic growth now that its economy has reached first-world status and its demographics are less than ideal. Furthermore, North Korea could open trillions of dollars in potential profits for the south. In many respects, there is a race to Pyongyang that is now just beginning, and who is on the ground first when North Korea opens for business could stand to gain profits beyond anyone’s wildest dreams.

-Indeed, Moon’s strategy towards the north goes way beyond just trying to forge better relations and economic ties. I suspect Moon believes the best way to ensure North Korea is no longer a military threat is to tie its fortunes to not only South Korean investment but eventually the United States, the European Union, Japan and other nations eager to do business someday in the north. Pyongyang’s behavior would need to change knowing its economic future depended on the goodwill of corporations from nations that simply would not invest if we went back to the days of missile and nuclear weapons tests. Additionally, Pyongyang would need to clean up its human rights record. If those challenges can be addressed, and if Moon is thinking long-term, he might be gambling that rapid economic growth could be the ultimate security guarantee for the Kim regime, all thanks to South Korea and its allies—and not China.

-In his heart of hearts, Moon is a Korean nationalist—and I mean that in a positive way. Moon believes that the Korean people must solve their divide largely on their own terms, avoiding outside powers dictating how reunification or even a less ambitious confederation would unfold. Washington or Beijing might not like that approach, but a Korean-led process of someday rebuilding a nation still dealing with its colonial legacy and its division after World War II would be one that is surely more sustainable and embraceable over the long-term.

Whatever happens in the days ahead, if there was a different person sitting in the Blue House, then geopolitical events on the Korean Peninsula might have unfolded very differently. The Moon Miracle is real—and we should embrace it.

Harry J. Kazianis is Director of Korea Studies at the Center for the National Interest. You can follow him on Twitter: @Grecianformula.