How Nazi Germany Could Have Won the War in The West (Get Churchill to Make Peace?) 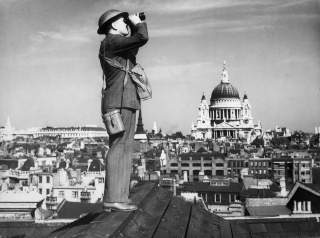 In the last article, we examined how Germany might have won the war if Hitler had been patient enough to wait on risking war until the German army was ready to fight. In this article, we will consider some ways the Germans might have goaded the British into accepting a negotiated peace before the German invasion of the Soviet Union in June 1941 while keeping the United States officially neutral in the conflict.

Don’t allow the withdrawal of British Expeditionary Forces at Dunkirk

Hitler’s decision to spare the BEF at Dunkirk and allow their evacuation to Britain from May 26 to June 4, 1940, was meant to underscore the fact that he wanted peace with Britain. Ironically, it was his very decision to deliberately spare the BEF and allow the withdrawal of 336,000 British and 210,000 French Ninth Army troops that enabled Churchill to reject Hitler’s 1940 peace offer, which history shows he seriously considered accepting on May 26, 1940 before the BEF had been saved. It is a supreme irony of history that the one time Hitler proved he was serious about peace with Britain, his peace offering was precisely what ended up causing them to refuse, costing Germany any hope for victory in the war. The terms of this offer reportedly closely mirrored Hitler’s proposed May 1941 peace offer, including granting nominal independence to Poland as a German protectorate along with a full German military withdrawal from France (except for Alsace-Lorraine), Belgium, Holland, Denmark and Norway. Peace with Britain, even if temporary, likely would have enabled Germany to negotiate favorable peace terms with the Soviets along the lines Stalin himself proposed. Of course, if Hitler had accepted a Four-Power Peace Conference and/or only occupied the Polish Corridor, he would never have had to attack Britain or France to win the war in the first place.

Rear Admiral Wilhelm Canaris served as head of the German Abwehr Military Intelligence from 1935 to 1944. During this time, he helped plot the September 1938 coup against Hitler which was never carried out. However, once his plot to overthrow Hitler and the Nazis was aborted, he began a campaign of sabotage against Germany, which helped to ensure her eventual defeat. The first of these acts of sabotage was known as the “Dutch War Scare” of January 1939, in which he sent Britain false reports that Nazi Germany intended to invade Holland and then use it as a base from which to destroy British cities and bomb England into submission. These false reports caused British prime minister Neville Chamberlain to make his “continental commitment” to France the following month—sending a large British ground force to the defense of France in the event of the outbreak of war with Germany. They also may well have helped spur Chamberlain’s subsequent about-face in issuing the British military guarantee of Poland against German aggression in March 1939, without which the war likely would have been averted.

Then, in early 1940, Canaris began revealing all of Germany’s battle plans to the Western Allies, starting with Hitler’s planned invasion of France and the Low Countries which likely resulted in a very substantial number of German military casualties. Following the fall of France in June 1940, Spanish dictator Francisco Franco would likely have joined the Axis had Canaris not repeatedly talked him out of it. If Spain had joined the Axis, Portugal might have felt pressured to join the Axis as well to avert a possible German invasion. Spanish entry into the war would have enabled Hitler to capture Gibraltar and control the western approaches to the Mediterranean. Along with the German capture of the BEF at Dunkirk, this almost certainly would have caused Britain to accept Hitler’s generous June-July 1940 or May 1941 peace terms, which in turn would have almost certainly precluded U.S. entry into the war and enabled Germany to survive its war with the Soviet Union. Hitler then planned to invade Switzerland, but Canaris was successful in convincing the fuhrer that doing so would not be worth the cost. In summer 1943, Canaris successfully negotiated an agreement with the heads of U.S. and British intelligence to overthrow the Nazis and assassinate or hand over Hitler in exchange for an end to the war in the West and Germany being allowed to continue fighting the Soviets in the East. Regrettably, President Roosevelt and Winston Churchill refused to honor the agreement, foolishly insisting on nothing less than unconditional surrender in furtherance of Soviet objectives.

Germany had to fight a two-front war in World War One, leaving German generals fearful about having to fight one again. During the Battle of Britain, Hitler should have continued bombing the RAF airbases when it was on its ropes instead of yielding to Churchill’s provocation to bomb civilian targets after Churchill ordered Bomber Command to bomb Berlin in late August 1940. Germany could have invaded and possibly succeeded in occupying part or all of Great Britain had Hitler won the Battle of Britain against the Royal Air Force. Even if the Germans were only partially successful in achieving their invasion objectives, the British would likely have quickly sought peace with Germany in order to prevent the capture and occupation of London and obtain a rapid withdrawal of German troops from the British Isles. However, Hitler may never have been serious about invading Britain, as he viewed them as natural allies against Soviet Communism and hoped they would agree to his generous peace terms delivered by Deputy Fuhrer Rudolf Hess in May 1941. So he proceeded to cancel the German amphibious invasion plan, known as Operation Sea Lion, in September 1940.

Rather than take the very substantial risk of heavy German losses by launching an all-out amphibious invasion of Great Britain, Hitler might have chosen to pursue General Heinz Guderian’s daring plan to use a couple of Panzer divisions to capture Gibraltar, Spanish Morocco, French Morocco, Rio De Orio, the Canary Islands, Egypt and the Suez Canal in late 1940  or early 1941 in order to cut off British forces from their Mediterranean colonies. This though would have required Spanish approval for German forces to travel through Spain. Upon massing German troops on the Franco-Spanish border, Franco would not have refused due to his fear that if he did, German forces would invade and occupy Spain and depose him from power. If nothing else, Spain would have remained a pro-Axis neutral, though with a large number of German troops in the country, Franco might have felt pressured to join the Axis Powers. After capturing Egypt and the Suez Canal by early 1941, Germany would have been in a position to successfully bribe Turkey to join the war with promises of a return of the former Ottoman provinces of Egypt (divided with Italy), Syria, Lebanon, Palestine and parts of oil-rich Saudi Arabia. Just as he did in actual history, Hitler could have also offered Turkey the return of the oil-rich southern Caucasus Soviet republics to Turkish control.

With Turkish military assistance and the Berlin to Baghdad Highway having been completed in 1940, Axis conquest of the region would have been made much easier. With the British largely expelled from the Mediterranean, it would have fallen under Axis control. Then they could have supported the pro-Axis coup in oil-rich Iraq in April 1941 and returned Kuwait to Iraqi control. Britain and the Soviet Union would likely have responded to a German intervention in support of the new Iraqi government by staging an unprovoked invasion of Iraq just as they did in actual history in September 1941. The Germans could have occupied the western border region with Iran, but moving forces beyond that would have been difficult. Nevertheless, their increasing threat to Allied control of Iran and potential threat to British control of India—where they could provide arms and military support to the pro-Axis Indian National Army in their attempts to liberate India from British rule—would have posed a very serious threat to the British Empire.

Had the Germans pursued this option, the British likely would have sought peace after the fall of the Suez Canal, and would certainly have done so following a German-Turkish conquest of Palestine and Iraq—the source of much of their oil. This path also would have forced the Soviets to divert a significant number of Red Army divisions to their southern flank to defend against a possible Axis invasion of the Caucuses from Turkey and/or Iran. This plan also would have allowed a peace treaty to be signed with pro-German Vichy France, after which all German troops could have been withdrawn. Hitler could have also accomplished his objective of deporting all European Jews to Palestine or Madagascar—which the British had refused to allow him to do during the war in actual history—possibly averting the Jewish Holocaust. Needless to say, a successful Middle Eastern campaign would have successfully resolved the Axis fuel crisis while increasing the number of allies fighting on their side enabling it to fight more effectively and for a greater number of years than in actual history.