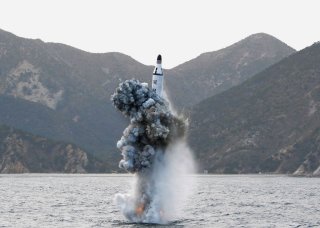 The KN19 is an advanced iteration of North Korea’s existing, Soviet-made Kh-35 anti-ship cruise missiles. According to the U.S. intelligence community, the KN19 boasts an effective operating range of 200 to 250 kilometers and performed according to Democratic People’s Republic of Korea’s (DPRK) specifications in a series of missile tests conducted over the Sea of Japan in 2017.

The North Korean People’s Navy (KPN) is also making strides in the construction of a new, nuclear-armed submarine that potentially possesses the range to threaten not only Japan and South Korea, but even Taiwan, without leaving North Korean waters. Details remain scant, but photos published by North Korean state news suggest a refitted Romeo-class design. The Romeo class, or Project 663, is a line of Soviet-made diesel-electric submarines—the KPN purchased and license-copied approximately twenty of these submarines from China during the mid-1970s.

The KPN is also in the midst of developing the successor to its Sinpo-B ballistic submarine line. This upcoming nuclear-powered vessel, dubbed “Sinpo-C” by U.S. intelligence observers, was first spotted in 2016 and is believed to support air-independent propulsion (AIP) technology— a method of propulsion allowing the submarine to operate without direct access to outside air. An AIP submarine can remain submerged for prolonged periods and, depending on the type of AIP design used, generates up to half the noise of a traditional diesel-electric powered submarine.

The advanced Romeo variant and Sinpo-C project represent North Korea’s commitment to modernizing its large, but drastically outdated submarine fleet. Following a cost-conscious strategy that parallels the Russian navy’s post-soviet developmental model, the KPN is modernizing largely through deep refits of existing models. DPRK’s cash-strapped military-industrial sector seeks to iterate on the designs that they already possess, a move aimed at expediting development cycles and cutting back on the steep R&D outlays involved in researching, designing, testing, and producing a new submarine class.

Financial concerns are especially poignant in the context of the international sanctions regime arrayed against North Korea, making it difficult for the DPRK to sustain the costly economies of scale necessary to serially produce new military hardware designs.

The KPN’s upcoming submarines are likely candidates to carry the new short and medium-range entries in North Korea’s burgeoning missile arsenal, which were recently outlined in a Congressional Research Service (CRS) report. The DPRK’s updated submarines provide a more reliable platform for its ongoing testing of conventional and nuclear submarine-launched ballistic missiles (SLBMs) near South Korean and Japanese waters, a tactic long used by Pyongyang as a form of diplomatic pressure and prospective negotiating chip against Seoul.