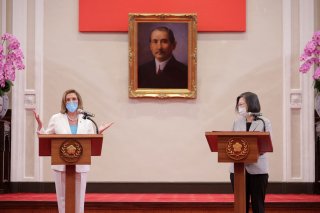 However, the Chinese Nationalist Party, also known as the Kuomintang (KMT), who fled mainland China to the island of Taiwan between 1945 and 1949, faced a political conundrum. Long viewed as being supplicant to China, the KMT has suffered politically. After crushing defeats in the 2016 and 2020 presidential elections and continued losses in legislative elections, the KMT is attempting to change its image—but old habits die hard.

The visit by Pelosi to the island, the first of such a high-ranking American elected official since House Speaker Newt Gingrich's in 1997, followed by the visit of Saint Vincent and the Grenadines prime minister Ralph Gonslaves on August 8, put the KMT in a bind ahead of November’s local elections.

The party is caught between the unificationist sentiments of the old guard and the imperative to reform. Kuomintang chairman Eric Chu Li-luan, who lost the 2016 presidential election by 25 percentage points, stated that the KMT supported Pelosi's visit and criticized China for threatening Taiwan with multiple shows of military force. Since taking over as party chairman last year, Chu has frequently visited the United States and proclaimed the party of Chiang Kai-shek as “pro-U.S.” He has downplayed the “1992 Consensus,” which recognizes an interpretation of “One China,” as being “a consensus without consensus.”

Chu had been drafted as an emergency candidate in 2016 because the party’s original nominee, Hung Hsiu-chu, was so detested for her pro-China views. Last week, Hung appeared on China’s state-run media network CGTN and accused Nancy Pelosi of “coming with an ulterior motive.” CGTN also hosted a few other retired KMT politicians to bash the trip.

Currently-serving representatives like Wu Sz-huai, Yeh Yu-lan, Fai Hung-tai, and Lee De-wei also struck critical tones. Fai said Pelosi’s visit was more dangerous than the 1996 Taiwan Strait crisis. Lee accused the United States of “playing the Taiwan card” and said, “[t]he DPP often likes to set fires, and then have the KMT come put out the fire, but this time the KMT is unwilling to intervene in related matters.”

Their statements have become fodder for opponents of KMT candidate Chiang Wan-an in the Taipei mayoral election to be held on November 26. Fai and Lee are both advisors to Chiang, who is leading in the polls. While Chiang “welcomed” Pelosi to Taiwan, the spokesperson for DPP candidate Chen Shih-chung suggested Chiang holds different views in private.

Brian Hioe, a Taiwanese-American who is a founding editor of New Bloom, a leftist activist magazine inspired by the Sunflower Movement, said the KMT leadership’s visions for reform are being hindered by factional disputes.

“Splits continue to be deep within the KMT and pan-Blue camp,” he wrote in an email. “While current chair Eric Chu has made efforts to change the image of the party to make it appear less pro-China and more pro-American, when Pelosi visited Taiwan, deep Blue groups such as the New Party and Chinese Unification Promotion Party demonstrated the visit.”

The New Party is a Chinese nationalist party aligned with the KMT that supports the “ideal of peaceful reunification.” It rarely runs its own candidates but supports KMT candidates. Its backers viewed Pelosi’s visit as a political stunt to help the DPP. They protested outside the Legislative Yuan, blaming Pelosi and Tsai for China’s missile launches.

Hioe pointed to other examples when the KMT had to play damage control. In June, KMT Director of International Affairs Andrew Huang accepted China’s claim that the Taiwan Strait is not international waters. After much criticism, KMT leadership held a press conference in Taiwan welcoming foreign vessels into the strait.

The assassination of Shinzo Abe also brought out disagreements within the KMT coalition. Former presidential nominee and party chairman Hung was among some who criticized the Tsai administration for lowering the flag at government offices to half-mast in respect of Abe, a figure she admonished for his refusal to apologize for war crimes committed by Japanese forces during World War II.

However, the KMT local party offices also lowered their flags. Not doing so would be viewed as being disrespectful towards a key regional ally. Doing so, on the other hand, antagonized some hardcore Chinese nationalists within their coalition.

“Eric Chu continues to face challenges in his rebrand attempt from deep Blues and it is expected that splits between would-be-reformers and the deep Blues will grow increasingly severe as time goes on,” Hioe said.