How to Push Back Against Russia? Ukraine's Defense Industry Could Help. 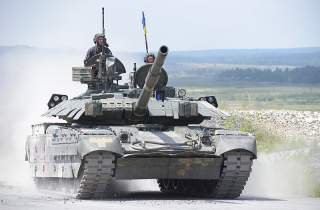 The global balance of power is in transition. A global order that was established after World War II and the collapse of Soviet Union is now evolving and often dysfunctional. We are witnessing the expansion of a multipolar world, and the risk of conflict is intensifying due to an increase in the number of influential players around the world.

Ukraine is at the epicenter of these changes and the interests of many of the world’s major powers. It is the key to balancing Russia’s global ambitions. Since its military aggression in Ukraine in 2014, and even earlier, starting with its war with Georgia, Russia has continuously tried to destabilize and diminish the global-security system.

This was done with only one aim: for Russia to reassert itself under a new post–Soviet sphere of influence with new borders, both physical and psychological. President Vladimir Putin made this clear in 2007 during his speech at the Munich Security Conference, where he complained that “the United States has overstepped its national borders, and in every area.”

Of the tools Russia uses to gain geopolitical influence, the most crucial is the “diffusion of tactics.” These tactics involve various methods of influence, ranging from military conflicts to the manipulation of national political and economic systems through disinformation and proxies, as well as cyber warfare.

Faced with such threats, Western political and security systems are vulnerable. Democracy requires public trust and a bureaucratic consensus to survive. Putin knows this, which is why he has sought to undermine these pillars of democratic stability.

Similarly, the United States and its allies should respond to the Kremlin’s challenges by attacking Russia where it is most vulnerable: its exports of fossil fuels and exports of weapons.

In the oil and gas sector, the West has been assertive in countering Russian aggression by sanctioning Russia’s energy industry and exporting shale oil and gas from the United States. But in the defense industry and defense trade, on the other hand, there has not been the same level of action by the West.

This is where Ukraine has a critical role to play. There are just a few countries in the world that have full cycles of defense production. Only the United States, France, Russia, China, and Ukraine cover virtually all technological capabilities in the defense space.

Russia’s arms trade poses threats to global security. The Kremlin uses defense technical cooperation as a means to achieve its geopolitical goals. Moscow pursued this policy during the Cold War by dividing the world into sectors of strategic influence. Back then, the United States was the counterweight to this destructive Soviet strategy, and it must once again assume this role.

In this context, Ukraine can play a key function in aiding the United States. Ukraine is a country of leading defense capabilities. Its national infrastructure was built on and centered around defense.

For over twenty years, the United States and the West have lacked a strategy to effectively leverage Ukraine’s defense capacity by integrating it into NATO. These capabilities could clearly create additional value for NATO.

Russia is keenly aware of this. As result, the Kremlin has had as one of its principal goals the subjugation of Ukraine in order to prevent the West from being able to utilize its potential. Moscow possessed plans to seize eastern Ukraine long before its invasion in 2014. Russia had targeted this region of Ukraine because it hosts critical elements of the Soviet defense and space industries, and the technologies that are produced there are difficult to replicate. Russia could not allow these assets to continue to exist in an independent and Western-oriented Ukraine.

Recent history demonstrates how important Russia views its former Ukrainian defense base. On December 2, 2013, a high-level Russian delegation chaired by Vice-Prime Minister Dmitriy Rogozin visited defense factories in the eastern Ukrainian cities of Dnipro, Zaporizhia and Mykolayiv. Not coincidentally, the following day, then president of Ukraine Viktor Yanukovich refused to a sign the Ukraine-EU Association Agreement, which is a political and trade framework that would have brought Kyiv even closer to the West and moved it further away from the influence of Russia.

In essence, the Ukrainian defense industry is Russia’s natural competitor. And with Western support, it could seriously diminish Russian influence around the world. The West, and the United States in particular, must take advantage of Ukraine’s inherent potential. By working with Ukraine more closely, the West will be able to contain Russia’s geopolitical influence.

To do this, however, Ukraine must also make itself more attractive as a partner, especially by pursuing critical political and military reforms. Ukraine’s legislative framework for defense reform was developed out of necessity following the 2014 Maidan Revolution and Russia’s annexation of Crimea and invasion of eastern Ukraine. And with presidential and parliamentary elections taking place in Ukraine next year, now is the time to follow through on this framework.

The Ukrainian defense industry should be refocused to meet NATO standards and requirements, taking aim at replacing Russian and Soviet weapons that are used by current NATO member-states. NATO members like the Czech Republic, Hungary, Bulgaria, Italy and France should not be collaborating with the Russian defense sector. The Ukrainian defense industry and its products represents a viable alternative for these countries.

In addition, NATO countries should begin cooperating with Ukraine’s defense industry by creating joint products that could replace existing Russian exports to third markets such as India, the Middle East, and Latin America. Such substitution is critically important, not only because arms exports are an essential source of income for the Russian defense industry, but also because Russia traditionally exploits defense technical cooperation to gain political and strategic influence in countries around the world.

Such expanded cooperation between Ukraine, NATO and the West would be mutually beneficial. The integration of the Ukrainian defense and aerospace industry into Western defense and security structures, as well as the country’s eventual accession to NATO, would contribute substantially to both regional and global stability.

Denys Gurak is a senior fellow at the Potomac Foundation and was deputy director general of Ukraine’s state-owned arms manufacturer Ukroboronprom 2014–18.