How Putin and Russia Lost Big in Ukraine 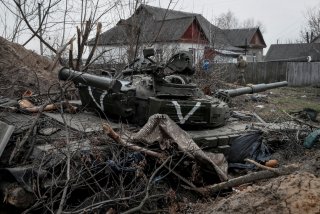 The Congressional Research Service, a non-partisan research think tank that reports to the United States Congress, released a report detailing the military and intelligence aspects of the ongoing war in Ukraine.

The report covers events from February 24 up until roughly the six-month mark of the ongoing war. It points out the myriad mistakes and errors the Russian military has made, as well as the multiple successes Ukrainian forces have had on the battlefield—sometimes against overwhelming odds.

One factor has been especially impactful in Russian failures in Ukraine: logistics. Without enough bullets, beans, and bandages in the right place at the right time, the Russian war machine has been unable to advance on the battlefield efficiently.

“The Russian military’s logistics issues limited its offensives in almost all sectors. Russian units appeared poorly supplied (for example, some captured Russian food reportedly was expired and inedible) and seemed to advance past available logistics support,” the report said.

Ukrainian air defenses, though in no way comparable to those of NATO countries—or indeed that of Russia—have been enough to force Russian aircraft to stay out of Ukrainian airspace in the west and in some places in the east as well.

“In particular, many analysts were surprised at the apparently limited role the VKS played at the outset of the invasion, beyond the initial bombardment. Russian ground forces appeared to have limited air cover, with Russia primarily relying on Iskander-M SRBMs or air-launched cruise missiles launched from VKS bombers inside Belarus and Russia, especially to target Ukrainian infrastructure and other targets in western Ukraine.”

“Many observers and analysts have been surprised and impressed by Ukraine’s military resistance. Despite having a smaller military than Russia, and a quantitative and qualitative disadvantage in equipment and resources, the Ukrainian Armed Forces (UAF) have proven resilient and adaptive,” the Congressional Research Service explained.

“The UAF has demonstrated greater flexibility than the Russian military and a willingness to adapt to changing conditions to exploit Russian missteps and weaknesses. The UAF also has benefited from high levels of motivation and recruitment, as well as significant Western security assistance and training.”