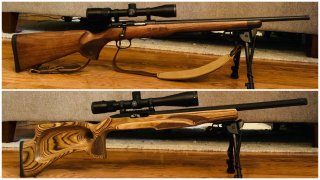 The CZ 457 Royal underwent some small, but pretty great changes over this past year. CZ has addressed some of the complaints many Americans had to better appeal to this demographic, and it’s safe to say they’ve succeeded! The new Royal is accurate, reliable, and easy to shoot.

Let’s start with accuracy - there are no sights included on the Royal, but there is an integrated, 11mm dovetail that provides a nice platform for different scopes. Even without sights, it’s easy to achieve excellent five-shot groups. From 50 yards, my average grouping was just .8”! The Royal fed all ammo well, with no malfunctions whatsoever throughout hundreds of rounds.

The Royal includes a premium Turkish Walnut stock, precisely fitted into the metal surrounding it, along with a decorative forend tip that calls back to early rimfire rifles. There’s a high, flat, American-style comb, and lots of fine-line checkering on both the forend and buttstock. The pistol grip also features laser-cut, checkered panels on both sides. Overall, the aesthetics of the Royal are truly unmatched.

Now for the biggest American upgrade: the push-to-fire safety. Previously, the CZ 457’s safety was “backward,” meaning it was “on” when pushed forward and “off” when pulled back. Many American customers didn’t like this feature, so CZ redesigned it and switched the positions. Another trigger upgrade is the lighter striker, which shortens the lock time and improves accuracy.

The trigger is also adjustable for pull weight, sear engagement, and overtravel. Mine shipped with the trigger set around 3 lbs, but others have noted that theirs shipped set even lower. It adjusts as advertised, and the lowest I’ve gotten it down to safely is about 1 lb 10 oz.

The Royal comes with a detachable, five-round capacity, steel magazine, which sits flush with the bottom of the action and offers a nice, clean look. If five rounds just won’t cut it for you out in the field, there are also ten-round capacity magazines available that you can store and use when needed.

If you purchase this rifle, you’ll be able to choose between either a 16.5” barrel or a 20.5” barrel. The first measures 28” overall, while the second measures 32” overall. There’s a minimal difference between the two in terms of weight, and both MSRP for $769, so it really comes down to user preference.

If you use the CZ 457 Royal for hunting, you will not be disappointed. It’s a very accurate and reliable weapon that will serve you well out in the field.