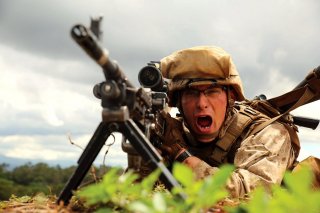 At 7:00 pm on September 30, 1950 a submarine surfaced in the cold waters off the coast of northeastern Korea. In the moonlit darkness, dozens of armed men clad in U.S. military uniforms poured out onto the vessel’s slippery ninety-five-meter-long deck and hastily set about inflating seven rubber rafts, the last laden full of mines and explosives.

Others pried open a peculiar bulbous container behind the submarine’s conning tower, revealing a wooden motorboat nested inside. Through selective use of ballast tanks, the submarine pitched her stern into the water, allowing the skimmer to slide off her deck.

The submarine was USS Perch, one of many Balao­-class submarines commissioned by the U.S. Navy late in World War II. The soldiers were Royal Marines from the UK’s No. 41 Independent Commando unit. And their shared mission was to destroy a railway tunnel near Tanchon, North Korea—150 miles behind enemy lines.

Perch’s skipper, Lt. Commander Robert Quinn, peered nervously at the coastline while sailors hooked tow lines between the skimmer and the rubber boats. An enemy gunboat or concealed coastal battery could spell disaster. Worse, he had learned that morning that North Korea had deployed mines and that he should not venture into waters shallower than fifty fathoms (three hundred feet) deep. That’s why he had surfaced Perch four miles offshore.

But then things began to go wrong. The skimmer’s engine refused to start, having taken on water in its submerged hangar. Then a North Korean patrol boat trawled past the landing zone—followed by two trucks on the coastal road that deposited troops on the beach. It seemed Perch had been detected, perhaps by radar, and an armed welcoming party was awaiting their arrival.

The raid had failed before it had even begun. But neither Perch’s crew nor the Royal Marines were ready to give up on the Korean war’s only submarine combat mission.

The Tanchon raid wasn’t Perch’s first special-ops mission. Commissioned early in 1944, Perch embarked on seven Pacific war patrols, rescuing downed pilots and narrowly escaping destruction twice. But her most unusual mission took place March 20, 1945 when she launched a team of Australian commandoes in kayaks to conduct reconnaissance near Balikpapan, Indonesia—none of whom were heard from again.

The following night, Perch dispatched a second team that succeeded in blowing up a key oil pipeline—though only two commandoes survived. Meanwhile, the surfaced Perch encountered an armed freighter which she set ablaze in a furious gun duel.

The Borneo mission exemplified the awkward and dangerous nature of submarine amphibious operations. Submarine-to-shore transit was extremely dangerous and time-consuming, forcing submarines to remain exposed on the surface. And if the submarine had to dive, there was no way to communicate with the hapless shore party.

In the epic Makin island raid in 1942, two submarines deployed a battalion of Marine Raiders to a remote Japanese-held atoll. The Raiders overran the island, but then spent twenty-four hours stranded by rough seas before they could paddle back to their submarines.

The postwar Navy wanted to improve its naval special ops methods, so in 1948 Perch underwent a special conversion at the Mare Island shipyard alongside sister-submarine Sealion.

Two of Perch’s four diesel engines and all ten torpedo tubes were replaced with accommodations for a whopping 110 raiders. The wardroom became a surgical theater to treat casualties, and a new snorkel system allowed Perch to run her engines while shallowly submerged. Finally, a thirty-six-foot-long hangar designed to carry a Landing Vehicle Tracked (LVT) amphibious tractor to ferry troops ashore was emplaced behind the conning tower.

Now armed with only two forty-millimeter anti-aircraft guns, Perch was re-designated transport submarine ASSP-313. Over the following year, her crew routinely undertook amphibious exercises with Marines from B Company of the 5th Marine Regiment, and on occasion U.S. Navy Underwater Demolition Teams and Army Special Activities Companies in amphibious exercises.

Two months after the outbreak of the Korean War, Perch arrived at Yokosuka, Japan her crew eager for action. In theory, Perch could launch amphibious raids along North Korea’s coastline, sabotaging railway tunnels and compelling Pyongyang to divert troops to protect its coastal supply lines.

But the Marines Perch had trained with were committed to conventional operations, and General Douglas McArthur feared things could to easily go wrong with submarine-launched raids.

Meanwhile, on September 15 the Royal Marine’s No. 41 Independent Commando under Major Douglas Drysdale arrived in Japan, disguised in civilian clothing. Given U.S. uniforms and weapons, some began training for amphibious ops with Perch. By all accounts, the crew and the marines bonded quickly, the latter fond of the hearty steak-and-eggs regimen offered by Perch’s galley.

Finally, on September 20, McArthur authorized a submarine raid involving no more than seventy personnel. Five days later, Perch departed Yokosuka with sixty-seven Royal Marines on board, including Drysdale, bound for the coast of Tanchon. But Perch’s initial attempted landing met swiftly with failure, as described at the beginning of the article.

The mission compromised, Quinn submerged Perch once the equipment was stowed and proceeded to a rendezvous with destroyers USS Maddox and Herbert J. Thompson. The following evening, Quinn arranged for Thompson to stage a diversionary attack on his original target while Perch dispatched her raiders on a secondary target to the northeast, with Maddox two miles west of Perch available for backup.

The second raid began at 7:45 pm November 1 after a patrol boat was drawn away by Thompson’s barrage. This time Suzuki’s freshly repaired engine worked, towing the seven rafts laden with marines and explosives to within five hundred yards of shore.

The marines paddled ashore and fanned out across the beach, forming a defensive perimeter, while combat engineers lugging explosives advanced towards the railway. Along the way, they discovered coastal defense pillboxes under construction and drove away a group of North Korean guards near the railway tunnel.

Now it was a race against time as the engineers placed explosives that would bury the tunnel in a landslide, and pressure-sensitive mines on both ends to delay repairs.

Firefights erupted with probing North Korean patrols, which eventually mounted a concentrated flank attack. Quinn wrote about his consternation viewing the action from Perch in his report: “We could see the gun flashes and moving lights. We could hear the crack of rifles and the stutter of machine guns and yet we were just sitting there, powerless to help. Finally, we saw a blinding explosion followed by instant shock waves that reached far out to sea. We knew the mission was completed, but we didn't know at what cost."

The detonation occurred at 1:15 am, five and a half hours after Perch had surfaced. The Royal Marines fell back to the beach and paddled away on their rafts, exchanging fire all the way. They rendezvoused with the skimmer, which towed them back to the Perch.

When the Marines board Perch at 2:39 AM, they brought with them a fallen comrade—Private Peter R. Jones. He was accorded a burial at sea with a twenty-one gun salute from Maddox. Quinn lowered his ship’s UN ensign to bequeath to next of kin.

The Tanchon raid was the only U.S. submarine combat operation during the Korean War. The Navy would actually carry out many more special operations in Korea—it simply had concluded submarines involved too much risk for too little benefit, especially given the newly apparent mine threat. Besides, winter weather would soon freeze out even non-combat submarine patrols. Future operations would often involve APDs, high-speed transports converted from destroyer escorts.

Perch’s career was far from over, though. Fifteen years later from 1965-1966 she deployed several times to Vietnam, dispatching Underwater Demolition Teams on amphibious missions—becoming not only the sole U.S. submarine to see action in Korea, but to have undertaken combat operations in three wars.