How Russia Is Getting Ready for War in the Arctic 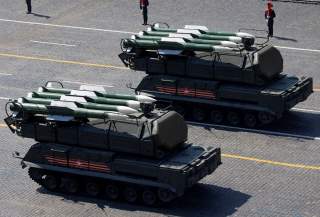 Sharp Russian-NATO tensions on the Baltic sea and in the Kerch Strait can obscure day-to-day developments in a more remote, but increasingly militarized zone of great-power competition: the Arctic.

As Russian president Vladimir Putin stated several years ago, “Over decades, step by step, Russia has built up, strengthened its positions in the Arctic, and our goal is not only to regain them, but also to qualitatively strengthen them.”

And Russia has, in fact, heavily bolstered its Arctic presence in the recent years. There are forty Russian Icebreakers operating in the Arctic, supported by six Russian military bases equipped with several S-400 anti-aircraft missile systems.

More recently, Russia’s Ministry of Defense committed to a new wave of investment into its Arctic ground presence with an updated snowmobile and infantry arctic warfare kits.

The snowmobile, currently unnamed, is being developed in Tatarstan by the defense manufacturer “Kom.” According to Kom’s Director Vasiliy Mankovskiy, “we have made a prototype batch of two units. We hope to enter into serial production next year.”

The snowmobile is slated to come in two variants. The first is a traditional light vehicle designed for extreme low-temperature conditions in the northernmost reaches of the Arctic. The other is an amphibious snowmobile; that is, it fulfills all the functions of a regular snowmobile but can also convert into a light water vehicle.

While the entire project costs 250 million rubles or $4.2 million, individual production costs will likely not be finalized until the snowmobile comes further along in its development cycle. Also unknown is the price difference between the standard snowmobile and its amphibious variant.

This latest snowmobile is not to be confused with Russia’s Pecheneg Machine Gun-equipped Berkut, which does not boast amphibious features. Kom’s snowmobile is unlikely to feature any armaments, suggesting a light-reconnaissance role.

According to Kalashnikov, “all features of this equipment were tested by experts from Kalashnikov Concern and servicemen from the Russian Defense Ministry in a March 2018 Arctic expedition on the Yamal and Taymyr Peninsulas. Temperatures during testing reached -47 °C, winds of 25 meters per second (about 59 miles per hour), and humidity levels of 100%.”

Russia’s GLONASS satellite was also tested during the expedition, a salient development on the heels of recent reports that Russia is developing a credible capability to jam GPS signals in parts of the Arctic.

None of Kalashnikov’s items are revolutionary in function. Still, combining them into a mass-produced package can reduce the long-term costs of equipping Russian soldiers as Russia commits to an ever-larger military presence in the Arctic.

New snowmobiles and arctic warfare kits seem minor when taken individually, but they add up into what Major-General Vladimir Dvorkin called the “creeping militarization of the Arctic.” As Dvorkin put it to Russia’s International News Agency (RIA):

“[I]t is still fair to talk about Arctic as a peaceful region. It is here, unlike anywhere else, that unprecedented cooperation among countries arose on the basis of peaceful partnership. But continued tensions in relations between Russia and the West are unfortunately leaving their mark on the Arctic, laying the groundwork for the continued ‘creeping militarization’ of the region.”